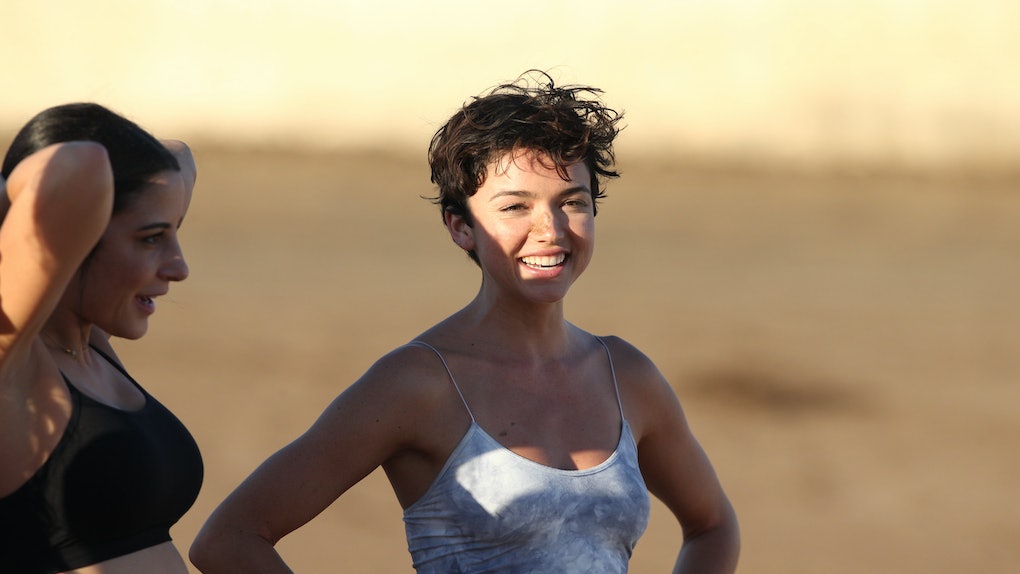 Season 22 contestant Bekah M. is already getting attention from Bachelor Nation and it's just Week 2. The Los Angeles nanny not only has a unique look we haven't seen on the reality show in the past — gasp! short hair! — she emits an effortless cool girl demeanor that clearly has Arie infatuated, too. Social media usually paints a picture of someone living their best life and Bekah from The Bachelor's Instagram is full of humor, adventure, and free-spirited fun. Plus, she's not afraid of selfies, because why not?

From the moment Bekah pulled up in a Mustang on the premiere, it was clear that her personality would stand out. "Bekah has definitely set the bar high," Arie admitted. "She is stunning and she is smart and she is funny. At the end of the day I want to get married and there are so many amazing women here, it's making me feel really positive about that." Hmm. And their chemistry didn't stop there. The couple's relationship has continued to blossom — they even indulged in a sultry make-out sesh and snuck off together to get more time. So now that Bekah's clearly one to watch when it comes to Arie's season, what does her Instagram reveal?

1. She's Not Afraid to Make Fun of Herself

Bekah gets it. "I'm not here to make friends, I’m here to steal your man," she wrote on one post asking people to tune into her Bachelor debut.

Case in point: pretty much every photo we've every seen of her.

4. She Used to Be Blonde and Of Course She Rocked It

5. She Switches Up Her Looks

Bekah has also had a pink hairdo at one point, but it appears she's a natural brunette.

6. Her Style is Eclectic and Chic

It's hard to get a real sense of the Bachelor contestants' fashion sense right off the bat sometimes. It seems like they're decked out in gowns 80 percent of the time and in outfits for particular occasions (like Demolition Derby) the rest of the time. We haven't seen much of Bekah's off-duty non-cocktail look thus far, but we think she has great taste whether she's going for fancy or casual.

Her travel photos are gorgeous, of course.

Bekah has spoken about her love for rock climbing on TV a number of times, so we're not surprised to see her in action on social media.

Bekah appears to have a pet kitty herself. She remarks in one post that she "pretends to hate dogs" and in another she mentions going to a cat cafe.

She can draw, too?

11. And an Outdoorsy One

"I'm like a mix of gentle and nurturing, but punctuated by moments of excitement and adrenaline," she described in her intro on on the show. "I know that Arie is a former race car driver which is a good sign. I'm a very adventurous, spontaneous person..."

12. Climbing Isn't Her Only Sport

She snowboards in addition to climbing. Perhaps we'll see her on the next installment The Bachelor Winter Games?

13. She Comes From a Big Family

Bekah has four siblings according to her Instagram, and they frequently make appearances on her posts.

Bekah's age is a topic of discussion this season and despite all the mystery, she's reportedly 22. This photo from February 2016 is apparently from her 21st birthday.

Bekah's lighthearted spirit, sense of humor, and wild side make her one to watch this season. “I’m simple, I’m no drama, I’m easy to please,” she summed herself up to Arie in the latest episode. Got it.

We look forward to seeing more of her as time ticks on.