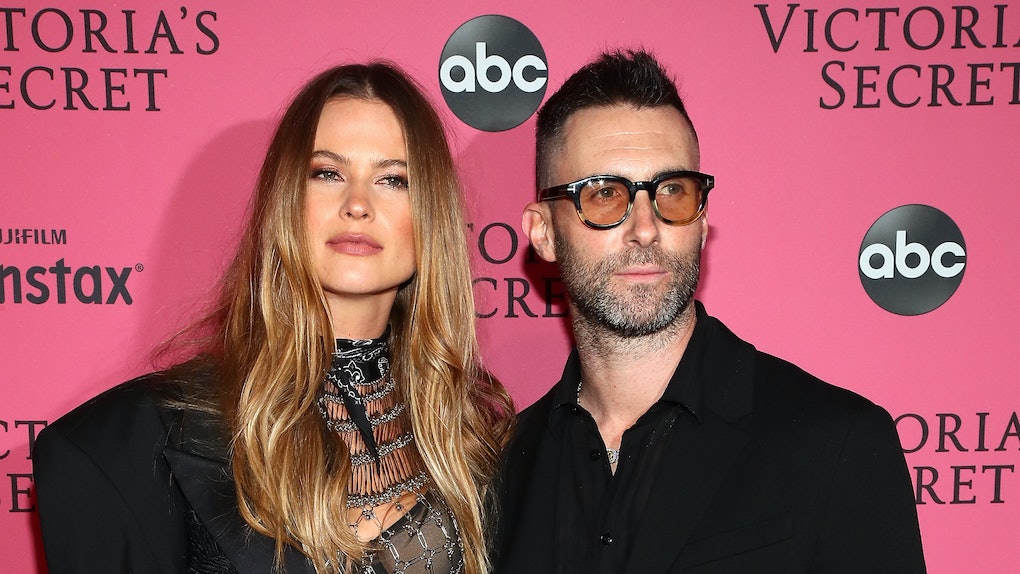 Maroon 5 took on the Super Bowl LIII Halftime Show on Sunday, Feb. 3, and you know Adam Levine's family had their eyes glued to the screen as he performed. Behati Prinsloo's Instagram of Dusty and Gio watching Adam Levine's halftime show is honestly... better than the halftime show. Facts are facts, America!

I kid, I kid. Obviously, two kids sitting on the floor watching TV is not as entertaining as watching the Super Bowl Halftime Show. But it is so very cute! The Victoria's Secret model and mother of two took to the 'Gram on Feb. 4 to show the world what her and Levine's daughters, Dusty and Gio, were up to while Levine and the rest of Maroon 5 performed. The answer is: they were watching dad!

Prinsloo posted a picture to her Instagram showing her two little nuggets (and Levine's biggest fans) watching their dad take on the biggest halftime show of the year. "We love you dada❤️!!!! #superbowl53," Prinsloo said in her caption.

Her last Instagram from the Super Bowl was a sweet pic of her and Levine backstage (seemingly after the performance, since Levine has his shirt off).

"No words can describe all of this," she said. "I love you."

Oh, what a night.

Travis Scott also performed during the show, and lucky for fans, Kylie Jenner posted a video of Stormi watching her dad perform as well.

Once all the dust had settled on the Super Bowl, Levine took to Instagram to talk about the experience of doing the Halftime Show.

At one point during the performance, drones flew up from the crowd and spelled out "ONE LOVE" above Levine as he sang. He talked about his decision in his Super Bowl Instagram post.

"When we accepted the responsibility to perform at the SBHTS, I took out my pen and just wrote. Some of the words that came to me in that moment eventually made their way onto the incredible lanterns that flew high and low tonight," he wrote in the caption. "We thank the universe for this historic opportunity to play on the world’s biggest stage. We thank our fans for making our dreams possible. And we thank our critics for always pushing us to do better. One Love. ❤️"

More like this
Prince Philip, The Duke of Edinburgh, Has Died At The Age Of 99
By Noelle Devoe
Why Did Addison Rae Deactivate Her Twitter? Fans Think This Is The Reason
By Brandy Robidoux
Britney Spears' Instagram Message To Fans "Concerned With Her Life" Is So Positive
By Brandy Robidoux
Stay up to date