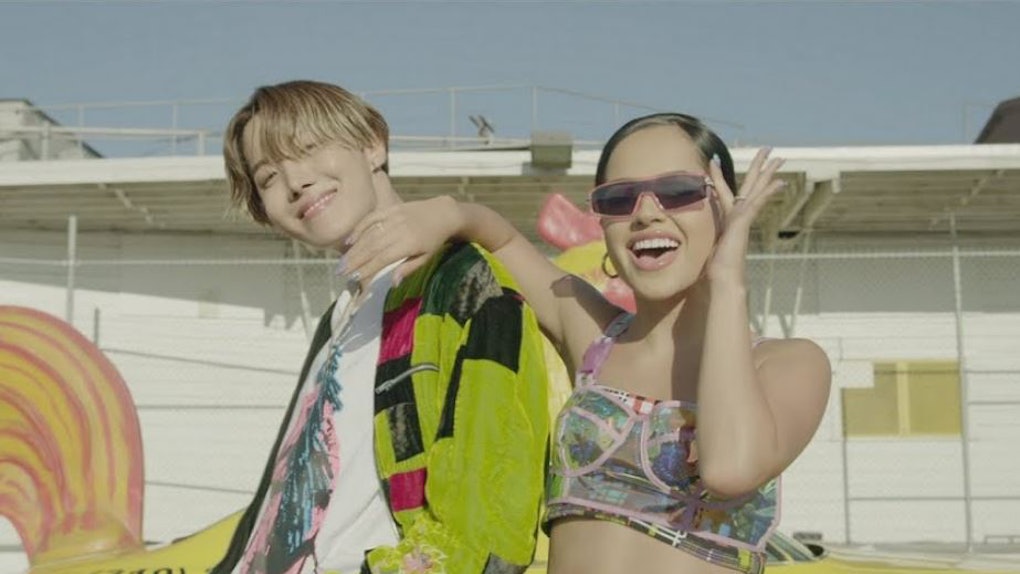 Becky G has balanced success in two very different music markets for years. The Mexican American pop star notched her first English-language Billboard Hot 100 Top 20 hit in 2014 with "Shower" at just 16 years old. After that, Becky transitioned into Latin pop, dropping hit Spanish-language singles like 2017’s “Mayores” and 2018's “Sin Pijama” with Natti Natasha, each video garnering over a billion views on YouTube. On July 10, Becky released her single "My Man," which mixed lyrics in both English and Spanish. But it's not her first multi-language song. Becky G's quotes about working with BTS' J-Hope on their 2019 trilingual hit, "Chicken Noodle Soup," are a reminder of how the walls the music industry built around languages are beginning to crumble.

Becky's days of considering whether her songs will be released and promoted under the English or Latin imprint of her label, Sony, are behind her. "Now, when I go into the studio, I don't go in thinking, 'Oh, today we're going to make a Spanish song, or we're going to make an English song,'" Becky tells Elite Daily. "It's just, we're going to make a song and whatever language it comes out in — Spanglish, English, Spanish — so be it."

That was what happened when she and J-Hope hit the studio to record "Chicken Noodle Soup." The song fused the English-language hook originated in Young B's 2006 hip-hop classic of the same name with brand new Korean and Spanish verses courtesy of J-Hope and Becky. "[That] was, for sure, this groundbreaking moment for me and my career, but also for J-Hope," Becky says about her participation in the collab. "I think we both shared this mutual feeling of like, ‘I’m happy it was you,' you know?"

Becky gives all the props to J-Hope for thinking outside of the box and reaching out to her to be part of the song. "He's the one [who] found me," she says. "I just feel so blessed to have been a part of something so unique, because I've always believed ... [It] was one thing I remember texting him ... 'We do speak the same language, and that language is music.'"

That belief was proven a reality. "Chicken Noodle Soup" debuted at No. 81 on the Billboard Hot 100 and became the most-viewed music video in 24 hours by a K-Pop soloist. "I love that [it's] just manifested like this amazing movement," Becky says about fans of all languages embracing the track. "Now, I don't just listen to Spanish music or English music. Now, I listen to French rap and K-Pop, and you can listen and you can enjoy music even if you don't necessarily understand what the lyrics are, you can feel it still."

Now, Becky is doing the same in her own music. Her new bilingual single "My Man" is being released and promoted under the English and Latin imprints of her label equally.

For Becky, who's been grinding for over six years in an industry that often boxes singers into one genre or another, having her label embrace a song that lets both her languages shine is a full-circle moment. "It's about time!" she says. "To me, it's only right."

Becky sees the synergy of her labels as just one more step in the right direction for her career. "I've been fighting since I was 14 years old and only [in 2019] was I able to release my first ever album, [Mala Santa]," she says. "So there's a lot of milestones that I have just now been able to accomplish, and [ones I] have yet to accomplish." Working with people who believe in her vision is more important to Becky now than ever. "I've always believed in myself, but when you have others jump onto the project and have that same belief for your vision it means everything."

Fans are ready to see what Becky's vision is for the future. If "Chicken Noodle Soup" and "My Man" are any indication, whatever comes next will definitely thrill fans.