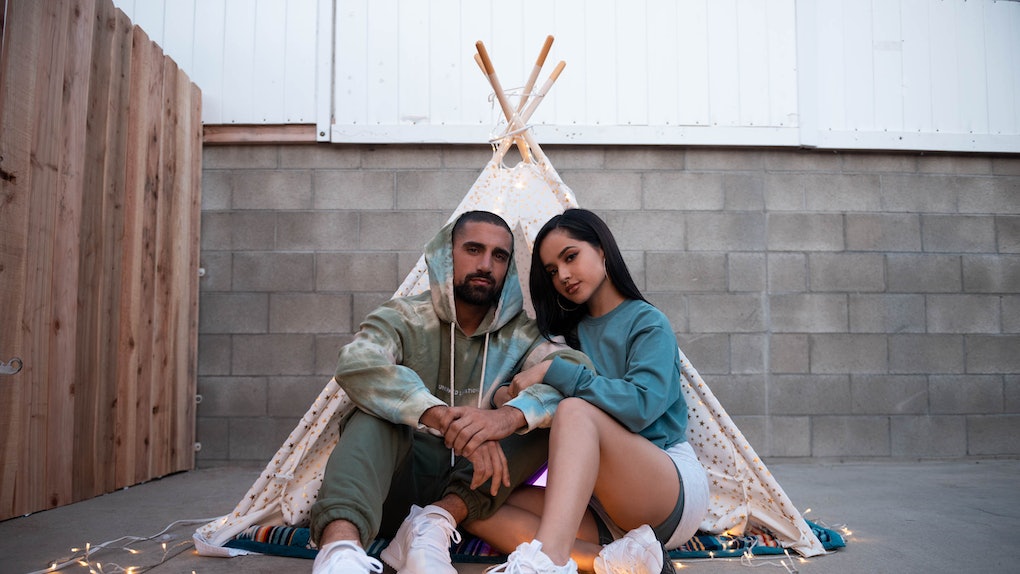 With over 25 million followers on Instagram and 2.9 million on TikTok, all eyes and ears are on Becky G pretty much at all times. Fans hang onto every move she makes on social media, whether it's dropping a new hit single, a new photo featuring the next gorgeous outfit you'll have to recreate, or a sweet selfie with her boyfriend of four years, Sebastian Lletget. Now, with Becky G's latest single "My Man," everything fans love about following her on social media has been baked into the infectious new song's music video, including a look at what her relationship with Sebastian is really like behind the scenes.

While Becky and Sebastian aren't shy about their relationship, she acknowledges fans have gotten a pretty curated picture of their dynamic over the years. "I think that there's this thing with a lot of athletes, especially in [Major League Soccer]," Becky tells Elite Daily about Sebastian, midfielder for the L.A. Galaxy. "There's a lot of funny guys that you would never know are funny, because through their social media they’re so professional. There's [just] all these pictures of them on the field."

That's why Becky is super excited about her new song "My Man." The track is an ode to her boyfriend, but not in the sappy, sentimental way you might expect. "If you listen to 'My Man,' I'm mostly kinda talking sh*t," she says. The song samples “La Gran Señora” by the late Regional Mexican singer Jenni Rivera, and puts a fun, modern twist on the original song's message.

"The backstory to that song is so amazing," Becky explains. "She's singing from the perspective of what she witnessed her mom go through growing up ... and I think it's important to see things in different perspectives ... she's saying, 'El es mi hombre, y yo su gran señora.' [('He is my man, and I am his grand lady.')] She's basically having a conversation with the other woman." In Becky's version of "My Man," she sings in both English and Spanish about her man being... well, all hers.

Filming the music video while quarantining amid the global coronavirus pandemic opened up an opportunity to show her fans a side of her man (she calls him Sebas) and their relationship they've never seen before. "Sebas, like, he's a fool," she says. "We have so much fun [together]."

The video, which sees Becky and Sebastian compete in an endless series of quarantine challenges, perfectly spotlights that dynamic. "I think, if there was a full production, like official music video set up, then [Sebastian would have been nervous]. I'd probably have had to prep him and coach him through it a little bit. But with this video, it's just what you see is what you got. It's just us, you know?"

From Becky absolutely rocking Sebastian in a game of beer pong to the couple squeezing into one super-sized tie-dye shirt, there's no shortage of shots that just scream "couple goals."

That's why one line in the song — the one when she sings about "the big rock on my hand" — might have fans wondering if Becky and Sebastian are taking their relationship to the next level.

Well, don't let your mind wander too far. Becky says she was leaning heavily into the original story behind "La Gran Señora" while writing "My Man."

"[In it], she is the mother. She even sings, 'I'm the mother of his children, and with those kids I wear the crown of the house.' So ... we were being so about that," Becky says. "But there is no actual rock on my hand — at least not yet — just to clear that up."

Rock or no rock, it's clear Becky and Sebastian are in an amazing place. Something tells me couples all over the world will be jamming out to "My Man" and channeling this power couple's playful energy this summer.

You can listen to "My Man" now on all major streaming platforms.