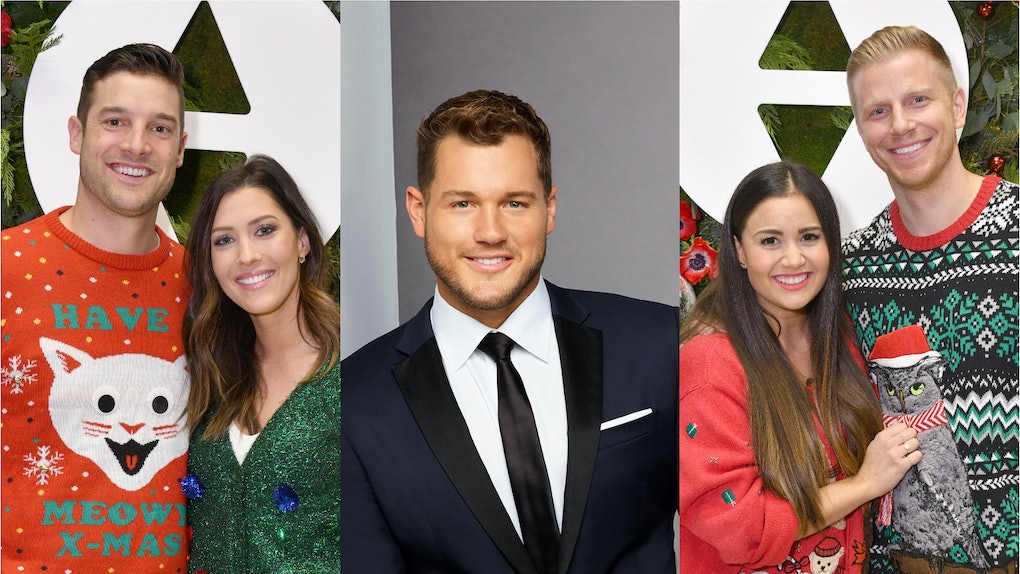 We're less than a month away from the premiere of Colton Underwood's season of The Bachelor, and Bachelor Nation still feels quite mixed about the franchise's new leading man. Because of the indecisiveness the 26-year-old showcased throughout The Bachelorette and Bachelor in Paradise, viewers aren't too confident about Colton's ability to make a lasting match. But take it from people who have been there — the Bachelor journey is difficult enough without fans' judgments. Between Becca and Garrett's advice for Colton and Sean and Catherine filling us in on the reality of post-Bachelor life, it's clear that fans should go a little easier on our newest Bachelor.

At Sleep Number's recent Under the Mistletoe event in New York City, the latest Bachelorette couple, Becca Kufrin and Garrett Yrigoyen, met with Sean and Catherine Lowe, who remain the only Bachelor pair to marry without the lead changing his Final Rose decision. Celebrating five years of marriage in January, Sean and Catherine are blunt about the challenges they faced after leaving their Bachelor bubble and trying to build a life together in the real world.

"I give Sean Lowe so much credit, because it is really, really tough to go into this position, walk in, and be like freaking God amongst girls and be like, 'I have my pick of whoever wants me,'" Catherine tells me in an exclusive interview for Elite Daily. "When he committed to me, that was it, and I give him a lot of credit... All the factors are against you, you don’t usually live in the same city, you don’t know each other very well, and it’s a very hard road."

As any casual viewer could surmise, the struggles often begin during the filming of a season. With so many available contestants at a lead's beck and call, how can a Bachelor even manage to make a decision? "I would just say [to Colton to] focus on the girl and don’t get distracted by all the other stuff, because there’s a lot of distractions that come along," Season 17 Bachelor, Sean, says.

Despite comparisons growing between Colton and the all-American Sean, the dad of two didn't watch his successor on Becca's Bachelorette stint earlier this year. Meanwhile, Garrett, the season's Final Rose recipient, still considers fourth-place finisher Colton a friend and wishes him the best for his own season. "Be true to who you are," Garrett advises Colton. "Don’t let outside influences affect your thought process, because you’re going to get a lot of negative comments and you’re going to get a lot of positive, but sometimes the negative feeds more than the positive ones."

Since their engagement aired in August, Becca and Garrett have been no strangers to facing online criticism, and Colton garnered his own haters for appearing indecisive toward his Paradise fling Tia Booth and seemingly fibbing about the seriousness of his relationship with Olympic gymnast Aly Raisman. Still, Becca recommends that Colton stay grounded as he watches his Bachelor journey on TV.

"He knows what’s right for him and his relationship," she says. "So everyone’s gonna have their two cents, but if he can just focus on him and the relationship, that’s all that matters."

Bachelor Nation will have to wait and see if a new couple will join the foursome's ranks in a few months, but we definitely need to take a chill pill when it comes to Colton's Bachelor suitability. Did we mention that he's probably spending most weekends hiding out in a house with his new fiancée?

"It’s such a bizarre, alternate reality, where you’re engaged to somebody [and] you can’t be public about it," Catherine says about couples' secret getaways in the immediate aftermath of filming. "And yet you’re planning your life and when you step outside that house, you’re no longer with them."

For now, we'll give Colton the benefit of the doubt when it comes to his success as Bachelor. He obviously has a tricky road ahead of him. Season 23 of The Bachelor premieres on Monday, Jan. 7 at 8 p.m. ET on ABC.