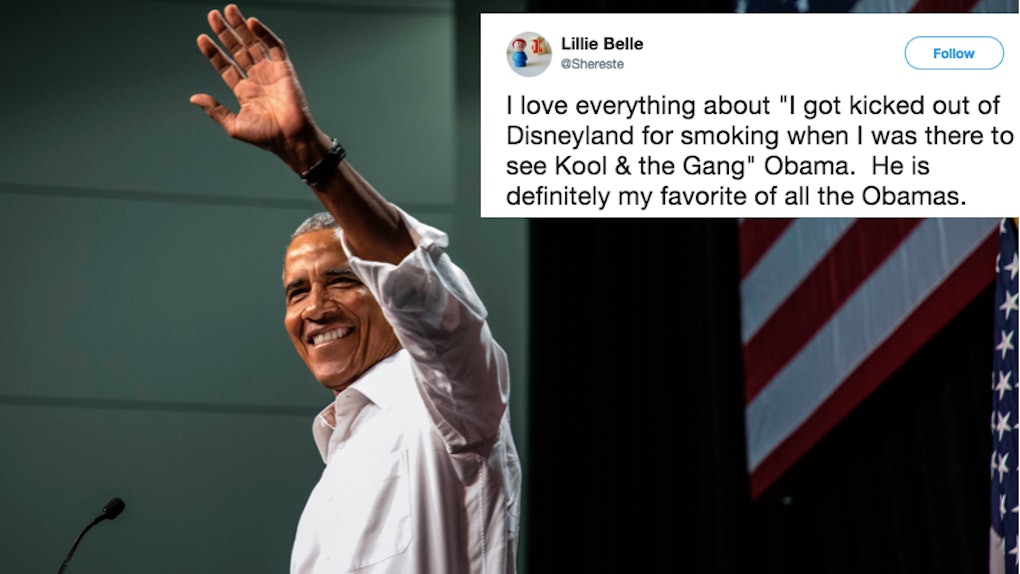 Since President Barack Obama has been out of the White House for almost two years now, it can be easy to forget how engaging his speeches are. With the 2018 midterm elections creeping up in November, Obama has taken to the road to stump for Democrats and encourage young people to exercise their right to vote this year. Along with his serious sentiments about the current state of politics in the United States, Obama managed to slip in a lighthearted moment during a recent speech in Anaheim, California. Barack Obama's story of being kicked out of Disneyland didn't relate to any political agenda, but Twitter is still very much here for it.

Obama was in California on Saturday, Sept. 8 to speak at rally for seven Democratic congressional candidates ahead of the midterm elections, per CBS News. In an effort to relate to the young voters in the Anaheim crowd, Obama recalled a time when he traveled to Disneyland in college to see a certain concert. "We came down here not to go to the Matterhorn or do Pirates of the Caribbean, but to see Kool and the Gang," Obama shared as he got into the story, per Newsweek.

After seeing the '80s group perform, Obama explained, "So we came down, me and a bunch of friends. After the concert, because we were teenagers you could still sort of hang out in the park, and we got in the gondolas." He continued, "And I'm ashamed to say this, so close your ears, young people. A few of us were... smoking on the gondolas." He then quickly clarified that they were regular cigarettes — not marijuana — after the California crowd cheered him on.

It turns out that smoking on the gondolas is enough to be escorted out of the theme park, because Obama continued,

As we’re coming in, there are these two very large Disneyland police officers and they say, ‘Sir, can you come with us?’ and they escorted us out of Disneyland. This is a true story everybody. I was booted from the Magic Kingdom.

LOL. Even though lighting up was enough to get Obama and his pals "booted" from Disneyland in the '80s, he did add, "At the end, they said, 'You’re gonna have to leave, sir, for breaking the rules of the Magic Kingdom, but you’re welcome to come back any time.'" So, Mickey Mouse is tough but fair.

The reactions to the story on Twitter ranged from calling Obama the "greatest of all time (GOAT)" to simply laughing at the funny story to sharing that moments like this are why people miss him as POTUS. Oh, and people also made sure to point out that Magic Kingdom is in Disney World, not Disneyland.

Even though Obama was kicked out of Disney for being a rebellious smoker in college, he made sure to assure the crowd that he knows it's a "terrible thing" and that he's stopped the habit.

To temper the story of his college experience, Obama also shared a more G-rated anecdote of when he traveled to Disneyland with his family as an 11-year-old. This tale brought with it a classic dad-joke moment when Obama referred to his childhood experience at the park, saying, "It was the bomb!"

Is it really an Obama speech if there isn't at lest one dad joke in there? I for one am always here for a good turkey pardon pun or the use of early 2000s slang.

Of course, Obama's not taking to the stage only to make the people laugh with amusing anecdotes. His Saturday appearance comes on the heels of a Friday, Sept. 7 speech at the University of Illinois at Urbana-Champaign. As he spoke to the crowd about the importance of voting, Obama finally called out President Donald Trump by name in a scathing rebuke of the current political climate. While he said of current divisive politics, this "did not start with Donald Trump," he also explained why Trump is a "symptom" of the problem. His harshest words for President Trump came when Obama said in a clear reference to the August 2017 Charlottesville attacks, "We're supposed to stand up to bullies, not follow them — especially Nazi sympathizers." Trump famously said at the time that there were "very fine people" in the crowd of far right marchers that included white supremacists.

It's clear that Obama is not playing around during his speeches, but a skilled orator like the the 44th POTUS can somehow manage to weave a tale about getting kicked out of Disneyland into a speech meant to energize voters without missing a beat — and Twitter is definitely here for it. In the words of Chance The Rapper on Saturday Night Live, "Come back, Barack."