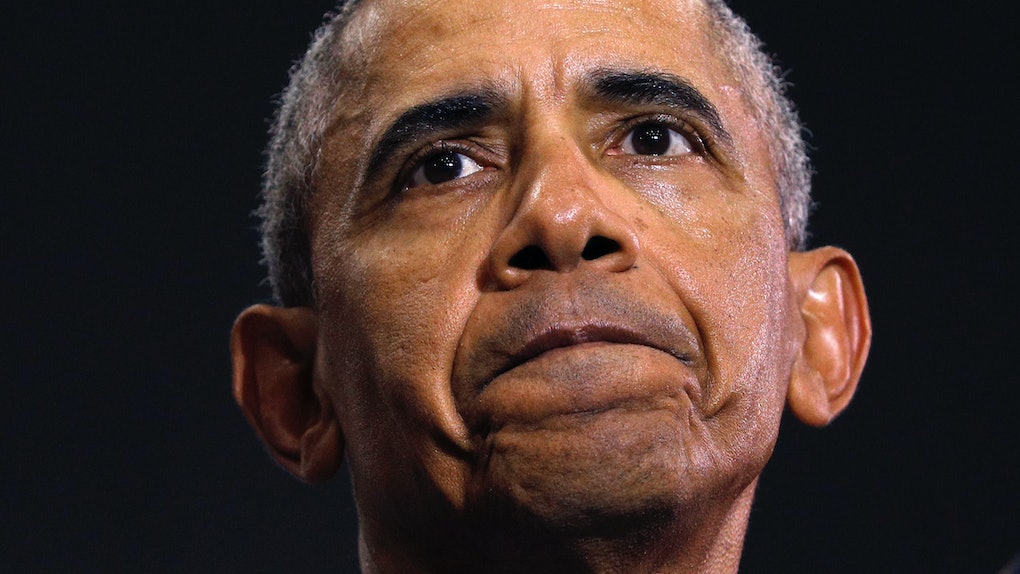 On Friday, March 15, the world was struck by another terrible mass shooting, when a gunman reportedly opened fire in two mosques in Christchurch, New Zealand. The attack reportedly left at least 49 people dead. In the aftermath, world leaders, civilians, and communities around the world are grieving and sharing their horror. On that list of those appalled to hear the news is President Barack Obama, whose tweet about the Christchurch mosque shootings shares his grief, his condolences, and his call to action.

The attacks took place at Al Noor Mosque and Linwood Mosque, both in Christchurch, and were first reported around 1:40 p.m. local time, per The New York Times. The attacks came during the midday Friday prayer, when the mosques would be busy. At least 41 people were reportedly killed at Al Noor Mosque, and seven at Linwood Mosque, New Zealand Police Commissioner Mike Bush told the Times. At least 48 others, including children, are reportedly being treated for injuries. In the aftermath, officials urged community members to stay indoors and avoid attending mosques anywhere in New Zealand on Friday, with Bush asking mosques to "close [their] doors" until they hear from authorities.

In a press conference, New Zealand Prime Minister Jacinda Ardern called the attack "an extraordinary and unprecedented act of violence," and reaffirmed that New Zealand stood with its Muslim community, noting that it was possible that those killed included migrants and even refugees. "They have chosen to make New Zealand their home and it is their home," she said. "They are us."

Around the world, many others joined Ardern in supporting both New Zealand and the Muslim community, internationally as well as within the country. In his tweet, the former U.S. president affirmed his support, sending his "condolences" and calling on the world to "stand against hatred in all its forms." He wrote in full,

Michelle and I send our condolences to the people of New Zealand. We grieve with you and the Muslim community. All of us must stand against hatred in all its forms.

His message was echoed by other American politicians, including President Donald Trump and Speaker of the House Nancy Pelosi, who shared their own heartbreak in response to the attack, with many speaking out to condemn Islamophobia or to pledge support to New Zealand.

International leaders weighed in as well.

Following the shooting, authorities said they had suspects in custody, and that one man had been charged with murder, per CNN.

The incident is the first mass shooting in New Zealand in almost 30 years. The last major incident, per the Times, was in 1990, when a man shot 13 people, including two young children, as a result of a dispute with a neighbor. The publication notes that violence, and particularly gun violence, is rare in the country of some 5 million people, and there have been less than a dozen gun murders in the country each year since 2007.

Rare or common, and no matter the cause, this kind of act of mass violence is always horrifying. If you want to help, here are a few things you can do.

More like this
The CDC's New Mask Guidance For Outdoors Means Shot Girl Summer Is On Its Way
By Rhyma Castillo
These Tweets About The Bidens' Photo With The Carters Ask A LOT Of Questions
By Rhyma Castillo
Biden's American Families Plan Includes Some Free College, Which, Wow
By Rhyma Castillo
Stay up to date