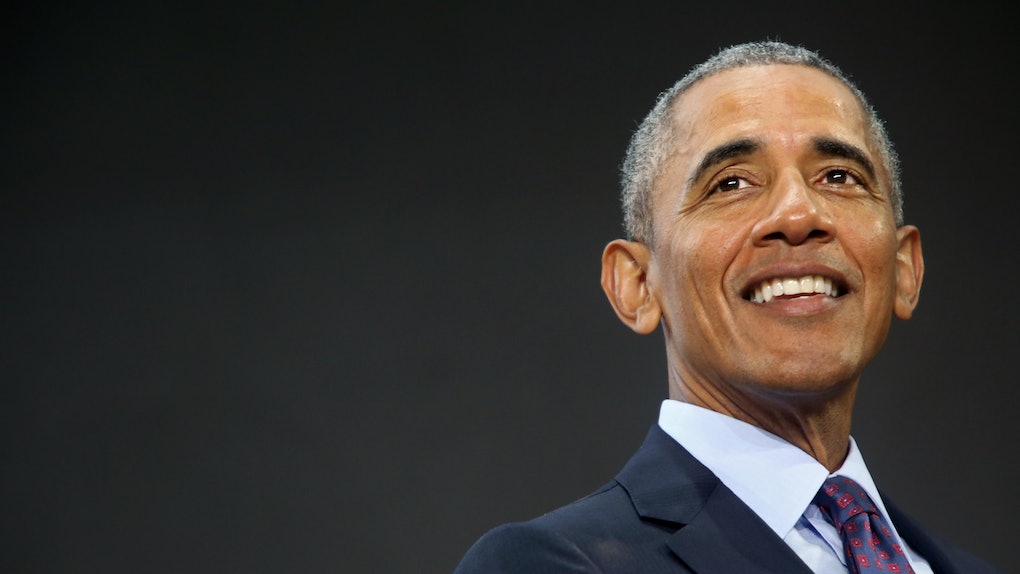 Not a day goes by without me longing for the good ole' days when Barack Obama was president. On Memorial Day, we thank and honor those who bravely fought for our freedom, and Barack Obama's Memorial Day message does exactly that. I don't know about y'all, but I wish it was 2012 again.

May 28 marks Memorial Day, and everyone around the country has a lot to thank these soldiers for. So, Barack Obama tweeted an inspiring post about the special day, and it's truly beautiful.

We can never truly repay the debt we owe our fallen heroes. But we can remember them, honor their sacrifice, and affirm in our own lives those enduring ideals of justice, equality, and opportunity for which generations of Americans have given that last full measure of devotion.

Well said, Obama. It's no secret that the former POTUS always knows the right thing to say, and Memorial Day is no exception. While Obama's message may have received applause from the public, Donald Trump's Memorial's Day message sparked quite a different reaction. Why were people so upset by the current president's tweet? A lot of it has to do with the fact while tweeting about the holiday, he turned it around to boast about his "achievements" while in office. News flash, not everything is about you Trump.

Talk about a beautiful sentiment. Following Obama's post, Twitter tearfully reminisced on the years when he was in the Oval Office, and shared their nostalgia on social media.

It's a well known fact that Barack Obama is arguably the coolest and most popular president of our lifetime, especially among younger generations. Donald Trump on the other hand, not so much. In January, the Gallup poll shared that Trump's first year in office had the worst approval rating by 10 points compared to any other president. Trump's 38.4 percent approval rating is quite a different story than Obama's, who held a 57.2 percent approval rating during his first in the White House. Plus, the current president is perhaps the most controversial figure on Twitter, and his May 28 tweet "honoring" Memorial Day certainly didn't help his popularity.

Happy Memorial Day! Those who died for our great country would be very happy and proud at how well our country is doing today. Best economy in decades, lowest unemployment numbers for Blacks and Hispanics EVER (& women in 18years), rebuilding our Military and so much more. Nice!

Cue eye roll here. There's so many faux pas in this tweet, but I don't have have a full 24 hours to list them all. Leave it to Trump to make a day intended to honor others all about himself. I'm not trying to discredit his achievements, but perhaps today isn't the day to gloat. Plus, adding an exclamatory "Nice" definitely isn't typically seen in tribute posts. I, along with the rest of the Internet, am really cringing right now. However, rest assured, Twitter has a lot to say about Trump's tweet and some major shade is being thrown right now.

To quote Trump: Nice! I love when the Internet comes for the president, and now that Trump can't block Twitter users anymore, I foresee many more subtle jabs such as these in the future.

I have to admit, I agree with the public on this one. I miss watching Barack Obama on screen delivering speeches and addresses. After all, he is one of the most iconic public speakers in history. Only he could deliver a Memorial Day message that's powerful and sincere at the same time. He really never ceases to amaze me.

Setting this presidential competition aside, let's not forget this day is meant to honor the brave individuals who have, and still, fight for our right to be free.

On behalf of everyone, thank you.

More like this
These Tweets About The Bidens' Photo With The Carters Ask A LOT Of Questions
By Rhyma Castillo
Biden's American Families Plan Includes Some Free College, Which, Wow
By Rhyma Castillo
The Tweets & Memes Of Doug Emhoff Waving To Kamala Harris Hype The Supportive Spouse
By Cianna Garrison
Stay up to date