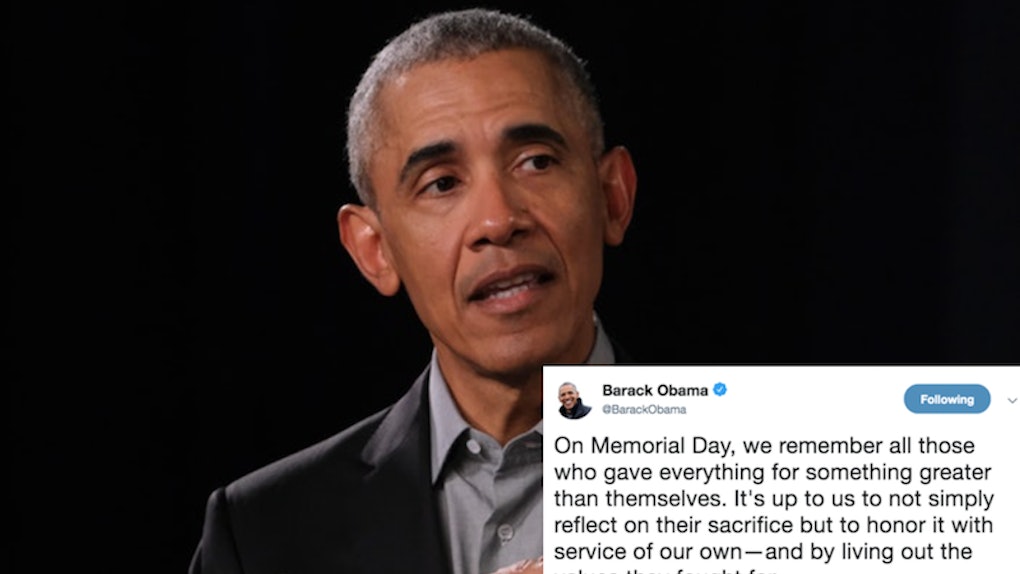 Like always, Memorial Day 2019 inspired U.S. residents to honor late military members with monuments, parades, and posts. That includes former president of the United States, Barack Obama, who used Twitter to show his support. Like other notable political figures, Obama tweeted about the holiday and talked about its undeniable importance. TBH, Barack Obama's Memorial Day 2019 tweet is so emotional that it might make you tear up. Not only does it shed light on the true meaning of Memorial Day, but it also urges people to embody the values that fallen soldiers fought for.

Obama's tweet from Monday, May 27 was published around noon eastern time and features a photo of himself in Arlington National Cemetery. In the tweet, he wrote, "On Memorial Day, we remember all those who gave everything for something greater than themselves. It's up to us to not simply reflect on their sacrifice but to honor it with service of our own—and by living out the values they fought for."

See? It's an emotional tweet that stretches far beyond the meaning of the holiday. Of course, it advises people to honor the soldiers who've sacrificed their lives in the military, but it also talks about the importance of "living out the values" that were earned by them.

As you could imagine, tons of Obama's followers responded to his Memorial Day tweet with words of appreciation. However, he isn't the only political figure that has posted about the holiday. In fact, on May 27, Joe Biden shared words of his own that honor soldiers who've made the "ultimate sacrifice."

In a tweet, Biden wrote, "Every #MemorialDay, Jill and I remember those who made the ultimate sacrifice in service of our nation. Our troops are the heart, soul, & spine of America—may we never fail to honor the memory of those who have fallen and ensure their spirit lives on in both our words and deeds."

On April 25, Biden announced that he'll be running for president in 2020 with a video suggesting that the country is "in the battle for the soul of this nation." Speaking of presidency, though, let's talk about Donald Trump's Memorial Day tweets.

Like other political figures — such as Obama and Biden — Trump took to Twitter on Monday, May 27, to share messages that honor the holiday. However, they were sprinkled between tweets about the Democrats in Congress and "fake news."

For example, one of Trump's first tweets on May 27 said that "the Dems are getting NOTHING done in Congress! They only want a Do-Over on Mueller!" That tweet, however, was followed by videos of the Arlington National Cemetery where Trump and his wife, Melania Trump, visited soldiers' gravestones.

Trump also tweeted a photo of himself and two members of the military along with the saying, "Land of the free because of the brave." He captioned the photo with the #MemorialDay hashtag.

With one look at Twitter, it's obvious that tons of people — politicians or not — are using the platform to honor Memorial Day. If you're looking for an outlet to show your support, go ahead and tweet.