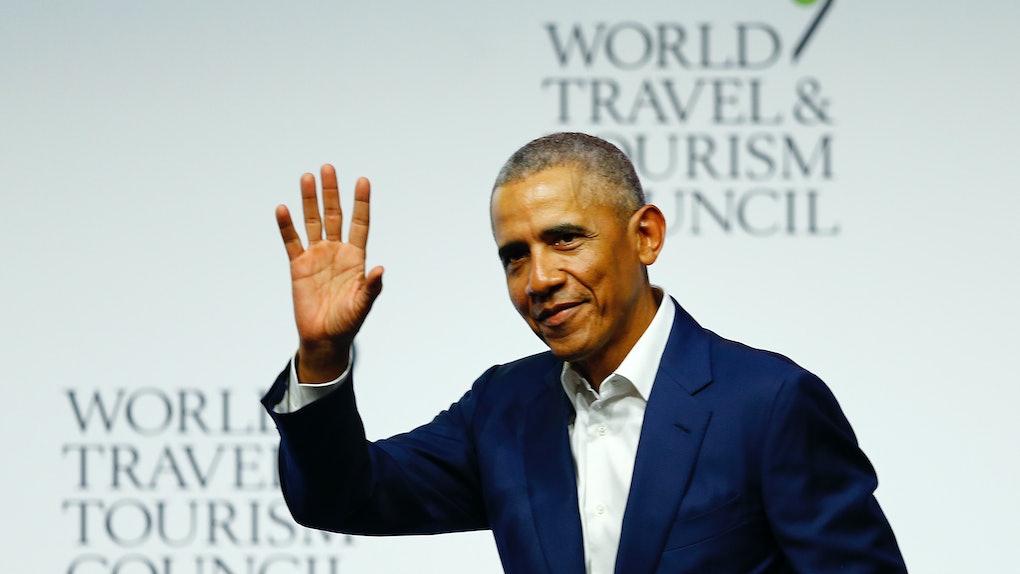 Just because school is back in session for some, and the weather is cooling down, doesn't mean that you can't still sit back and enjoy a good summer read. For fellow bookworms like me, there's nothing I love more than getting some book recommendations, and thankfully Barack Obama's 2019 summer book list is full of incredible titles and authors. Be right back, heading to the library.

On Wednesday, Aug. 14, President Barack Obama took to Instagram to share what he's been reading this year. Truth be told, it's an impressive list. His suggestions include the collected works of Toni Morrison; The Nickel Boys by Colson Whitehead; Exhalation by Ted Chiang; Wolf Hall by Hilary Mantel; Men Without Women by Haruki Murakami; American Spy by Lauren Wilkinson; The Shallows by Nicholas Carr; Lab Girl by Hope Jahren; Inland by Téa Obreht; How To Read The Air by Dinaw Mengetsu; and Maid by Stephanie Land. You catch all of that? Of course, there's usually a limit to how many books you can check out at the library, but don't stress about tackling them all at once. Titles and authors like these deserve to have your whole attention.

Obama's picks make sure there's something for everyone. From Wilkinson's thriller novel, to Jahren's science memoir, no one's favorite genre was left out of this list. In the Instagram post, Obama also gave a special shoutout to beloved author Toni Morrison, who died on Aug. 5. He recommended readers start with some of her most notable works such as Beloved, The Bluest Eye, and others. Obama wrote,

It's August, so I wanted to let you know about a few books I've been reading this summer, in case you're looking for some suggestions. To start, you can't go wrong by reading or re-reading the collected works of Toni Morrison. Beloved, Song of Solomon, The Bluest Eye, Sula, everything else — they're transcendent, all of them. You’ll be glad you read them. And while I’m at it, here are a few more titles you might want to explore.

Obama rereading Morrison may not be a coincidence, since the two shared a special bond. In April 2012, Obama awarded the Beloved author the Presidential Medal of Freedom, which is the highest award given to a civilian in the United States. Following her death on Aug. 5, Obama shared a photo of himself and Morrison in the White House via Instagram and Twitter, and penned a moving tribute in honor of the author and Pulitzer Prize winner. "What a gift to breathe the same air as her, if only for a while," he wrote on Twitter.

I don't know about y'all, but President Obama's yearly book list is something that I always look forward to. Does anyone think he'd be interested in starting a book club? Just throwing that out there.

Now that he's out of the White House, it's nice to see that the president is enjoying some much deserved rest, relaxation, and reading. Let's be honest, there's nothing better than kicking back with a good book, and clearly Obama agrees.

So, if you need me, I'll be printing out that list and heading over to my closest library. Except, what do I start with? There are too many good choices to choose from. Happy reading, everyone!

More like this
These Tweets & Memes About Matt Gaetz's Venmo All Make The Same Joke
By Cianna Garrison
The More Contagious B-117 COVID Variant Is Now The Most Common Strain In The U.S.
By Rhyma Castillo
Lenny & Larry's Summer Snackin' Sweepstakes Could Win You A Free Glamping Trip
By Daffany Chan
Stay up to date