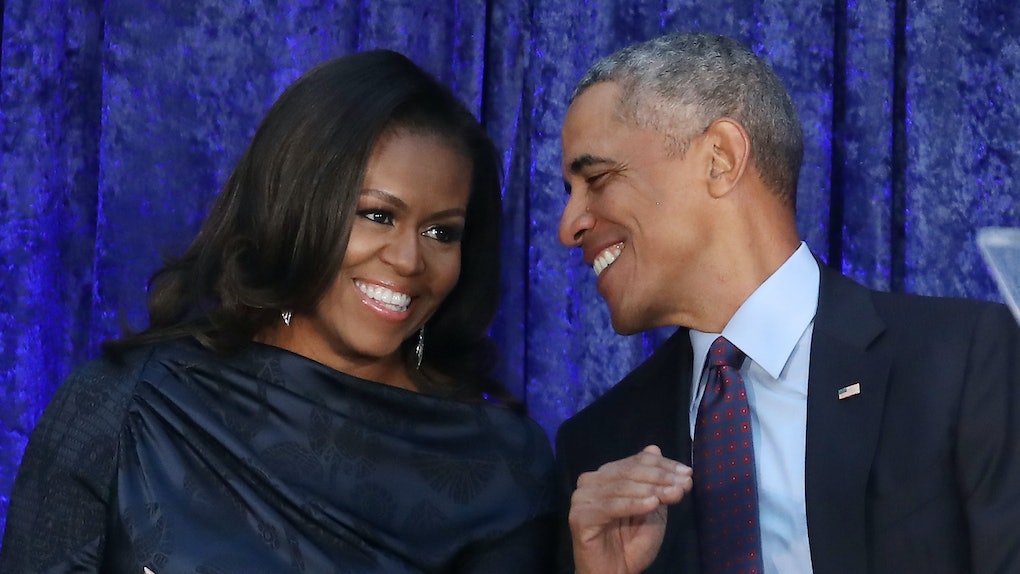 As the current administration falls deeper and deeper into scandal, many social media users are nostalgic about the past. Barack and Michelle Obama have been out of the White House for nearly three years now, but for many, they're still America's role models. And maybe, America's sweethearts, too? Oct. 3 marked 27 years of marriage for the former president and first lady, and it's some serious relationship goals — particularly since Barack Obama's Instagram post to Michelle on their anniversary had the sweetest reference. Step it up, everyone, because the Obamas just raised the bar.

On Oct. 3, 1992, the Obamas got married in Chicago, the city that launched both of their careers. Twenty-seven years later, Barack posted a photo of him and his wife looking off into the horizon. In his caption, he chose to reference the Beatles' 1967 song Getting Better to wish Michelle a happy anniversary. "Like the Beatles said: It’s getting better all the time," the former president wrote on Instagram. "Thanks, babe, for 27 amazing years!"

It's certainly not the first time that Barack has shared a loving message about Michelle on social media. Just last year, for the couple's 26th anniversary, the former president posted a photo of his wife gazing out of an airplane window, and described her as "an extraordinary partner, someone who can always make me laugh, and my favorite person to see the world with."

The sweet messages aren't restricted to Barack's Instagram, either. Michelle posted her own photo of her and her husband, in which they stood together on a porch by the beach.

"27 years ago, this guy promised me a life full of adventure," Michelle wrote in her caption. "I’d say he’s delivered. Here’s to our next chapter of becoming empty nesters and discovering what’s next — while still feeling the magic that brought us together all those years ago. Happy anniversary, Barack."

Is it too much to say again that these two are relationship goals? Almost three decades, two kids, two presidential terms, and a bookshelf's worth of bestsellers and they're still unbelievably adorable.

The Obamas may have left the White House in January 2017, but they have nonetheless kept themselves busy — and not just by posting cute shots of themselves to Instagram. Since the end of Barack's presidency, the couple has launched their own production company, Higher Ground, which already premiered its first Netflix film over the summer. Through Higher Ground, the Obamas have also struck an exclusive deal with Spotify to develop and produce podcasts.

That's not all they've accomplished, either. In November 2018, Michelle released her memoir, Becoming, and it was instantly successful. In fact, Elle reported earlier this year that it could ultimately be one of the best-selling memoirs of all time. The Obamas have also sent both of their children off to college since leaving the White House — Malia to Harvard University, and Sasha to the University of Michigan. And over the course of the past year, the Obamas' portraits at the National Portrait Gallery have attracted one million additional people to the gallery, per The Washington Post.

As is clear by now, the Obamas' departure from the White House did not mean a departure from public life. The pair continue to support each other through everything, just as they did back in the early 1990s, when Barack first proposed to Michelle. Barack was right — "it's getting better all the time," just like the Beatles said.

More like this
Barack & Michelle Obama's Statement On The Derek Chauvin Verdict Focuses On The Work Ahead
By Lara Walsh
After Derek Chauvin's Conviction, Young Black Activists Demand True Justice
By Nylah Burton
These Tweets About The Derek Chauvin Trial Verdict Are Full Of Shock
By Rhyma Castillo
Stay up to date