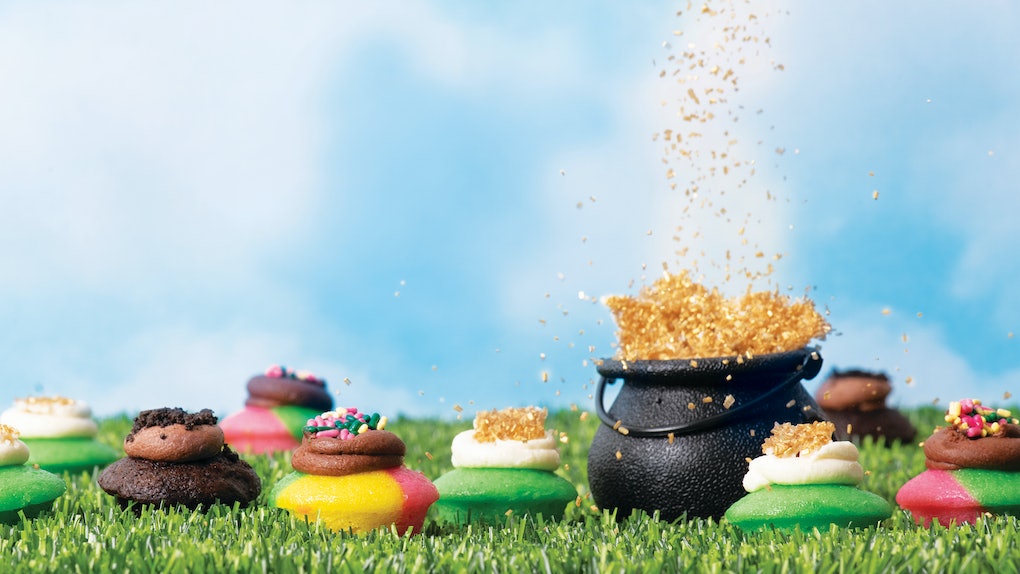 Courtesy of Baked By Melissa

Hold the Guinness, because your St. Patrick's Day festivities are about to take a turn for the sweet. Baked By Melissa, a New York City-based confectionary, is rolling out some festive goodies to help you get into the spirit of the holiday while channeling your inner leprechaun, and each option looks more mouthwatering than the next. Baked by Melissa’s St. Patrick’s Day treats for 2019 include limited-edition Lucky Charm and Pot O' Gold cupcakes for a sweet bite that'll definitely have you feeling lucky.

Until Sunday, March 17, cupcake lovers can take advantage of two delicious offerings that promise to imbue your tastebuds with the flavor of the holiday. As a chocolate lover, I was pretty pumped to hear about Baked by Melissa's new Lucky Charm cupcake, which is a shamrock-hued addition to the bakery's current menu. Unlike the name suggests, the Lucky Charm is not actually topped with Lucky Charms cereal. Instead, you're getting a green vanilla cupcake that's been stuffed with rich, chocolatey brownie batter then topped with sugar cookie icing. On the top, a dusting of glittering gold sugar brittle is the impossibly 'Gram-worthy icing on the (cup)cake.

It's basically one of the most on-theme St. Patty's Day confections I've seen yet, and unsurprisingly, it's incredibly photogenic. The sparkle gold sugar brittle makes the cupcake look just like a tasty pot of gold that I'd be totally happy to find at the end of any rainbow.

Speaking of rainbows, Baked by Melissa's second St. Patrick's Day cupcake is modeled on the colorful natural phenomenon. The Rainbow Cookie cupcake starts with a base of multi-hued almond cake, which is stuffed with strawberries and layered with creamy chocolate icing. Rainbow sprinkle brittle decorates the top.

TBH, I wouldn't be able to pick just one of these goodies to try, which is why the Manhattan-based confectionary is rolling out a couple different combinations to help you and your crew celebrate the right way.

If you have a big group, you can choose to get either 25 or 50 cupcakes for $28 or $56, which include the two new flavors along with a few rich Triple Chocolate Fudge cupcakes. Now, if you're really looking to get lucky and get into the spirit of things with the ultimate spread, Baked by Melissa is also offering a 100-cupcake Lucky Us package for $112. You know, just in case you need that in your life.

I'm definitely gravitating towards the Lucky Treat six-pack, which comes in a bundle of three for $24. While it's not as good of a deal as buying 25 or 50 of these cakes in one package, there's no denying that it's a lot more portable and convenient. When you're hopping from house party to house party, dropping off a six-pack of these goodies will definitely win you some brownie points. There are a few different combinations to choose from, so I'd look through and see which option works best for your situation.

Customers who want to ship their cupcakes anywhere nationwide have until Saturday, March 16 before these lucky treats are gone for good. If you happen to live in Manhattan, you can swing by Baked by Melissa until March 17 for free on-site pickup, making it the perfect stop for an afternoon pick-me-up during your St. Patty's Day bar crawl.

More like this
When Is Taco Bell's Quesalupa Leaving The 2021 Menu? It'll Be Gone Soon
By Daffany Chan
Hardee's & Carl's Jr.'s Hand-Breaded Chicken Sandwich Lineup Includes A Waffle Bun Option
By Daffany Chan
What Does Pepsi Blue Taste Like? It Has Familiar Fruity Flavors
By Cianna Garrison
Stay up to date