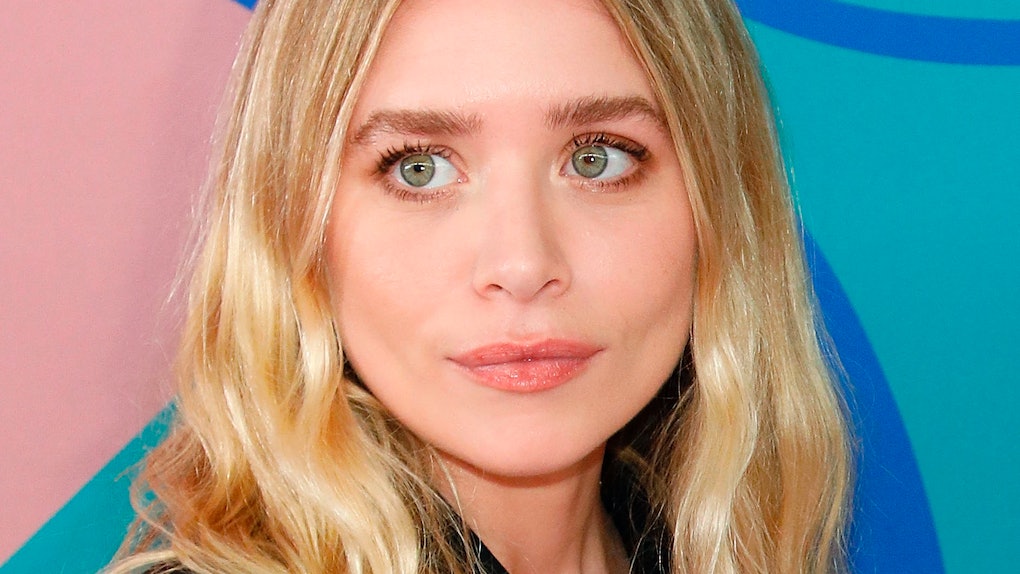 Ashley Olsen's Relationship History Is Private, But Here's The Scoop

From athletes to artists to CEOs, Ashley Olsen's relationship history is definitely eclectic. Though she's had several rumored relationships over the years with a totally random assortment of suitors, the child star-turned-fashion mogul values her privacy, so you'll rarely hear her talk about her love life. Few people even realize Olsen is currently dating artist Louis Eisner, whom she's reportedly been with since 2017. (Elite Daily previously reached out to Olsen's rep for comment on the relationship but didn't hear back in time for publication.)

In Feb. 2019, an insider told Radar that Eisner likes his privacy, which is why he and Olsen keep their romance under wraps. "It's not that they are trying to keep their relationship on the down low," the source claimed. "Louis just doesn't like the spotlight — even less so than Ashley." Sounds to me like these two are meant to be.

Before hooking up with Eisner, Olsen engaged in a series of little-known romances, some of which lasted for a matter of months and others for a couple of years. Since Olsen doesn't do social media and rarely gives interviews, her personal life is largely a mystery, but here's what I do know about the designer's reported dating history. (Elite Daily reached out to reps for Olsen and her reported exes for comment, but did not hear back in time for publication.)

Olsen began dating former Columbia University QB Matt Kaplan (who went on to become the CEO of Ace Entertainment) sometime in 2001, when she was still in high school. Mary-Kate Olsen later told Rolling Stone she was the one to introduce Kaplan to her sister. In May 2004, People reported the couple's breakup after nearly three years of dating. According to Olsen's rep, the split was "amicable" and the two "parted on good terms."

Olsen's next relationship was reportedly with New York City nightclub owner Scott Sartiano, whom she began dating soon after starting her freshman year at NYU. The relationship made headlines in Feb. 2005, when Olsen sued the National Enquirer for $40 million over a story claiming she was "caught in a drug scandal" because of Sartiano's "alleged drug dealing." Three months later, Olsen and Sartiano reportedly split after less than a year of dating, with an insider for Star claiming Olsen was fed up with Sartiano's hard-partying lifestyle.

After breaking up with Sartiano, Olsen was spotted out and about with actor and Thirty Seconds to Mars singer Jared Leto in July 2005, with a source telling Us Weekly that Olsen was "like a giddy schoolgirl who has a new man" around Leto. However, little more was heard about the maybe-couple until Jan. 2008, when Leto and Olsen were reportedly seen "making out" at the Art of Elysium Gala. Then, four years after that, the two reportedly had an intimate dinner date at the Polo Lounge in Beverly Hills. Neither Olsen nor Leto has ever commented on their rumored on-and-off-again relationship.

In Sept. 2005, Olsen reportedly started seeing Tsubi Jeans CEO Greg Chait, though it's unclear how they met. In Jan. 2007, Page Six reported the pair's split, with a source citing "commitment issues" as the reason for their breakup. The source added, "When they were together over the holidays, she told him she was looking for something more permanent. He wasn't ready for that. So they decided on an amicable parting."

In Oct. 2007, Olsen was reportedly spotted getting cozy at the Rose Bar inside New York City's Gramercy Park Hotel with professional cyclist Lance Armstrong. "They came together with a group of friends," an insider for the NY Post claimed. "Ashley drank red wine, sat on his lap and they were making out all night. They left together around 2 a.m."

At the time, a rep for Olsen declined to comment on the maybe-relationship, and the romance rumors died down after a few months. However, in 2014, Juliet Macur's tell-all biography on Armstrong, Cycle Of Lies, claimed the athlete was "warned" by John Korioth, head of the Livestrong Foundation, that the relationship would damage this reputation and he should "put a stop" to it.

Olsen's relationship with actor Justin Bartha was perhaps her most public to date. The two began dating sometime in 2008, and in Oct. 2008, the couple sparked engagement rumors, though a rep for Olsen shut those rumors down. "Contrary to several tabloid reports, Ashley Olsen is not engaged to be married," the rep said in a statement to People. "Ashley is dating Justin Bartha and they are very happy."

During an Aug. 2009 interview with Marie Claire, Olsen referred to relationship with Bartha as "more important than anything else in the world," but sadly, she and Bartha decided to split in March 2011. Luckily, it doesn't seem there's any bad blood. Six years after their breakup during an appearance on Larry King Now, Bartha referred to Olsen as "a brilliant, talented woman," and said they had "a great relationship."

Two-and-a-half years after her breakup with Bartha, Olsen was romantically linked to Oliver Peoples CEO David Schulte. "Ashley is dating David," an insider reportedly confirmed to Us Weekly in Oct. 2013. "It's pretty new." Four months later, Us Weekly announced the couple's split. "He was a great guy and cute, but it didn't work out," a source for the magazine claimed.

A little less than three years later, the Olsen twins decided to name Schulte as president of The Row, their fashion brand, but Schulte and Olsen's working relationship also soured. In Oct. 2019, Schulte abruptly stepped down from his position and later filed a lawsuit, though the nature of his case still isn't clear.

Soon after her breakup with Schulte, Olsen stared seeing director Bennett Miller. "They were introduced and have started dating," a source reportedly told Us Weekly in Feb. 2014. The maybe-couple kept such a low profile together (save for a few rare sightings) that it's not even clear when exactly they split, though reportedly, they decided to end their two-relationship in early 2016.

In June 2016, Page Six reported what appeared to be a date between Olsen and renowned artist George Condo at New York City's Mercer Hotel. "It looked romantic," a source for Page Six claimed, though a rep for Olsen later insisted the two were having "a business meeting," not a date. After a few more sightings, the dating rumors fizzled out by the end of the summer.

Financier Richard Sachs came on the scene in Oct. 2016, and in Nov. 2016, he and Olsen took their relationship public by smooching at a Knicks game while on a double date with Olsen's sister and her husband, Olivier Sarkozy. "Richard had his arms all over Ashley, kissing and [stroking] her hair. She was laughing and giggling," an onlooker reportedly told Us Weekly. After just about six months together, the couple reportedly decided to go their separate ways so Olsen could "focus on her clothing line," as a source told Us Weekly. "They're still friends and hang out," the source added.

According to Grazia, Olsen and artist Louis Eisner were first spotted together in Oct. 2017 at Hammer Museum’s Gala in the Garden in Los Angeles. An insider reportedly told Radar that the pair met through mutual high school friends and were close for years before they started dating. In July 2019, Olsen raised eyebrows when she was spotted wearing a simple black band on that finger, though rumors of an engagement were never confirmed. As a source reportedly told Radar, while Olsen and Eisner are "very much in love," they aren't in a rush to walk down the aisle. "He's a long-term relationship kind of guy, but he doesn't follow societal norms," the source said of Eisner.

Here's hoping these two keep on doing things on their own terms and making each other happy.