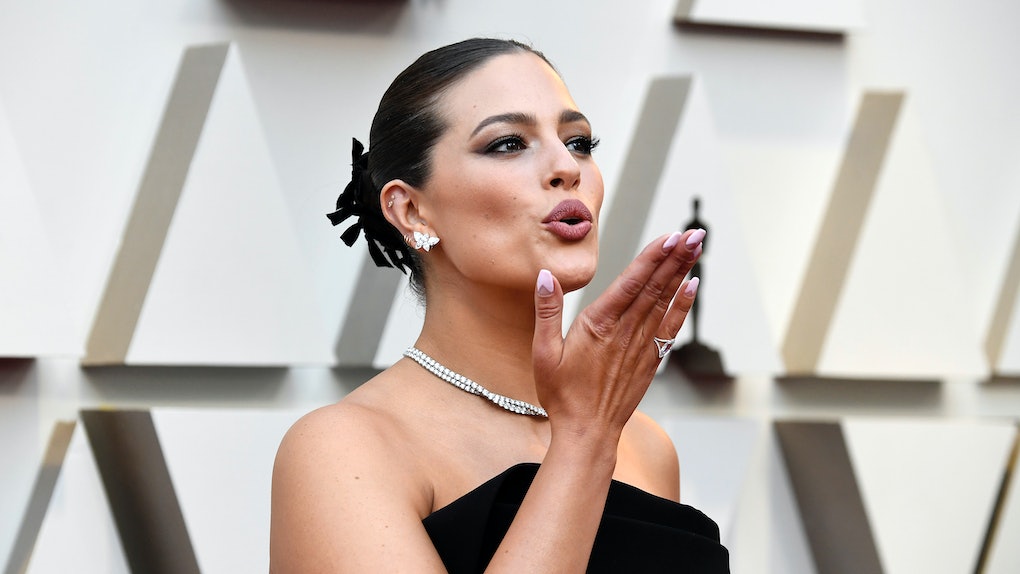 Ashley Graham's Quotes About Body Positivity Always Keep It Real, No Matter What

If you casually scrolled through Ashley Graham's Instagram account, you'd probably think, "Wow, this woman is a stunning model." While every photo she uploads is absolute fire (at least in my opinion), she's also using her social media platforms to share so much more than just her modeling work. From promoting size inclusivity in the modeling industry to sharing tips for learning to accept and love whatever body you've got, she's become a positive role model who doesn't put up with trolls. Ashley Graham's quotes about body positivity aren't just empowering; the 31-year-old has proven time and again that she always knows how to keep it real, especially when it comes to conversations about body acceptance and self-love.

Graham has no qualms about calling out anyone who tries to body-shame her, but she's also been open about the fact that getting to such a comfortable place with herself has been a long journey. "We've been taught to say negative things to ourselves — to pinch our fat and be like, 'One day it'll leave,'" she said in an interview for SELF's October 2016 issue. "So I decided to break that cycle. But it didn't happen overnight." As Graham's career began to really take off, she learned to find confidence in her body. "And nobody — nobody — has control over my body but me," she said.

Here are a few more of the incredible body-positive messages Graham has shared over the course of her career.

"I workout to: stay healthy, feel good, get rid of jet lag, clear my head, show big girls we can move like the rest of em, stay flexible & strong, have more energy," she wrote in the caption of an Instagram post back in October 2017. "I don’t workout to loose weight or my curves, bc I love the skin I’m in.”

It's impossible to control what other people might say about you or your body, but from Graham's perspective, being conscious of how you talk to yourself is a much bigger, more important part of learning to love yourself. "Words were breaking me for a long time. I would call myself fat and ugly and disgusting," she told PEOPLE in 2016. "The moment that I realized, that’s not the kind of life that I want, my life changed. My career took off."

On Not Caring About Someone Else's Comfort

Consider this a universally applicable reminder from Ashley Graham: It's not your job to make other people feel comfortable, especially as it relates to your own body.

"Someone once told me my thighs were 'cellulite city'. But I now realize these thighs tell a story of victory and courage," Graham wrote in the caption to a 2016 Instagram post. "I will not let others dictate what they think my body should look like for their own comfort, and neither should you."

On The Impossibility Of A "Perfect" Body

Standards of beauty vary from culture to culture, country to country, and even person to person. In other words, it's quite literally impossible to achieve the "ideal" body type because, well, what does "ideal" even mean?

On Affirming Her Body

When Graham was honored at the Urban Arts Partnership 25th Anniversary Benefit, she talked about the importance of speaking positive affirmations to yourself in front of the mirror on a daily basis. “Mine are simple. [I say] ‘You are bold. You are brilliant and you are beautiful,'" she said, per PEOPLE. "And then if my lower pooch is really puffing out that day, I say ‘Lower pooch you are cute’. And we have a moment."

On How Every Woman Is A Real Woman

"Real women have curves" became a pretty popular phrase when the body positive movement first started to gain momentum. But to Graham, this kind of statement promotes division, rather than community, among people who identify as women.

“We are all real women," she wrote in an Instagram Story back in March of 2018, per Teen Vogue. "I can’t stand it when I read comments that say, ‘Finally, a real woman.’ No matter your size/shape/amount of cellulite, we are in this together.”

Every body in a bikini is a bikini body, according to Graham. "The worst question I get asked all the time is, 'How did you find the confidence to get into that bikini and get photographed and not get your cellulite retouched?'" the model explained to the fashion site The Daily Front Row. "And it’s like, well, honestly, I just got into the bikini, I went to the beach, and then I got over it."

Some fashion rules are pretty harmless, like "don't wear white after Labor Day." But some arbitrary rules claim that certain body types shouldn't wear specific clothing styles. According to Graham, this is total BS.

"You know, if I were to listen to all the regulations, like, 'you can't have this, or you to have that before you wear this,'" she said in a W Magazine interview, "I think that I would just have to walk around naked my whole life." Instead, she explained, "The moment you stop putting regulations on your life, and accept what you actually have for your body, then that’s when it all changes."

On Being Patient With Yourself

Realistically speaking, you are probably not going to be 100 percent happy with your body 100 percent of the time, but that's OK. Instead of becoming frustrated with yourself if you're having an off day, recognize that it's part of the journey. “This confidence is not something that happens overnight," Graham told Page Six. "I have been working on it for a long time.”