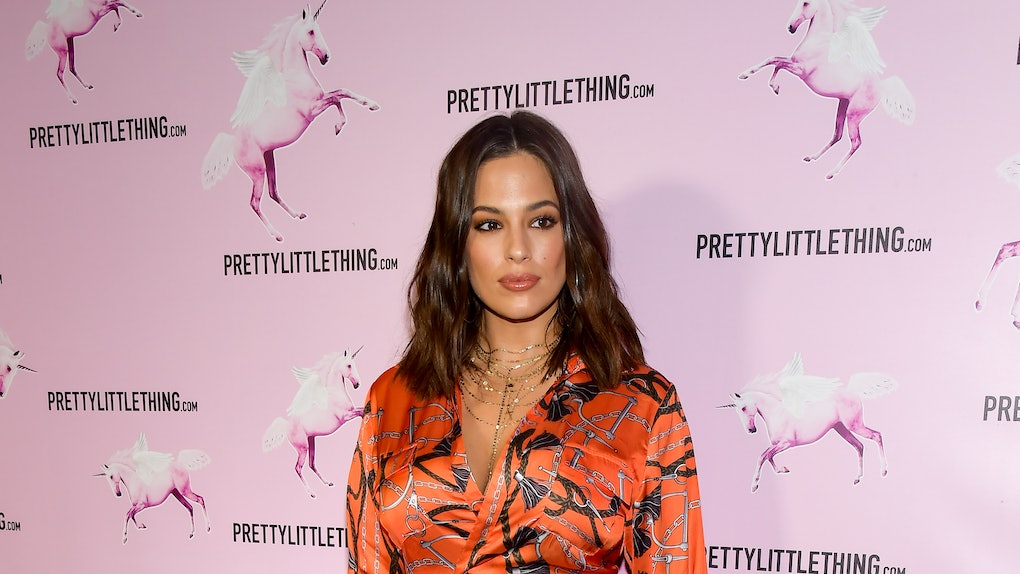 Working out with a best friend, partner, or even a personal trainer gives new meaning to the phrase “buddy system.” For me, prior to getting married and moving upstate, I could call my BFF on any given Saturday morning, and know that she’d motivate me to get out of bed and meet her at the gym. So when Ashley Graham posted a buddy workout with Kira Stokes on Instagram in honor of National Workout Buddy Day, all the feels of what it's like to have someone there to get up and get moving with you came rushing back to me. Fitness is just more fun when you tackle it with a friend, but, for the record, it’s not necessarily easier, as you can tell from Graham’s exhausted groans in the video.

For those who don't know, Women’s Health launched National Workout Buddy Day back in March of 2018, and was celebrated on March 1, 2019 for its second consecutive year across social media. Graham took to Instagram to give fans a behind-the-scenes peek at the types of workouts she does with her workout buddy, aka celebrity trainer Kira Stokes, and the three-exercise sequence that the pair performed together looked like an absolute blast. Not to mention, quite the sweat sesh.

“I don’t work out to lose weight, I don’t work out because I want to be thin, I work out to stay healthy, strong, firm and to keep my mind clear,” the fashion model captioned the clip, the thumbnail of which captures a triumphant Graham straight flexing.

I dare you to watch Graham and Stokes smash out the first of the three exercises — which looks to be a hop into a burpee, into a push back push-up, and back up to a hop — and not stare, mouth agape, in amazement. Talk about team cardi-no; I’m out of breath just typing out the details. The pair then moved on to medicine ball throws whilst running up and down the gym, and they finished off in high planks, while simultaneously rolling a medicine ball back and forth to one another. It just goes to show you don’t need to have 12 different exercises lined up per session to work up a sweat. Graham seemed pretty spent by the time Stokes was through with her.

Now, granted, if you’re the type of person who prefers to exercise solo because you can get through the workout more quickly that way, and you don’t have to depend on someone to be at the gym at a certain time, that’s your prerogative, and I can totally see where you’re coming from. However, there are so many benefits to working out with someone that, if you have the time (and patience) to spare, you might want to give it a shot.

Aside from having someone to hold you accountable (which, to me, is pretty much everything), Stephanie Blozy, owner of Fleet Feet of West Hartford and holder of an MA in exercise science, says working out with a buddy adds a social aspect to exercising that isn’t necessarily distracting, but rather, uplifting. “Casual conversations between reps or while running make the time fly and lighten the mood,” she tells Elite Daily. “When the workout gets too intense for conversation, all it takes is a knowing glance from your partner [drenched] in sweat to let you know that you're in this together.”

What’s more, when you’re working out with someone, their progress can motivate you to work harder and meet similar goals, if for no other reason than their example made you realize it’s possible. “A little friendly competition raises the bar and shows you that impossible is actually possible,” Blozy explains. So when your friend places in a 5K, meets a PR on the benchpress, or does their first pull-up, Blozy says just watching these little victories unfold before you can remove the intimidation factor, and instill a belief in you to accomplish your goals, too.

Keep in mind, though, that as great as workout buddies are, you don’t have to be paired off to get an awesome workout in. If you're looking to boost your motivation sans gym buddy, consider something like creating an inspiration board that encourages you to meet your goals, or setting alarms on your phone for when you’re due at the gym (pro tip: add a little inspirational quote to your alarm that builds you up). Also, just because you aren’t working out together, that doesn’t mean you can’t still recruit a co-worker or BFF to be your driving force. Having them text you words of encouragement, or even just a funny meme to lighten the mood of your sweat sesh, can do the trick.

Granted, there are a handful of buddy workouts that require two people to get 'em done. However, Graham and Stokes’ sequence isn't one of them. For example, their combination burpee move is a solo project to begin with, so that’s a non-issue. To modify medicine ball throws, you can perform them standing still, and gently toss the ball against a wall, or swap out for medicine ball squats, instead. To complete this sequence, drop into a high plank position and simply tap the medicine ball with you palms, or roll the ball from one palm to the other.

So, whether you're sweating solo or smashing PRs with a friend, the best workout, Stokes said in her own Instagram video caption, is one "where you walk away feeling stronger and more stoked than when you began."