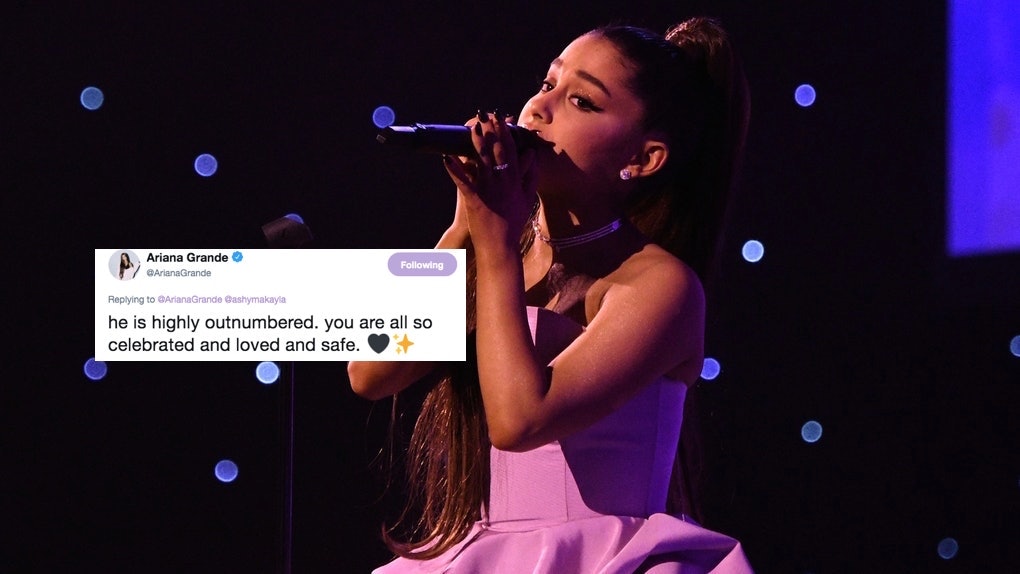 Ariana Grande has no time for homophobia. The "Thank U, Next" singer is currently on her Sweetener/Thank U Next tour, and at a recent stop, there was a homophobic protestor camped outside the arena trying to preach their agenda to the crowd exiting and entering the venue. The man had a microphone, speaker, and an anti-pride sign and was clearly trying to stir up some controversy, but Ariana Grande's tweets about a homophobic protestor at her show make clear her feelings on the guy's presence and message.

The protestor showed up at Grande's concert on Saturday, June 8. A fan tweeted a video of the protestor in an exchange with concertgoers the same night, saying, "f*ck these dudes outside the Ariana Grande concert spreading homophobia and being f*cking stupid and it took EVERYTHING in me not to kick him in the balls with me heels on."

Grande took to Twitter to respond to the tweet on Sunday, June 9, in a series of tweets.

"Man... saddened but not surprised by this one bit," Grande said in her first tweet. "I’m so sorry any of my fans had to encounter this. We will do our best to ensure this doesn’t happen again. Proud of u all for not fighting / engaging violently. Never worth it. Wishing him peace & a healed heart cause girl yikes."

In the video, the protestor and the Grande fans debate over religion, because, of course, that's what this guy was talking about.

Grande sent more support to her LGBTQ+ fans in two more tweets, trying to ensure them that they have support from her.

"He is highly outnumbered. You are all so celebrated and loved and safe," she said in a follow-up tweet.

"Also, he was doing the be alright choreo in his garage later that night, I promise," she said in one last tweet.

The "NASA" singer isn't paying the homophobic protestor anymore mind, though. She announced on Twitter the same night that she is adding more U.S. tour dates (although the two things don't seem to be connected).

"Adding some more U.S. dates for u," Grande tweeted. "Truly excited and exceedingly grateful. Thank u for making this such a beautiful thing more info soon."

"Thanks for coming to these shows and giving us all your divine energy we love u sm," she said in another tweet. "Also more shows = more opportunities to try different songs under the moon ! U know i been thinkin," she added.

Grande has a huge fanbase in the queer community, and she's always made it clear they have her full support (the finale of Grande's Coachella 2019 sets featured a giant rainbow being painted across the screens), so these tweets come as no surprise.

Grande's brother, Frankie Grande, commended his sister for the show of support for queer people at Coachella on his Instagram. He posted a photo of him kissing his boyfriend in front of the rainbow on Grande's stage and said,

Sharing this 💋 with my boyfriend at #coachella after my sisters triumphant set under the #lgbt flag is a moment i will cherish forever...

The Grandes have no time for your homophobia! Thank u, next.