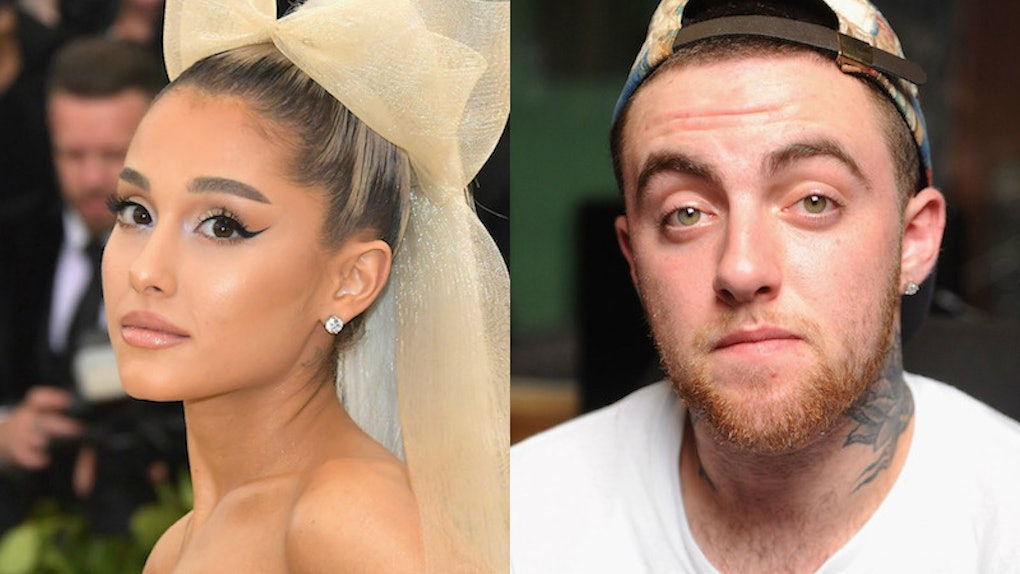 No one should ever doubt Ariana Grande's grief over the death of Mac Miller. The singer and rapper dated for two years before breaking up earlier this year, but she made it clear after their breakup that she still has a lot of love for him. Her first Instagram in honor of Miller posted on Sept. 8, the day following his death on Sept. 7, showed her grief over her ex's reported overdose. In the days since, she has posted more tributes. Ariana Grande's tribute to Mac Miller on Instagram that she posted over the weekend shows she's doing what a lot of fans are doing in light of his death: listening to his music.

Grande posted two screenshots of her listening to Miller's music to her Instagram story on Sept. 15. She was listening to "Dunno" and "Ladders" from his last album Swimming, which was released on Aug. 3, 2018. The album is largely about heartbreak and his experience dealing with issues concerning his mental health and addiction, and it's safe to assume the heartbreak he sings about on the album is about Grande. But he also makes it clear throughout the songs that she wasn't to blame for his issues, like so many people online are accusing. Ever since his death, there have been people blaming Grande for his overdose, which is extremely harmful and unfair to Grande (she disabled her Instagram comments, seemingly as a result of the hurtful blame).

Now Grande has posted several tributes to her ex. The posts have been moving and heartfelt, and I can't help but feel for Grande as she posts these photos and videos. They certainly show how much she truly cared for Mac Miller. Not that she has to go out of her way to prove something like that.

Grande's latest tribute to Mac Miller was posted to her Instagram story on Sept. 15. She's listening to his music to help her get through.

She posted screenshots of her listening to "Dunno" and "Ladders" from Swimming accompanied with some sweet GIFs to show her love for the songs.

When news of Mac Miller's death first broke, she posted a photo of Miller sitting at her feet looking up at her. Then she posted a video from when they were together.

i adored you from the day i met you when i was nineteen and i always will. i can’t believe you aren’t here anymore. i really can’t wrap my head around it. we talked about this. so many times. i’m so mad, i’m so sad i don’t know what to do. you were my dearest friend. for so long. above anything else. i’m so sorry i couldn’t fix or take your pain away. i really wanted to. the kindest, sweetest soul with demons he never deserved. i hope you’re okay now. rest.

On Sunday, Sept. 16, she posted a selfie to Instagram of her looking up to the sky, and it looks like she's in tears.

It looks like Ariana Grande will always have a deep love and respect for Mac Miller.