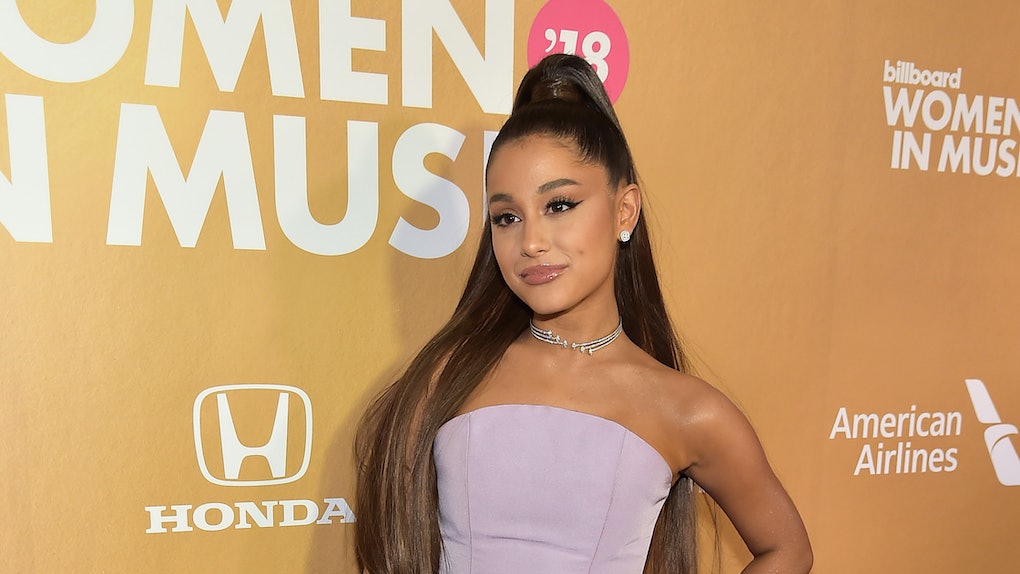 It’s no secret that 2018 hasn’t exactly been kind to Ariana Grande. The 25-year-old singer has seen her fair share of heartbreak this year and she’s shared a lot of it with her fans on Instagram. Actually, Ariana Grande's 2018 best nine on Instagram really highlights all the things she’s been through this year.

As you might expect, some of Grande’s posts are all about her ex Mac Miller, who passed away at age 26 in September 2018. The first two posts in her best nine reflect her relationship with Miller, which is beautifully fitting given how much love and respect she still has for him.

The first post is a simple black and white photo of Miller that really needs no caption. The second one, however, is a video that shows Miller and Grande at the height of their love. And Grande captioned the video accordingly.

“I adored you from the day i met you when i was nineteen and i always will,” she wrote. “i can’t believe you aren’t here anymore. i really can’t wrap my head around it. we talked about this. so many times. i’m so mad, i’m so sad i don’t know what to do. you were my dearest friend. for so long. above anything else. i’m so sorry i couldn’t fix or take your pain away. i really wanted to. the kindest, sweetest soul with demons he never deserved. i hope you’re okay now. Rest.”

Take a look at Grande’s video down below:

After Miller’s death, Grande essentially threw herself into her music and created a now-iconic song called "Thank U, Next." The hype for the song and its accompanying video was pretty wild, and the rest of Grande’s best nine definitely reflects that. Several of her best nine posts are all about “Thank U, Next” and for good reason — the song is a direct response to the challenging year the singer has had in love.

After splitting from Miller in May 2018, Grande dove head and heart first into a relationship with Pete Davidson that seemed really promising. But when that relationship fizzled, Grande decided to make time to heal herself, as outlined in the lyrics for “Thank U, Next”:

Spend more time with my friends / I ain't worried 'bout nothin' / Plus, I met someone else / We havin' better discussions / I know they say I move on too fast / But this one gon' last / Cause her name is Ari / And I'm so good with that (so good with that)

So, with all that said, it makes sense that “Thank U, Next” fills out the rest of Grande’s best nine for 2018. Here’s a look at some of the posts that made it to the list.

First, there’s the pic of Grande giving fans a look at her love for Mean Girls:

A tribute to “The Plastics” featuring all of Grande’s closest pals:

A lovely screenshot from the “Thank U, Next” video:

Clearly, Grande created a moment with her video for "Thank U, Next." And that just goes to show that no matter the obstacles in her way, she'll come back stronger every time!

More like this
These Tweets Comparing Billie Eilish's 'Happier Than Ever' & Ariana Grande's 'Sweetener' Covers Are A Lot
By Sydney N. Sweeney
These Tweets About The Weeknd & Ariana Grande's "Save Your Tears" Remix Are All About Their Fire Vocals
By Sydney N. Sweeney
BTS' "Butter" Concept Photos Have ARMYS Searching For Clues
By Michele Mendez and Cianna Garrison
Stay up to date