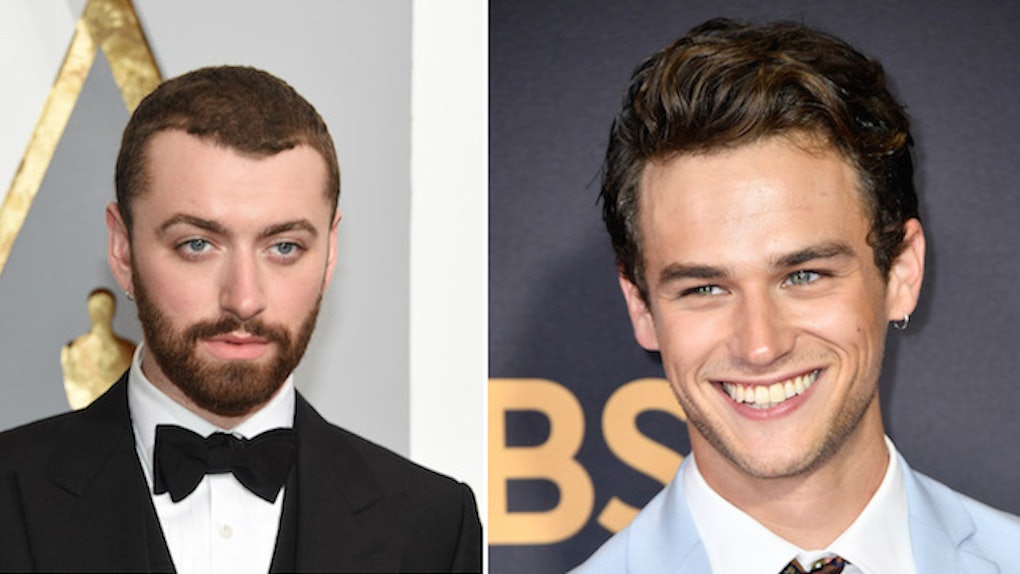 Excuse me, yes, hello. I have news, and it's not what you think I'm going to say. You probably think I'm here to talk about Sam Smith kissing Brandon Flynn, and while yes I will get to that, it's not my first order of business. You probably also think I'm here to lay down how incredibly awesome it is that these two may have found love in each other, or to theorize about what the tension feels like in the room when they lock mysterious, twinkly eyes. And sure, sure... we'll talk about it and how much we love it etc., etc... but, it's not my priority. Before we go anywhere near that stuff, my absolute first order of business is to drop this insane factoid on you guys and brace for impact: Sam Smith is only 25 years old.

I'll say it again for the people in the back.

Sam Smith, of "Stay With Me" fame, the same Sam Smith who reaches emotional depths and maturity some people wait their whole lives to achieve... the same Sam Smith who sounds like a literal angel when he sings and can evoke feelings deep within us that we didn't know were there... is barely allowed to rent a car legally.

ARE YOU GUYS OUTRAGED? I'M OUTRAGED!

Smith has the vivaciousness of a beautiful, wee lad, and it makes total sense that he is smooching dreamboat Brandon Flynn of 13 Reasons Why.

And yes, here's the part where I tell you that the two were spotted holding hands and kissing in New York City's Greenwich Village.

On Flynn's part, he never made an out-and-out statement about his own sexuality, but he did recently post a powerfully worded Instagram message in support of LGBTQ rights. In the post, he referred to the community as the collective "Us."

In response to a "vote no" message he saw written in the sky by a plane, Flynn wrote,

Just saw the "vote no" message in the sky, looming over Sydney. Thank you for raising money and hiring on a plane to write your lack of support amongst the clouds. I hope your hate and lack of understanding fades, just like those words will. Too many of my friends have been kicked out of their homes, kept in the closet, beat up, killed, ridiculed by church and state, institutionalized... and you are scared that if we vote YES, you won't be able to show your hate for Us. Fuck that. We've been scared shitless our whole lives thanks to all the stigmas that surround Us, stigmas that were set in place by the same kind of people who flew that plane over Sydney. We've fought, we've come out bravely even in our fear, and you wrote a message in the sky because you're scared. Equality takes courage, it worries me that too many people in this world lack the balls to stand up for what is right. #fuckhate

Smith left an "x" (aka a kiss) in the comments of Flynn's post.

Both men are soaring in their respective careers, with Flynn triumphing in the Netflix hit series 13 Reasons Why and Smith's new song "Too Good At Goodbyes" reaching number one on the UK Billboard chart.

Despite the song's tragic lyrics, it seems like Smith and Flynn are only saying hello. (Sorry.)

Regardless of where they're at in what seems to be a budding relationship, we are loving these two together.