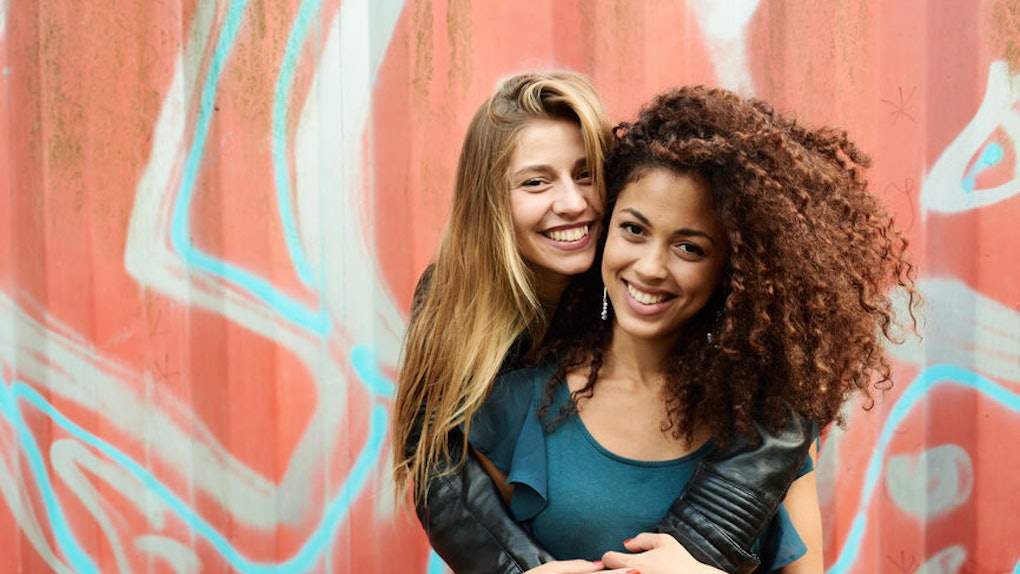 Are Hugs Good For You? Being A Hugger Benefits Your Mental Health, Study Says, So Embrace It

I, Julia Guerra, am a major hugger. Though I’m pretty good at reading people, and I'd never encourage an embrace if someone seemed uncomfortable with that level of intimacy, consider this a friendly PSA that if all signs point to you being open to it, I’ll definitely extend my arms and bring you in. Now, before you click out of this article and write me off as some weird, overly affectionate writer, a recent study showed that hugging is good for your mental health, so I’d just like to issue out a general “you’re welcome” to anyone I’ve ever cozied on up to to say hello, goodbye, or just as a gesture of endearment. I was only trying to help, guys.

Obviously there’s a time and place when hugging is appropriate (i.e. embracing in a business meeting is generally a no-go), but I’ve always been the type of person to hug when greeting family and friends, or to offer the gesture as a means of comfort in times of grief or frustration. Growing up, I would constantly ask my mom, “Can I have a hug?” if not for any reason other than wanting to feel that sense of closeness. On the days I’d request a hug upwards of three or four times in 24 hours, my mom would sometimes (understandably) roll her eyes and lazily pat my back, though she'd usually reciprocate wholeheartedly.

These days, I still cuddle up to my mom any chance I get (yes, even at 26 years old), but on a daily basis, I’m always wrapping my arms around my husband when he least expects it to express my love and affection, or when I’m just feeling a little clingy (no matter what he says, he loves it, BTW). On the average day, though, I really don’t hug excessively. According to new research, though, maybe I should start.

Given my job, I’ve read dozens upon dozens of studies, but this is probably the first to sincerely warm my heart. Published in the scientific journal PLOS One on Oct. 3, this (IMO) groundbreaking discovery that hugging is genuinely good for your mental health was uncovered by a team of researchers from Carnegie Mellon University, who interviewed over 400 men and women every night for two weeks on their everyday stressors, how many hugs they received each day, and their moods, ScienceDaily reports.

In the end, the study found that participants who received hugs on particularly bad days felt better post-embrace— as shown in the research by "a smaller decrease in positive emotions and a smaller increase in negative emotions," according to ScienceDaily — and those positive sensations continued on into the next day, acting as a kind of buffer separating the individual from any bad mojo they might’ve taken on otherwise. Of course, these findings are preliminary, so whether or not you'll actually benefit significantly from hugging will depend on your personality, how comfortable you are giving and/or receiving hugs, etc. For those who feel A-OK embracing on the spot, though, it’s a nice thought, right?

So what is it about hugs that make them so damn comforting? To my surprise, pharmacist and empowered wellness expert, Dr. Lindsey Elmore, says body heat and physical touch only account for a small part of this. There’s a physiological response happening in your body when you hug someone, Elmore tells Elite Daily over email. First, she explains, a hormone called oxytocin is released from the hypothalamus, aka the part of your brain that controls the nervous system. When oxytocin is released — after about six seconds or so of hugging, says Elmore — the hormone “bonds us to one another and reduces stress and anxiety.” If the fact that your body contains hormones meant to bond you with another human doesn’t bring you to tears, I don’t know what will. That is by far the most romantic thing I’ve heard all day.

Still, the warmth of another body cradling your own is nothing to overlook. According to Robert Glatter, M.D., an assistant professor of emergency medicine at Lenox Hill Hospital, Northwell Health, there’s a lot of value in the physical gesture. Hugging is part of a universal language, he explains: It’s a “safe” gesture that says, “everything’s going to be OK,” Glatter tells Elite Daily. Are you swooning? Because I’m swooning over here. What’s more, Glatter adds, hugs don’t just ignite a sense of physical warmth; they also inspire “a sense of security and protection,” leading to a calming effect “that warms your heart and soul.”

But on that note, maybe you’re actually cringing reading all of this because, to you, hugs are a little too close for comfort. This is totally normal, especially if you grew up in an environment where expressing emotion in that way just wasn’t a thing, psychologist Danielle Forshee, LLC tells Elite Daily. If you’re open to becoming a little more comfortable with hugs, though, she adds, it’s definitely possible with practice. “Practicing over time in small doses, receiving or giving physical contact to close people in their life might be helpful in starting to feel less awkward with physical touch,” Forshee says. “For example, putting your hand on someone’s shoulder or arm when they’re speaking to you can be a good starting point, and then [you can move] up to a half-hug or a kiss on the cheek, [and eventually] a full-blown hug.”

If you, like me, absolutely love hugs, then learning that hugs are good for your mental health probably just serves as an added bonus. Still, if you aren’t much of a hugger, you don’t have to force yourself to embrace everyone and their mother for the sake of squashing a bad mood. Go in for a side-hug, or don’t! High-fives are cool, too, and there’s no shame in giving yourself a hug when you need a warm embrace.

Physical touch isn’t for everyone, but if snuggling is your fave, the next time you’re in a slump, don’t hesitate to ask for a hug. It could be the difference between a bad mood and a stellar disposition.