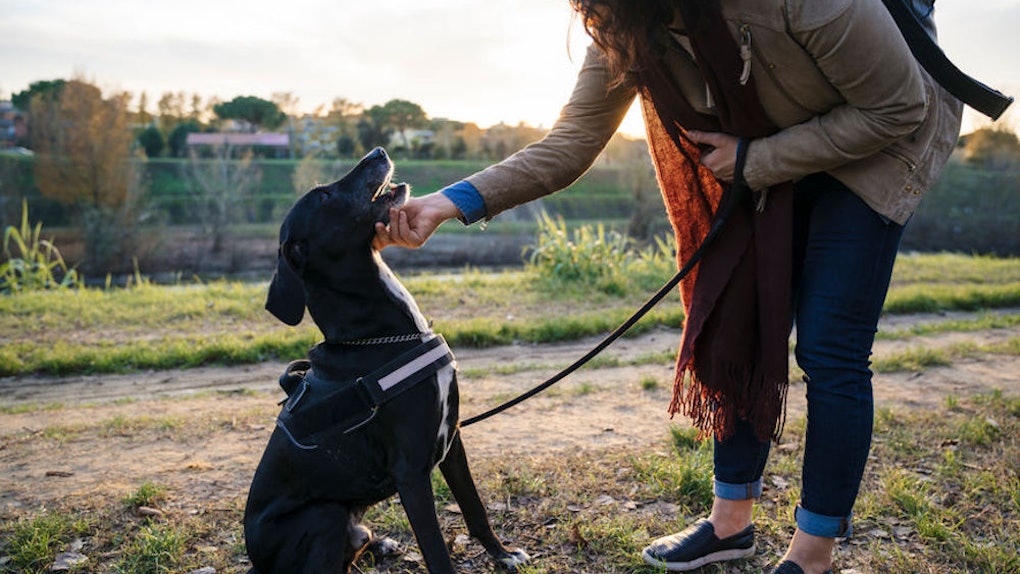 Are Dogs Really Smart? Science Says They're Not As Intelligent As You Might Think

One day last month, I could not stop laughing at our family's dog Hank. Although I love the little guy to the moon and back, he had me almost in tears because he could not figure out how to maneuver a long stick in his mouth through a narrow doorway. Even though he's only a little over a year old, it seemed pretty basic to me that he would have the spatial awareness to adjust the stick so that he could keep walking, but apparently I had underestimated him. So are dogs really that smart? According to a new study, your favorite canine companion probably isn't as much of a genius as you think he is.

The study, conducted by researchers from the University of Exeter and Canterbury Christ Church University, published in the scientific journal Learning & Behavior, showed that, unless you already think your dog is a major doofus, you might be overestimating how smart your pup is. “During our work it seemed to us that many studies in dog cognition research set out to ‘prove’ how clever dogs are,” Professor Stephen Lea, of the University of Exeter, said in a press release. But, apparently, Lea and his team's findings didn't actually demonstrate as much.

Now, before you go and scrape that "My dog is an honor student" sticker off of your bumper, there's a catch. The researchers didn't find that dogs are particularly unintelligent, per se, but rather, that they have similar intelligence levels of animals in three groups: other carnivorans, other social hunters, and other domestic animals.

Basically, your fur baby is probably about as smart as animals like wolves, cats, spotted hyenas, chimpanzees, dolphins, horses, and pigeons, according to this research, but not particularly smarter than these creatures, as is often believed.

Still, some experts say dogs are about as smart as a 2-year-old child. "In previous studies, dogs have demonstrated a level of intelligence equal to that of a toddler," says Dr. Jennifer Freeman, DVM, PetSmart’s resident veterinarian and pet expert. "It’s been proven that they can understand up to as many as 250 words, signs, and gestures."

But Dr. Freeman tells Elite Daily that intelligence can definitely vary from pup to pup, and even from breed to breed. "While most dogs can learn simple commands, there are a few breeds out there, such as border collies, that have been tested and demonstrated knowledge of hundreds of words and commands," she explains.

If you're curious about whether your furry pal is a little Einstein or not, you can probably guess by whether or not they pick up tricks easily. "In general," Dr. Freeman tells Elite Daily, "pet parents can usually guess their dogs’ intellectual abilities based on how they respond to training." So if, after weeks of training, your little pride and joy just can't seem to figure out that sitting on command gets him a tasty treat, intelligence might not be his strongest quality.

However, dogs are skilled at a number of different things, even if they aren't exactly the smartest members of the animal kingdom. For example, they can definitely pick up emotional cues: In a study published in the scientific journal PLOS One, researchers showed 31 dogs photos of threatening, pleasant, and neutral faces to figure out how they reacted. The research found that dogs are pretty good at determining human emotion by looking at a person's eyes and mouth. So if your pup notices you crying and comes up to lick your face, she probably isn't just scrounging for a treat. She might just understand what you're feeling.

But, even if your dog is too dumb to figure out that the vacuum cleaner isn't a threat, or sometimes gets scared of her own tail, that doesn't mean she's any less perfect. "Regardless of a dog’s intelligence, however, the bond between a pet and their pet parent can be very deep and meaningful," says Dr. Freeman.