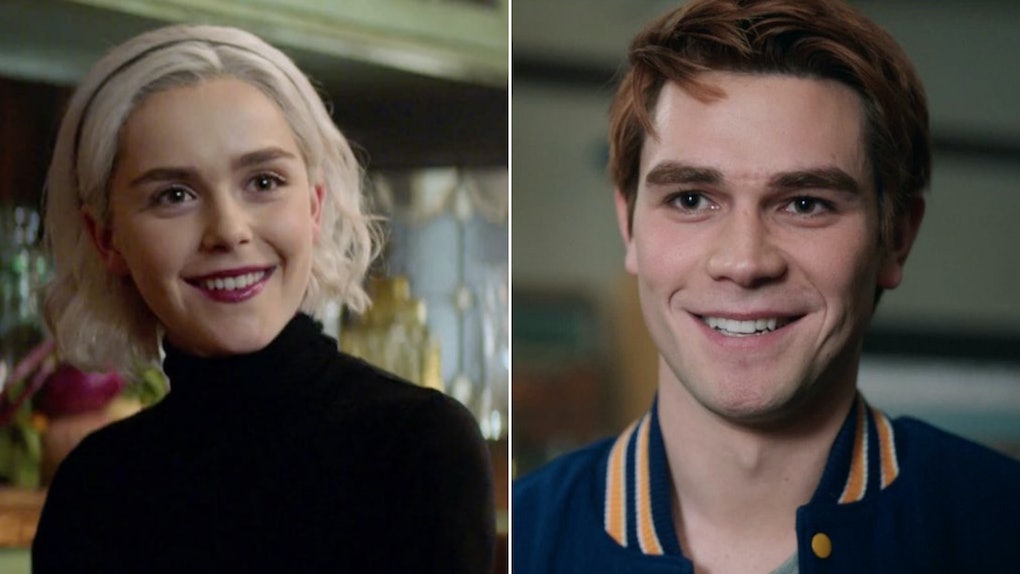 Archie & Sabrina Are Dating In The Archie Comics Now, So Is A Crossover Coming?

Riverdale fans have been wondering if/when Sabrina Spellman will be making her appearance in the teen drama since it first began, and that curiosity has only grown since the companion series Chilling Adventures of Sabrina premiered last year. Well, the current run of Archie Comics — which both shows are based on — may be hinting that a crossover is on its way. Archie and Sabrina are dating in the Archie Comics right now, so we may actually see some romance sprout up between Riverdale and Greendale in the future.

The surprising new relationship actually began last month with the landmark release of Archie Comics' 700th issue. The pivotal new volume centered on Betty and Veronica both trying to reignite their respective relationships with Archie, but Archie wound up running off, leaving them to wonder if he was seeing someone else. In the end, that someone else is revealed to be Sabrina Spellman. Archie and Sabrina had been keeping their relationship a secret, but a first look at the upcoming issue #705 (due out this May) reveals that they will be going public with their romance. The new relationship is such a big deal, in fact, that Archie Comics is even rebranding itself Archie and Sabrina for the arc.

Of course, Archie Andrews and Sabrina Spellman are also helming their own TV shows right now, so could this new comic-book arc mean a crossover is about to happen? Well, not exactly, but it is also not nothing. The Archie and Sabrina arc is clearly going to be a major one since the comics' name is changing, but Riverdale and Chilling Adventures of Sabrina are very different beasts than their comic-book counterparts. Still, showrunner Roberto Aguirre-Sacasa has made it clear that he is intent on a Riverdale and Sabrina crossover happening at some point, and Sabrina actually did have a small Riverdale crossover moment in its debut season.

Plus, both Archie and Sabrina's love lives on their respective TV shows are really in turmoil right now. Archie broke up with Veronica a few episodes back, and although he is hooking up with Josie now, the lead Pussycat is set to leave Riverdale at the end of the season to join its new spinoff series Katy Keene. Things are not much better for Sabrina. Our favorite teenage witch ended things with Harvey to fully embrace her magic side in the Season 1 finale, and although she tried to keep their friendship alive in the show's Christmas special, he ended up giving her the cold shoulder even more. Sabrina still has a potential romance with her Academy of the Unseen Arts flirtation Nick Scratch, but they have yet to advance beyond furtive glances in the hallways.

With both Archie and Sabrina kind of in relationship limbo right now, maybe it is the perfect time for them to find each other in a potential crossover episode. Of course, a long-term relationship between the two TV characters does not seem sustainable since they are both pretty much bound to their respective series, but do not be surprised if sparks fly when the two finally meet up for the first time.

More like this
Joshua Bassett Almost Played Harvey In 'Chilling Adventures Of Sabrina' & I'm Shook
By Dylan Kickham
Who Is Cleo On 'Outer Banks'? Carlacia Grant Is New To Season 2
By Ani Bundel
7 'Game Of Thrones' Spinoff Ideas HBO Should Def Consider
By Ani Bundel
Stay up to date