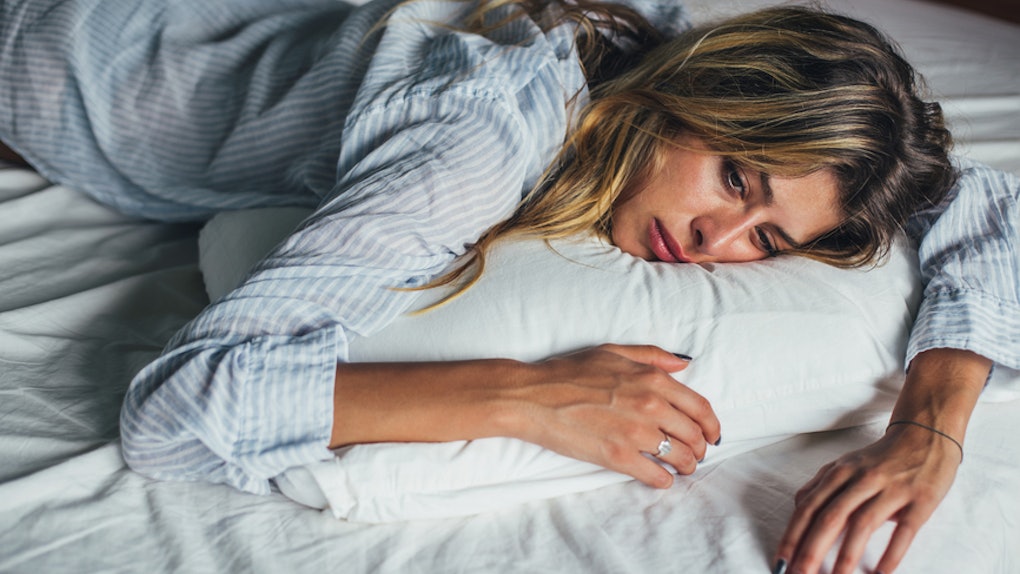 We're deep into the midst of April and if the weather still feels gray and gloomy, you have my stamp of approval for taking a mental health day off of work. After a long, dreary winter, our hearts are starved for an injection of sunshine and color. If the prolonged cold has got you down, then it only makes sense that starting April 9, 2018, this week will be the worst for these zodiac signs: Scorpio, Sagittarius, and Pisces. While it'll all be OK in the end, you might feel like the world is squeezing the life out of you.

We're dealing with the last few punches of Mercury retrograde until it ends on April 15. Hang tight on making any serious commitments in the meantime, for the communication crisis and technological madness still isn't over. Until then, the sun, planet of the self, will also square Pluto, planet of transformation. This could drag all the skeletons in your closet out to play, unearthing insecurities and reminding you of trauma in your past.

Luckily, the chaos will subside by Sunday, April 15, the night of the new moon in Aries. A new moon always grants us with a new beginning, cleansing your pain until your soul becomes a blank slate. However, this new moon will also be conjunct Chiron, planet of the wounded healer. This could infuse your new beginning with a melancholy understanding of where you've come from. While you might feel extra sensitive, it will only motivate you to create a better future.

Mercury retrograde has been wrecking your sixth house of health since Mar. 22. After two whole weeks of feeling totally vulnerable to exhaustion, both mentally and physically, you're probably at your last few straws by now. You're also likely feeling the shadow period of your ruling planet, Pluto, going into retrograde next week on April 22. To add more complications into the mix, the sun spends a large amount of the week squaring off Pluto. All of this is could make you feel very pessimistic and moody. You might contemplate sleeping until the week is over.

However, the pain will begin to lessen a bit by April 15, when Mercury Rx ends and is replaced by a rejuvenating new moon in Aries. You should fill your time with hopeful activities rather than spiraling into negative thoughts.

Your love life might feel extremely draining by now. For the last two weeks, Mercury, your love planet, has been in retrograde. If you're in a relationship, things might be tense with your partner. It might feel like you're misunderstanding each other, like you're not on the same page. If you're single, you might feel frustrated by your dating prospects. Finding someone who's a good match for your unique, wild self might feel like a lost cause. With Venus and Mars forming a trine, you'll feel romantic and passionate; you just might not know who to share it with.

Luckily, Mercury Rx ends on April 15 and the kinks in your love life will inevitably smooth out. The new moon in Aries will give you the kick in the butt you've been craving, and regardless of the state of your love life, you'll feel more confident than ever.

Pisces: You Might Be Frustrated By Where You're At In Life

You've been on an upward climb in your career for the last few months. This is why Mercury retrograde's effect on your financial state might be making you feel hopeless and frustrated by the road blocks. The sun and Pluto squaring each other might also make the stress on your bank account feel personal, like there's something wrong with you. If might feel like it's all your fault that you're in the unfavorable position you're in, especially because there are people who are probably relying on you right now. You pride yourself on being able to provide, both emotionally and materially. Your inability to do so right now might make you feel useless.

However, Mercury Rx is almost over. On April 15, its angry energy will dispel and a new moon in Aries will fill you with motivation and vitality. Use this time to contemplate your options, to brainstorm new projects. By the end of the week, you'll work harder than you ever have.