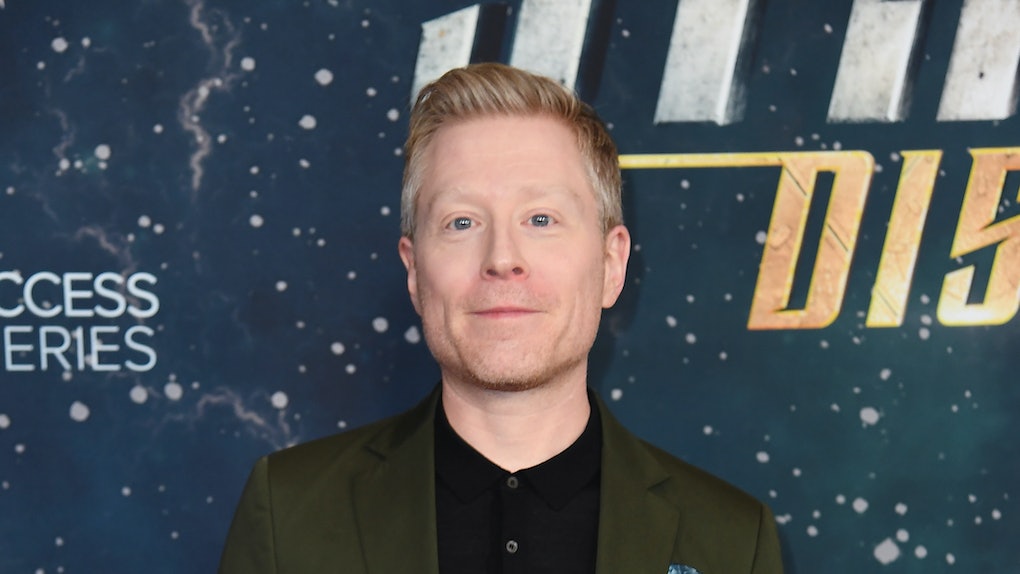 Anthony Rapp's Voiceover During 'Rent: Live' Had Fans So Happy

Rent: Live is currently broadcasting on FOX, and the original Broadway cast confirmed earlier this week they would be making a cameo in the show by tweeting pictures from backstage. The Rent: Live cast confirmed during a commercial break that the OG Broadway cast would be performing with them, but one unexpected surprise fans got was Anthony Rapp (the OG Mark Cohen) doing a voice over during the show. And Anthony Rapp's voice over during Rent: Live brought fans ALL the joy.

Rapp's familiar voice could be heard as the characters Collins, Angel, and Mark were on their way into a group therapy session for those living with AIDS. Rapp was heard listing facts about AIDS and what it was like during the AIDS crisis in the 1980s and early 1990s. According to amfAR, the Foundation for AIDS Research, by 1991 (the year this version of Rent takes place), over 150,000 people had died of AIDS and the Centers for Disease Control and Prevention estimated that 1 million Americans had been infected with HIV.

The moment was emotional enough, and almost immediately, fans started to notice the familiar voice and took to Twitter to figure out if everyone else was hearing what they were hearing. And they were right: it surely was Anthony Rapp doing the voice over. Rapp originated the role of Mark Cohen in the original Broadway cast of Rent, then he (along with many other members of the OBC) reprised his role in the 2005 film.

Basically, you can't spell Rent without Anthony Rapp, so fans were very happy to have gotten this cameo from him.

Rapp and lots of the other original Broadway cast of Rent are currently at the live broadcast to be part of the magic. Well, the footage that's currently airing was actually filmed previously, as the show's Roger (Brennin Hunt) broke his foot during rehearsal. The production decided to air its rehearsal footage live instead of broadcasting a live performance tonight. The cast is still doing the live show for the audience, however, according to videos on Twitter being posted from the show. (Hunt is in a wheelchair in the videos.)

Rapp, Idina Menzel, and other members of the OBC have been tweeting photos from backstage all week leading up to tonight's broadcast.

Rapp tweeted this photo of him with other members of the OBC.

The picture included Idina Menzel (the OG Maureen), Adam Pascal (the OG Roger), Jesse L. Martin (the OG Tom Collins), Daphne Rubin-Vega (the OG Mimi), and Wilson Jermaine Heredia (the OG Angel). All but Daphne Rubin-Vega also reprised their roles in the film version of the show. In the film, Rosario Dawson played Mimi. Rapp captioned the tweet "Family," and it's making me very emotional!!

Later on in the show, another amazing shout out to Mark Cohen/Anthony Rapp was thrown in via an iconic costume.

As Angel was looking for a new coat to buy Collins, the person selling them the coats picked up the blue and maroon sweater that was Mark Cohen's most iconic costume.

The best part of this entire experience will no doubt be when Rapp, Menzel, and the rest of the original Broadway cast appear to sing a song from the show. NO DAY BUT TODAY, Y'ALL.