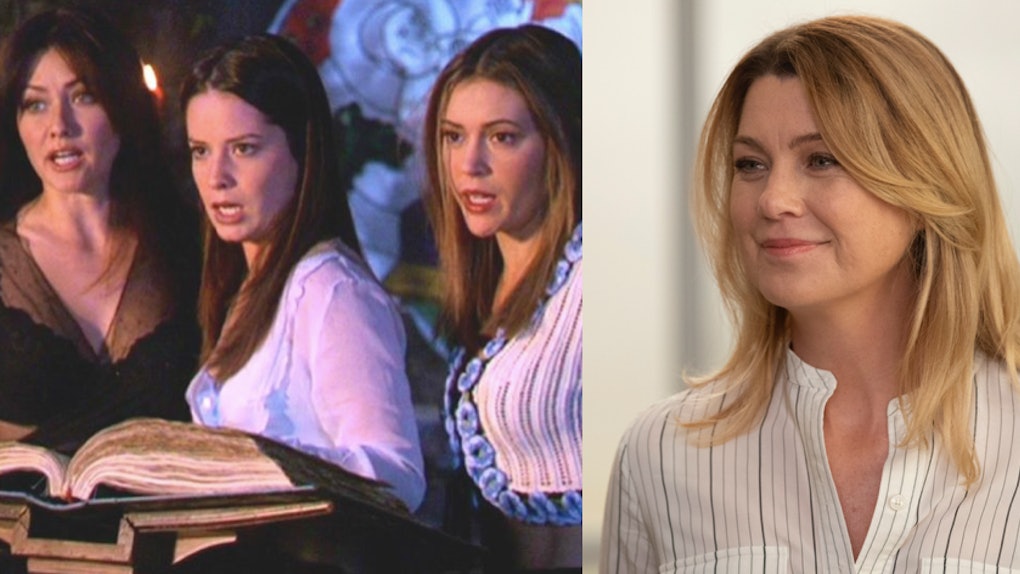 Fans were already eagerly waiting their return to Grey Sloan Memorial for Season 16 of Grey's Anatomy, but they now have even more reasons to get excited: One of the season's first episodes will have a mini-Charmed reunion in store. Alyssa Milano and Holly Marie Combs will guest-star on Grey's Anatomy Season 16, bringing the Power of Three back in your life.

On Sept. 16, ABC announced a series of cast reunions scattered across its fall programming, including a Grey's Anatomy episode featuring former onscreen sisters Milano and Combs. The actors starred as two of the three Halliwell sisters on Charmed, which ran on The WB from 1998 to 2006. The series followed the sisters, also known as the most powerful "good" witches on their show, who used their magic to protect others from otherworldly threats. Beverly Hills, 90210 star Shannen Doherty starred as third sister Prue alongside Milano's Phoebe and Combs' Piper before Doherty left the series in Season 3; Rose McGowan subsequently joined as long-lost sister Paige.

Although Combs and Milano aren't connected to the ongoing Charmed reboot and have expressed dissatisfaction with the 2018 series, they clearly have no qualms about reuniting with each other. According to People, Grey's Anatomy's Oct. 10 episode will star Milano and Combs as two sisters who must decide whether to keep their third sister alive when she's declared brain dead after an accident at a construction site. A photo released by ABC shows the women in character at Grey Sloan, seemingly in a grim-looking meeting with one of the doctors.

The episode, aptly titled "Reunited," also brings Milano and Combs back together with former Charmed writers Krista Vernoff and Andy Reaser, now executive producers of Grey's Anatomy. Following ABC's announcement of several cast reunions, Combs used the network's promotional hashtag on Twitter, writing, "#castfromthepast with all the feels and I mean ALLLLLLLLLLLLLLLLL." On Instagram, Milano wrote about the news, "This is going to be fun!"

Before Grey's Anatomy delivers sweet sisterly love, the season will begin by catching viewers up on the aftermath of Bailey's (Chandra Wilson) decision to fire Meredith (Ellen Pompeo), Webber (James Pickens Jr.), and Alex (Justin Chambers) after they committed insurance fraud. ABC's description of the Sept. 26 season premiere, "Nothing Left To Cling To," reads:

Meredith, Richard, and Alex must deal with the consequences after Bailey fires them from Grey Sloan for insurance fraud. After disappearing in the fog, Jackson (Jesse Williams) helps a man in a dangerous situation, as his relationship with Maggie (Kelly McCreary) comes to a new crossroad. Meanwhile, Tom (Greg Germann) gets new responsibilities at the hospital that throw the doctors for a loop.

Viewers can also likely expect updates on Teddy (Kim Raver) and Owen's (Kevin McKidd) rekindled relationship after welcoming their baby, as well as Jo's (Camilla Luddington) wellbeing after entering treatment for her mental health. Hopefully there won't be too many life-or-death situations at the hospital to distract fans from the Charmed reunion several weeks later, but regardless, Milano and Combs' visit is sure to be a magical one.