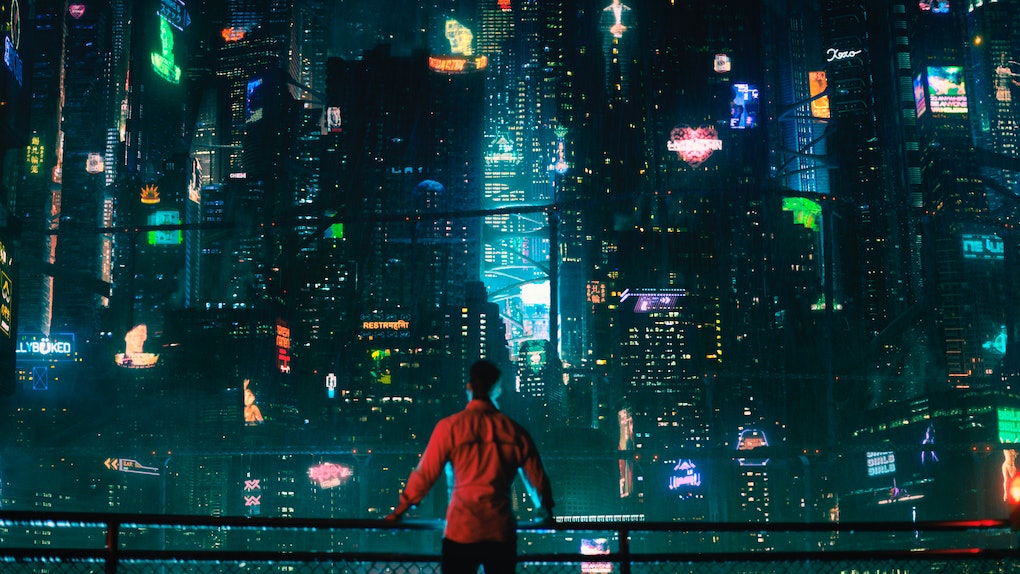 Netflix accidentally hit pay dirt with a little oddity of a show called Stranger Things, which was pitched as "What if Spielberg directed a Stephen King story?" With audiences responding extremely well to the science fiction-y nature of the piece, as well as the '80s nostalgia, it seems that Netflix is going to try for sci-fi without the '80s nostalgia. Instead they'll add in the lavish budget of other popular shows like The Crown and see if that works. The result: the Altered Carbon Netflix trailer, which was released today ahead of the show's February debut next year.

Altered Carbon arrives with a pedigree. The show is based on the 2002 novel of the same name by Richard K. Morgan, which won the Philip K. Dick Award in 2003. It is classified more as "cyberpunk" than "traditional" fantasy. The writer and producer is Laeta Kalogridis, for whom this has been a passion project. The pilot was directed by none other than Game of Thrones' own Miguel Sapochnik, who created such masterpiece episodes as Season 5's "Hardhome" and Season 6's "Battle of the Bastards" and "The Winds of Winter."

Check out the announcement trailer below. (But pleased by advised before you press play that some of the images are definitely in the NSFW category.)

What the heck did you just watch? Let's discuss.

Altered Carbon is the first in a trilogy of futuristic novels by Morgan. (The follow up novels are Broken Angels, and Woken Furies.) While the novels themselves suggest they are set about 500 years or so in the future, circa the 2600s, Netflix has moved the time jump back a bit to 300 years instead, to the 2400s.

In this future, humans have had parts of their spines replaced with "cortical stacks," in which all of their memories are downloaded. When they die, their "stacks" are then stored until they can be installed into a new "sleeve," (IE: a body.)

Most people choose to be re-sleeved at least once, but since most cannot afford to have a endless supply of young. healthy sleeves and have to go through the aging process twice, they usually choose to deactivate after the second round. Those who continually re-sleeve themselves are called "meths."

As one can imagine, certain religions would have serious ethical concerns with this rehoming of the soul over and over. The Catholic church, for instance, has gotten the government to past legislation keeping their believers from undergoing this procedure. But it also makes Catholics a target for murder, since the victim cannot be re-sleeved to testify.

Enter detective/elite UN agent Takeshi Kovacs (Joel Kinnaman.) He's just been downloaded after being stored for years on end, and hired by a meth named Laurens (James Purefoy) to investigate a murder: his own.

Everyone claims Laurens committed suicide. He's in a "temporary sleeve" until a permanent one can be located, due to the sudden nature of his demise. But though Laurens memories haven't downloaded yet, he's certain it was murder.

In the novel, Kovacs is an ex-military man, part of the Envoys. After downloading, he is racked with guilt over his memories of atrocities gone by. In the show, he's also a killer for hire who was part of a failed revolution before being taken down and his "stack" stored.

The show's cast also includes Renee Elise Goldsberry, as Quell, the leader of the Envoys, Kovacs' old unit and Martha Higareda as detective Kristin Ortega, who Kovacs sort of teams up with.

The first season consists of ten episodes. Rumor has it that the cost of the production is the highest in Netflix history, beating even The Crown, which cost in the neighborhood of $130 million per season.

More like this
'Selena: The Series' Part 2: Netflix Release Date, Trailer, Cast, & More News
By Dylan Kickham
10 Quotes From Netflix's 'Enola Holmes' That Are So Freaking Relevant
By Rachel Varina
Who Did Emily Poison? 'The Handmaid's Tale' Season 2 Is Off To An Intense Start
By Ani Bundel
Stay up to date