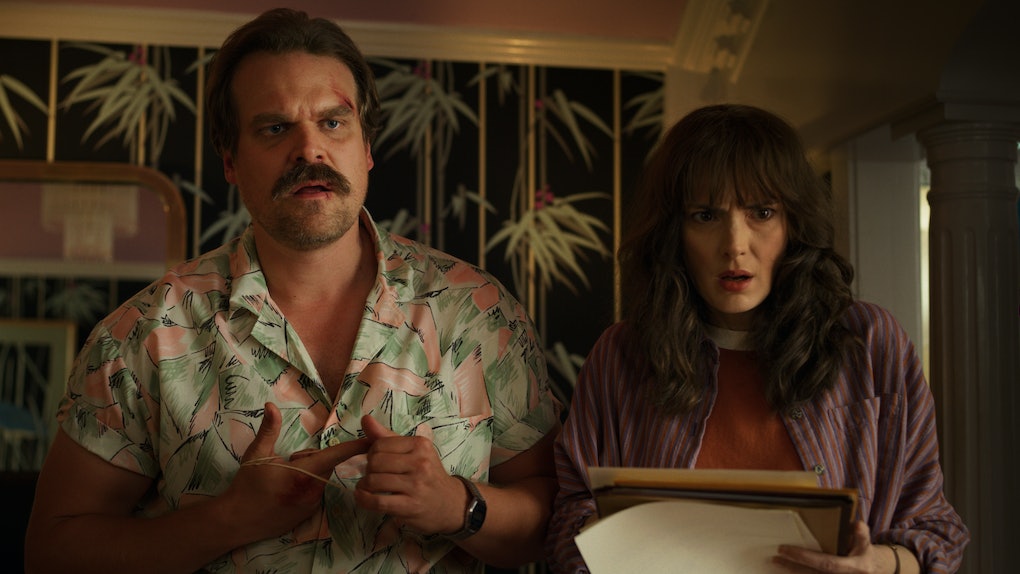 Alexei's Final Scene In 'Stranger Things' Season 3 Will Wreck You

This post contains spoilers for Season 3 of Stranger Things. From its opening moments, the new season of Stranger Things made it clear that Russians would play a major part in the latest Hawkins adventure. Who knew a mayor in small-town Indiana would cooperate with Russians wanting to build a secret lair underneath the local mall? While the kids faced their fair share of evil foreigners, Hopper and Joyce kidnapped a Russian scientist, Alexei, who turned out to have a friendly streak. This unexpected friendship made Alexei's final scene in Stranger Things Season 3 especially heartbreaking.

First seen in the opening episode's insight into Russia in 1984, Alexei (Alec Utgoff) and his colleague were working on the machine that eventually made its way to Hawkins to keep the gate to the Upside Down open. The machine broke down, disappointing the Comrade-General to the point of killing Alexei's co-worker. He told Alexei that he had one more year to fix the mistakes, and he clearly did, as he was next seen in Hawkins, tinkering on the property Mayor Kline (Cary Elwes) had given to the Russians.

Tracing the origins of the town's major power outage to one of the farm properties Kline had sold off, Joyce (Winona Ryder) and Hopper (David Harbour) found Alexei and another scientist working on a different machine. A Russian hit man who previously attacked Hopper at the abandoned Hawkins Lab then arrived, prompting Hopper and Joyce's kidnapping of Alexei.

Their grand escape came to a halt when their car broke down. While Joyce attempted to communicate with the Russian-speaking Alexei about the magnetic field, Hopper remained mistrusting of him. It took Alexei's warnings that the car was about to overheat for the two to realize that Alexei might not be as ruthless as the other Russians in town. After swiping a car from a 7-Eleven parking lot, the group headed to conspiracy theorist Murray (Brett Gelman) for help with translating Alexei's information.

Through these translations sessions, Hopper and Joyce learned about the Russian hub holding the keys crucial to the destruction of the machine. Alexei also revealed that the energy coming from the machine was breaking down the wall to open another world, which Hopper and Joyce correctly assumed was the Upside Down. After calling Dr. Owens' (Paul Reiser) contact for backup, the group headed to the Fourth of July fair to warn the kids, who were actually scattered between the Russians' hideaway and Hopper's cabin.

As Hopper and Joyce got caught on a ride with Mr. and Mrs. Wheeler, Murray introduced Alexei to the American carnival and its rigged games, which Alexei was determined to beat. He succeeded, but as he approached Murray, the Russian hit man popped out of the crowd, stealthily shooting him without drawing attention. Murray took him aside and tried to find help, but by the time he and Joyce reached him, Alexei was already dead.

The adults' sadness upon Alexei's murder definitely summed up viewers' reactions to the twist. Who knew one of Season 3's standout moments would come from this unexpected character? Alexei may be dead, but as the season's post-credit scene hinted, the people of Hawkins might not be done with the Russians just yet. Season 3 of Stranger Things is currently streaming on Netflix.