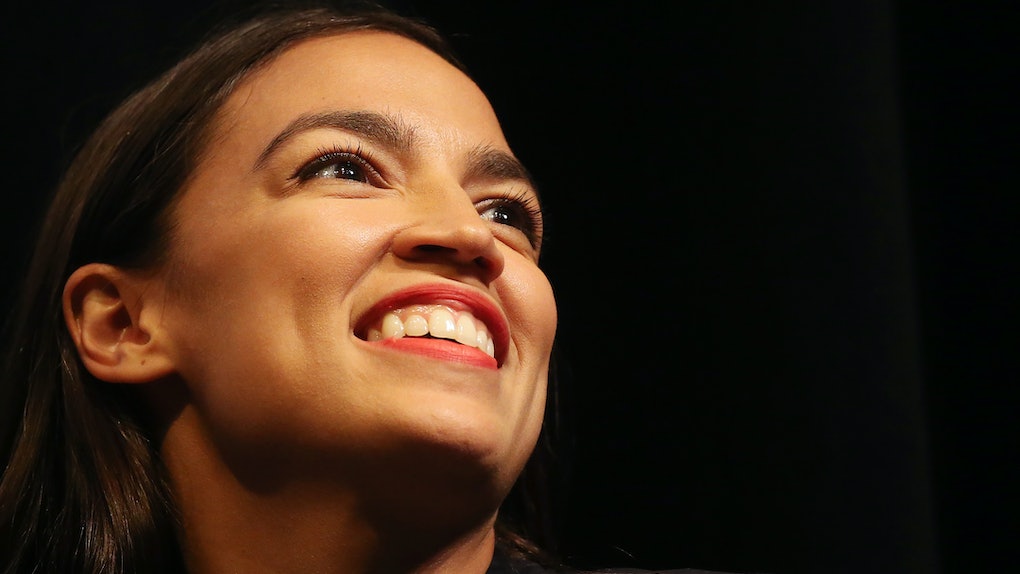 Alexandria Ocasio-Cortez is proving yet again that she's just like some of us. When she's not trolling her haters with song lyrics and other fun references, she's busting moves outside her workplace and channeling early 2000s internet vibes on social media. If you haven't seen the latter, namely Alexandria Ocasio-Cortez's tax plan video game meme, let me just say that it might be one of the most millennial things you've seen from the Bronx native yet.

Ocasio Cortez shared the meme on Friday, Jan. 18 in response to a poll shared by New York Magazine, that appears to show a large number of Republican voters reportedly agree with her proposal to tax the super-wealthy. In fact, the results of a Hill-HarrisX survey conducted over the weekend of Jan. 11 - Jan. 13, per the publication, shows that 45 percent of GOP support her proposal that earnings higher than $10 million should be taxed 70 percent. Responding to the news of her plan's popularity, the newly-elected congresswoman wrote on Twitter, "All your base (are) belong to us," decorated with an alien-style emoji.

As Mashable points out, Ocasio-Cortez was referring to the "base" that pushed President Donald Trump into office. But there's much more context to her tweet. The phrase, "All your base are belong to us," dates back to a game from the early '90s called Zero Wing for the Sega Mega Drive (which is known as the Sega Genesis to Americans). Eventually, in the early 2000s, the line became a popular phrase on the Something Awful message board, which was like social media before there was a social media, and Ocasio-Cortez appears to remember it.

I don't know about you, but I think it's now safe to say that Ocasio-Cortez is a national treasure that must be protected at all costs.

Seriously, she's only been a congresswoman for approximately 16 days and she's already shared enough hilarious moments to last us a lifetime. Another moment that took over headlines recently came on Jan. 3, when a video of Ocasio-Cortez dancing on a rooftop during her Boston University days circulated the internet. The video shows her grooving to Phoenix's 2009 hit "Lisztomania" with some moves courtesy of the '80s cult classic The Breakfast Club, from hair twirling to jolly shimmying. While the video was released with the intention to smear the rising Democrat, it earned her widespread acclaim, with stars of the film even extending her personal invites into the "Club."

Despite the praise, Ocasio-Cortez, who is known for her fierce clap backs, went after her trolls, sharing a post to social media on Jan. 4 that was absolute gold. It shows her busting more moves — this time outside of her congressional office — to Edwin Starr's "War." She captioned the post, "I hear the GOP thinks women dancing are scandalous. Wait till they find out Congresswomen dance too! Have a great weekend everyone :)" Sitting at nearly 800,000 likes, it's reportedly her most popular tweet ever, because it really is that amazing. Check it out:

Whether you like her or her policies or not, you can't deny that she's an entertaining figure. Let's see what she pops up with next.