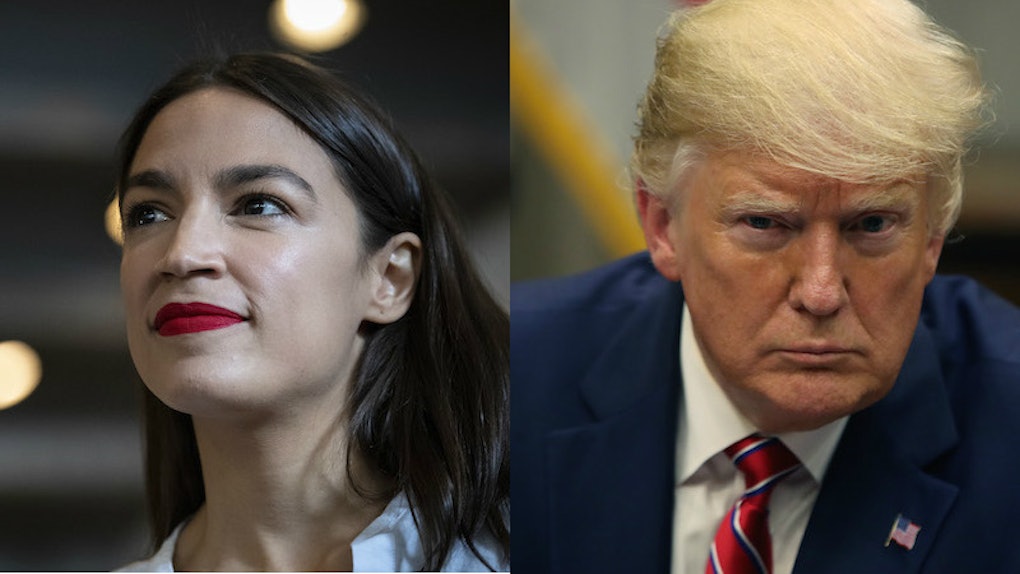 There's nothing like a good Twitter battle to start someone's week off strong. Over recent months, Democrats have increased their calls to impeach Donald Trump, which the president has continuously claimed can't happen. Well, apparently that hasn't stopped House Democrats from speaking out on the issue, because Rep. Alexandria Ocasio-Cortez responded to Donald Trump's impeachment tweet in the most New York way possible.

The Twitter feud began when Trump responded to Ocasio-Cortez's Sunday, June 16, appearance on ABC News' This Week, where she stated she thinks there's a strong likelihood that Democrats will lose the 2020 presidential election to Trump for a second time. "I think that we have a very real risk," Ocasio-Cortez said.

Later that day, Trump took to Twitter to call out Ocasio-Cortez's comments, and said the chance of him being reelected is the only reason why Democrats are pushing for impeachment. He wrote,

Rep. Alexandria Ocasio-Cortez. “I think we have a very real risk of losing the Presidency to Donald Trump.” I agree, and that is the only reason they play the impeach card, which cannot be legally used!

Never one to back down from a fight, Ocasio-Cortez responded to Trump's tweet with a clap back of her own. In the tweet, the Bronx native told the president she'd "call his bluff any day of the week," and finished her tweet with a classic #boybye hand wave emoji. She wrote,

Mr. President, you’re from Queens. You may fool the rest of the country, but I’ll call your bluff any day of the week. Opening an impeachment inquiry is exactly what we must do when the President obstructs justice, advises witnesses to ignore legal subpoenas, & more. Bye.

As of publication, there have been no serious moves to impeach the president.

While appearing on This Week, Ocasio-Cortez and ABC News Chief White House Correspondent Jonathan Karl discussed whispers of President Trump's potential impeachment and the upcoming 2020 presidential election. Ocasio-Cortez stated that the pressure to impeach Trump grows every day, and she believes there's a strong possibility that he will be reelected in 2020. She said,

I think that we have a very real risk of losing the presidency to Donald Trump if we do not have a presidential candidate that is fighting for true transformational change in the lives of working people in the United States.

Even if the 2020 presidential election feels like a lifetime away, the showdown will be here before we know it. So far, familiar faces such as Massachusetts Sen. Elizabeth Warren, former Vice President Joe Biden, California Sen. Kamala Harris, and former Texas Rep. Beto O'Rourke have all thrown their hats into the ring and hit the road hosting campaign rallies and town halls.

Of course Trump isn't one to shy away from friendly (and sometimes not so friendly) competition, but recent polls might suggest that the president should be paying attention. On Monday, June 17, reports surfaced that the Trump administration fired several of its own pollsters after results showed the president is losing in key states such as Michigan, Wisconsin, and Pennsylvania. The Trump 2020 campaign did not immediately respond to Elite Daily's request for comment on the matter. That same day, Trump took to Twitter to claim the results were "fake polls," and he wasn't losing to the Democratic candidates, which he referred to as a "motley crew." He wrote,

Only Fake Polls show us behind the Motley Crew. We are looking really good, but it is far too early to be focused on that. Much work to do! MAKE AMERICA GREAT AGAIN!

Another day, another Twitter feud. It's probably unlikely that Ocasio-Cortez and Trump will see eye to eye in the near future, but clearly these two aren't afraid of going head to head. Let's see what 2020 has in store for us.