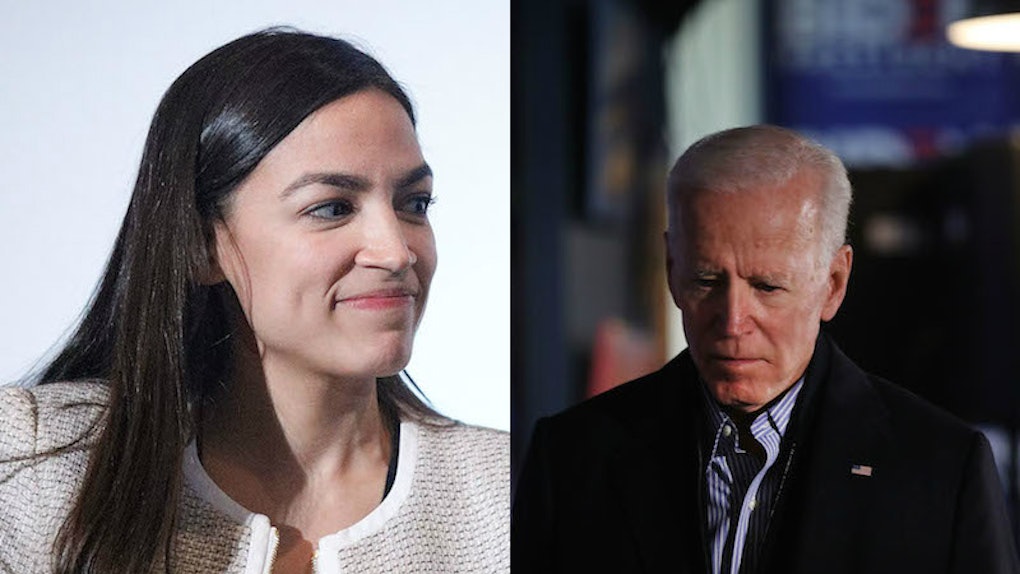 As the 2020 presidential election approaches, more candidates are introducing their plans to fight against problems concerning gun reform, higher education, and more. However, a certain former vice president reportedly has a plan to combat climate change, but not everyone is a fan of his approach. Alexandria Ocasio-Cortez called out Joe Biden's climate change plan in a strong statement. Clearly she's not holding back.

On May 10, Reuters reported that Democratic presidential candidate and former vice president Joe Biden plans to combat climate change with an approach that would appeal to both environmentalists as well as blue-collar voters. The plan, per reports, includes rejoining the Paris Climate Agreement and regulating the United States' fossil fuels and nuclear energy emissions, per Reuters. According to Reuters, neither Biden nor his team have gone into detail about this plan so far, but it's already gained a lot of attention from the public. Elite Daily attempted to reach representatives of Biden for comment or details on the reported plan, but did not immediately hear back.

However, some have criticized Biden's reported plan for being too lenient compared to other presidential candidates' proposals, and suggested it might not combat climate change decisively enough. On May 14, New York Rep. Alexandria Ocasio-Cortez appeared to address Biden's climate change plan during an event in Washington, D.C., where she called out "middle of the road" approaches to climate change. Without naming Biden directly, she said,

I will be damned if the same politicians who refused to act then are going to try to come back today and say we need to find a middle-of-the-road approach to save our lives. That is too much for me.

The same day, Biden responded to Ocasio-Cortez's criticism while speaking to reporters in New Hampshire, denying that he had an intent to be "middle of the road" and saying that he didn't think Ocasio-Cortez was referring to him. He said,

I’ve never been 'middle of the road' on the environment. Tell her to check the statement that I made and look at my record. I don't think she was talking about me.

Ocasio-Cortez is one of a number of Democrats who have pushed for legislation aimed at combatting climate change, having introduced the Green New Deal in November 2018.

Judging by Ocasio-Cortez's comments, it's clear she's not playing around when it comes to climate change. Since the congresswoman introduced the Green New Deal proposal in November 2018 alongside Sen. Ed Markey (D-Massachusetts), she's emphasized the importance of combatting climate change immediately following reports that climate crisis could occur if no change happens. Following her event, Ocasio-Cortez also took to Twitter to call out Biden even further, retweeting criticism of the reported plan and saying that his reported plan is a "deal breaker."

The Green New Deal has received a lot of attention from politicians and the public alike due to its serious approach towards fighting climate change. The deal contains a series of demands that include: converting the United States to 100% renewable energy in accordance with a "smart" energy grid, pushing towards removing CO2 from the atmosphere, and treating climate justice as its own form of social justice. This plan is a resolution to try to reverse the effects climate change has already inflicted, and attempt to rectify the problem.

While Ocasio-Cortez may be the public face of the operation, the Green New Deal was developed with youth-led activist group the Sunrise Movement. Waleed Shahid, the communication directors of Justice Democrats, explained in an emailed statement to Elite Daily in November 2018 why climate change is a social justice issue. According to Shahid, this resolution could help the lives of lower-income families and people of color. The statement read,

Catastrophic climate change touches so many other intersecting issues. The communities that are most impacted tend to be working class or people of color while the people most responsible for causing climate change are white and ultra-rich.

The conversation surrounding climate change has never been more important. In October 2018, the United Nations' Intergovernmental Panel on Climate Change (IPCC) released a report announcing that there's only 12 years left to limit climate change before a climate crisis could arise. The report also stated that if climate change is not addressed, then the world could face a climate crisis as early as 2040, with risks of food shortages, wildfires, and total extinction of coral reefs.

No matter which climate change plan the world goes with, let's hope it's effective. For all our sakes.