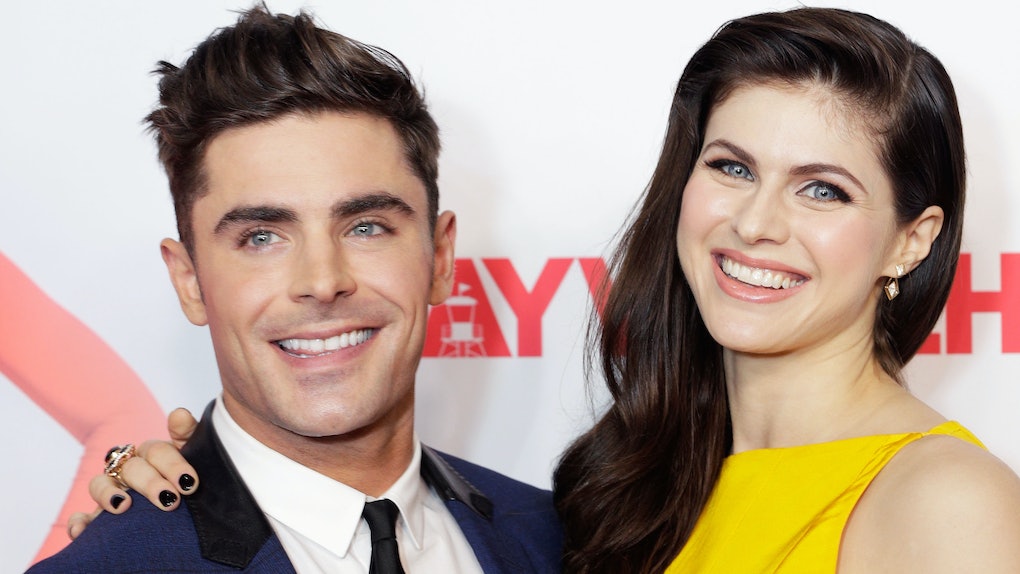 Alexandra Daddario is a name you've probably been hearing a lot recently — and with good reason. Not only is she a talented actress, working alongside prominent leads in shows and films like True Detective, Baywatch, and The Layover, but she's also a spokesperson for the United Nations Foundation, and is Kleenex Brand's newest ambassador (are you keeping up?). With all of these accomplishments under her belt, it begs the question: Is there anything that Alexandra Daddario can't do? The answer, quite obviously, is no. The best part is that she juggles all of these incredibly important roles with such charisma and ease that it almost makes you feel as though you yourself can tackle the world with such effortlessness, too. But don't go thinking that Daddario is all work and no play — if I've learned anything from speaking with her, it's the exact opposite. Believe me when I say that I think you'll want to hear Alexandra Daddario's hilarious Baywatch set story and her favorite red carpet fashion fail. Trust.

Working in Hollywood, you need to be exceedingly good at what you do to get noticed. And let's face it: You don't get to work with actors like Zac Efron, Kate Upton, and Henry Cavill if your acting chops are only mediocre at best. Fortunately for Daddario, her capabilities were showcased to the world while working alongside Zac Efron and The Rock in 2017's Baywatch.

When asked if there have been any funny on-set moments between herself and her onscreen romantic interest, Zac Efron, I could tell there were a few. "I think we all worked out so much on that film where there were moments that we got too carried away," she says. "They’d be rolling the camera and we’d be doing pushups like, right before the scene to get pumped up ... And you stand up to say your lines but you realize you’ve overdone it and you’re out of breath and you just have to cut and start again," Daddario says with a laugh. "That was always funny balancing like, “OK, at what point do we stop working out?” It got a little carried away."

But those pushups paid off, because they made the pair look like this onscreen:

But working with those A-list celebs must be daunting, right? Daddario fully understands what it feels like to meet a talented cast-mate for the first time, and the nerves that often come along with that introduction. "I think I get a little starstruck in one way or another when I’m first meeting these people because I really admire them and what they’ve done and what they’ve achieved," she says. "I feel really grateful and excited to work with these people. I’m fascinated and I want to learn as much as possible."

This brings Daddario to tell me about the first time that she was introduced to my boyfriend, The Rock (Dwayne Johnson). "I think, you know, with Dwayne, it’s impossible not to be starstruck with him. And I think you step into meeting him and you think one thing, and then he’s so disarmingly kind and nice, and that almost throws you off because you’re expecting to be so nervous and shaky," she says. "But then you get in there and all of a sudden, he puts you completely at ease."

I mean, does it even surprise you that The Rock in real life is just as impossibly sweet as he always seems onscreen?

My boyfriend is just the best, you guys.

And, with a schedule as jam-packed as Daddario's — pushups and all — it can be difficult to imagine that there is any free time for her to do even the simplest of tasks. I myself *barely* have time to run a sponge over my countertop, and I am decidedly not an actress who's starred in countless blockbusters. It seems almost silly to think that she'd have a spare moment to do anything around the house, but if there's one thing I learned about Daddario, it's that she is very much a do-it-yourself kind of girl. And, just like the rest of us, Daddario openly admits that she's fallen victim to her share of DIY fails (Pinterest has truly made fools of us all).

"I just bought a house, so I was trying to save money and do things myself and be handy, and there have been multiple disasters ... I’ve discovered that I’m not handy at all," Daddario says with a laugh.

I think that a lot about life is trying things, doing things differently, getting your hands dirty, and sort of making mistakes.

And there's something else Daddario has no problem revealing that she needs a little bit of help with: dressing herself up, particularly for red carpet events. "I’m sort of a tomboy. I’m from New York City, and I definitely grew up dressing just for convenience and not for fashion for whatever reason," she admits. "Acting was always my passion, but once I made it to L.A. and started doing red carpets, there were some growing pains, and I think that a lot about life is trying things, doing things differently, getting your hands dirty, and sort of making mistakes."

Daddario credits her stylists and her hair and makeup artists who helped to educate her about fashion and what's appropriate for red carpet events. But looking back, Daddario reveals that there was one red carpet outfit in particular that she regrets wearing.

"I love Vivian Westwood, but I wore this Vivian Westwood outfit at the Billboard Awards last year while I was promoting Baywatch and there was a zipper on the side of it," Daddario says. "And I thought that, because it was a music event, that I should just unzip the zipper WAY up high so you could see my hip bone. Like I thought that that was cool, like Lady Gaga or something, but I was trying to be something that I wasn’t, you know what I mean?"

I'm sure my opinion doesn't matter at this point, but I would like to state for the record that I think this ~lewk~ is slammin' and Daddario is clearly not giving her hip bones enough credit.

I think that I’m very genuine, and there’s a way to cultivate a certain image, but I think that being genuine is the only way I really know how to be.

Switching gears from the red carpet to her personal life, I asked Daddario — who consistently dishes out hilarious and witty posts on social media — if her online persona is similar to her real-life one. "Yes, I think I’m very genuine, and there’s a way to cultivate a certain image, but I think that being genuine is the only way I really know how to be," she says.

"So, everything that you see — I love my dog, I do a ton of yoga, I’m traveling and I get to see really cool parts of the world — I’m just excited to be in a place where I have a platform to help people. I’m working with the Elizabeth Taylor AIDS Foundation and Nothing But Nets, and I partnered with them in order to help raise money for two causes that I really believe in. That’s a really exciting thing that I genuinely believe in, so I’d say that that’s a very authentic part of me."

Daddario has also partnered with Kleenex Wet Wipes, a product that she truly believes in, because it was an organic pairing for her based off of her daily life. "I think because we’re all young and we're running around and busy, that’s the world we live in — and you need as much help as you can get."

Currently, Daddario has been working on the films NOMIS and We Have Always Lived In The Castle — the latter, a role that has been her favorite to date. "I felt like I grew a lot as an actor and as a human being on that film," she says, adding, "It was sort of a huge passion project for me."

I’m excited to be moving forward and seeing the way that, not just Hollywood, but the world is changing as I sort of try to enter that space so that I can empower others.

She also tells me that in the future, she aspires to get into the world of producing. "I think that what’s going on in Hollywood and in the world right now with women is really exciting. We’re empowering ourselves in the workplace, financially, and in our lives, and the ability to speak up I think is a huge time for change," she says. "So I’m excited to be moving forward and seeing the way that, not just Hollywood, but the world is changing as I sort of try to enter that space so that I can empower others."

More like this
Lil Huddy's "America's Sweetheart" Is About Charli D'Amelio, & He Admits It – EXCLUSIVE
By Brandy Robidoux
Gottmik Has Already Made 'RuPaul’s Drag Race' History, Win Or Lose — EXCLUSIVE
By Jonathan Borge
Sydney Sweeney’s Hint About Cassie In 'Euphoria' Season 2 Will Make You Nervous — EXCLUSIVE
By Abby Monteil
Stay up to date