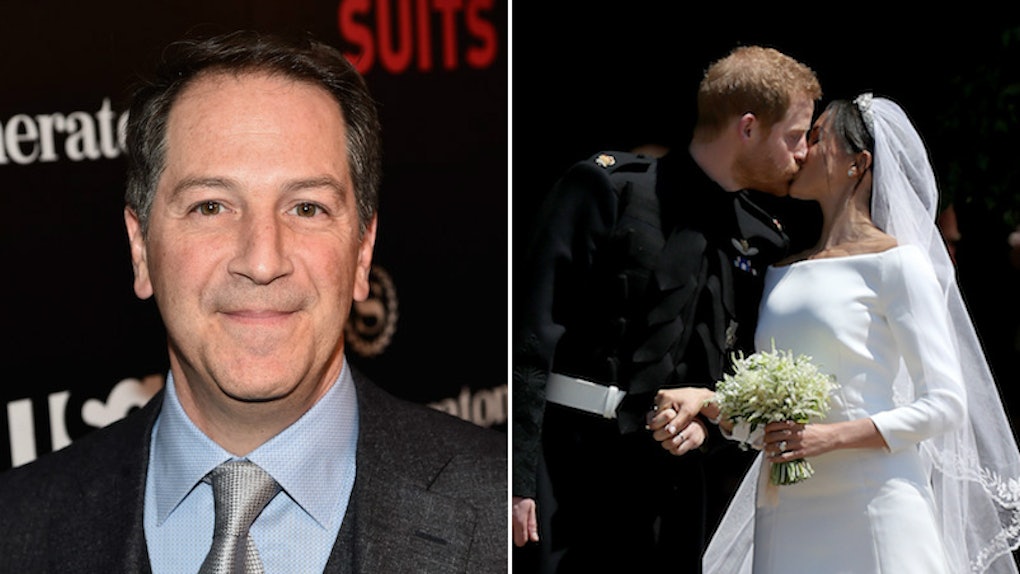 For all of you who are still dreaming about the royal wedding of Meghan Markle and Prince Harry, just know that I am in the exact same boat as you. If you could only imagine what it was like to celebrate the Duke and Duchess of Sussex, then you'll *probably* be pretty amped to hear that Markle's former Suits co-stars not only attended her wedding, but have recently opened up about what it was like for them. (Yes, I am very jealous, but I'm powering through.) But honestly, it's Suits creator Aaron Korsh's comments about Meghan and Harry's wedding that will really make you wish you could have been there for the life-changing event.

While speaking on the NBCUniversal TCA Winter Press Tour panel to promote the USA Network's Suits spinoff show, Pearson, on Jan. 29, the cast reflected on what it was like to attend their co-star's royal wedding. "The thing I’ll say about it is that we all went as a family," creator Aaron Korsh said regarding the ceremony the cast attended in May 2018. "When we all went, there were about 10 of us or something … it was unbelievable. I think it changed our lives in certain ways forever. But if it had never happened, we were a family on Suits for 10 years."

As you should be well aware of by now, Markle previously starred as Rachel Zane, a paralegal, on the show Suits from 2011 to 2017. She left the series before its final season (because, you know, marrying into royalty sort of changes things a bit), but a handful of her former castmates attended her wedding to Prince Harry at Windsor Castle in England, including Sarah Rafferty, Gabriel Macht, Gina Torres, and on-screen love interest Patrick J. Adams.

Yeah, you know the guy.

Mhm. Wonder how Prince Harry feels about this little scene.

In regards to the possibility of Meghan Markle reprising her role before the series finale, Korsh said, "We’re not currently asking Meghan Markle to leave her position with the royal family and join us," adding, "I would love it, but I think it’s pretty close to zero."

But earlier in January, Korsh spoke at length about Markle's former role, telling Deadline, "people come in and out of your life so we’ve always had a mix of new and old and I think we will continue with that hopefully in a satisfying way," adding that, "as of this minute, I don’t know which of our old original cast will be back and which won’t because we’re so early in the season."

Sort of a bummer, but understandable. Korsh also debunked the rumors about Markle's return, saying,

I can tell you that those things in the papers [about donating toward Markle's appearance], I have no idea what they’re talking about. I have not arranged for millions of dollars to be donated to anything on behalf of anyone... we’re so early in the season that we haven’t formulated what we want to do, so we can’t reach out to people before we know what we want to do.

Sigh. Look, I'm not saying that a now-pregnant Meghan Markle should drop everything she's doing to reprise her role...but I truly don't think fans would be bummed about it, either. Just sayin'.

More like this
Meghan Markle & Prince Harry's Beef With The British Tabloids, Explained
By Brandy Robidoux
The 'Glee' Cast's Tribute To Naya Rivera At The 2021 GLAAD Media Awards Was So Moving
By Abby Monteil
Meghan & Harry's Statement About Prince Philip's Death Is Simple, But Moving
By Sydney N. Sweeney
Stay up to date