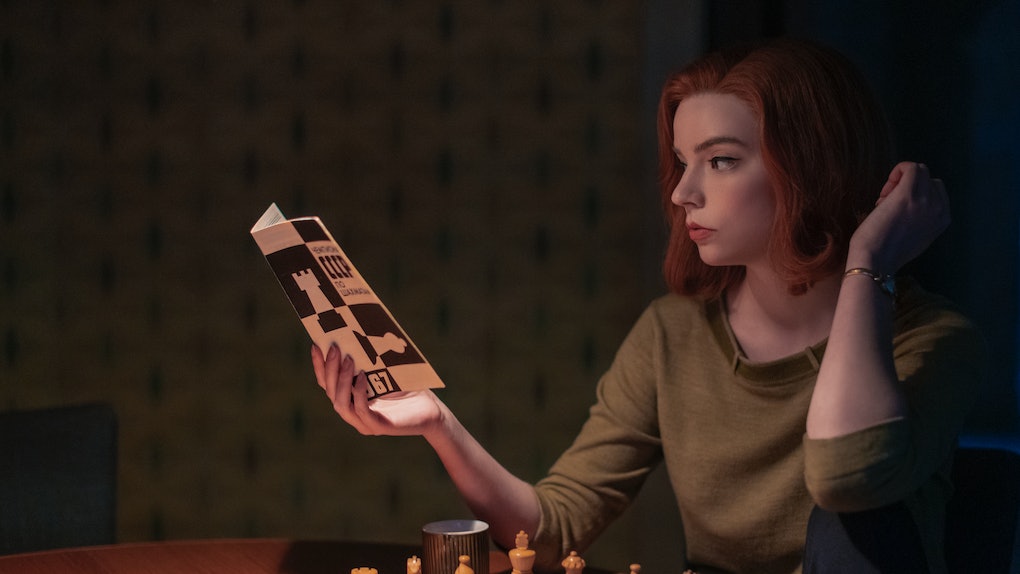 A 'The Queen's Gambit' Musical Is Happening, So Get Ready For Beth To Sing

It took decades and multiple tries to bring Walter Tevis' novel The Queen's Gambit to the screen. But once Netflix's adaptation arrived in October 2020, the story was a smash hit. Although many audiences were surprised to be so drawn in by a story about chess, of all things, the subject matter — alongside the characters and visual storytelling — was riveting. Now, thanks to all the success, a The Queen's Gambit musical is happening, meaning Beth Harmon's story will be told through yet another medium.

It won't be the first time Tevis' work has been adapted for live audiences. His novel The Man Who Fell to Earth, famous for starring singer David Bowie in the film adaptation, was also turned into a musical. Renamed Lazarus, the show opened off Broadway in 2015 with Bowie as the composer. The musical sold out instantly and was extended several times. Since it opened, several international productions of it have been mounted, including in London.

Lazarus' success and the household-name status of The Queen's Gambit seem to have inspired Broadway producers to try another theatrical adaptation. According to Variety, Level Forward, which produced hit stage shows like Jagged Little Pill and the revamped Oklahoma!, have acquired the stage rights to Tevis' The Queen's Gambit novel.

With Netflix's version of The Queen's Gambit currently on an awards run — picking up 2021 Golden Globes wins for Best Television Limited Series and Best Actress for Anya Taylor-Joy — this announcement lands at a pretty timely moment. As Broadway eyes reopenings in the next year following coronavirus shutdowns, there will probably be a rush for theater-lovers to go to shows, and mounting a recognizable title like this is a way to bring in audiences.

But even so, The Queen's Gambit still sounds like a bit of an odd choice for a stage musical. Beth doesn't seem like the type to break into song, and chess is not exactly the stuff to inspire musical dance numbers. (Except, of course, in the smash-hit musical, Chess, about a Cold War-era chess game between the United States and Russia.) One might say something similar about The Man Who Fell To Earth, but that had the advantage of Bowie's attachment following the 1976 film. Anya Taylor-Joy is not known as a singer (although it should be noted she turned down a Disney contract, so she could have a hidden vocal talent), nor has she been announced as part of the musical in any way.

In fact, as of March 9, no talent at all has been announced for the new The Queen's Gambit project. Until any more details are revealed, musical fans will have to content themselves with re-watching The Queen's Gambit on Netflix... or listening to the songs from Chess, if you're feeling that vibe.

More like this
The Soundtrack For Netflix's 'The Irregulars' Season 1 Is Such A Vibe
By Ani Bundel
These Fake 'Riverdale' Brand Names Are Even Better Than The Real Thing
By Rachel Varina
'The Crown' Season 5: Netflix Release Date, Cast, Plot, & More Details
By Ani Bundel
Stay up to date