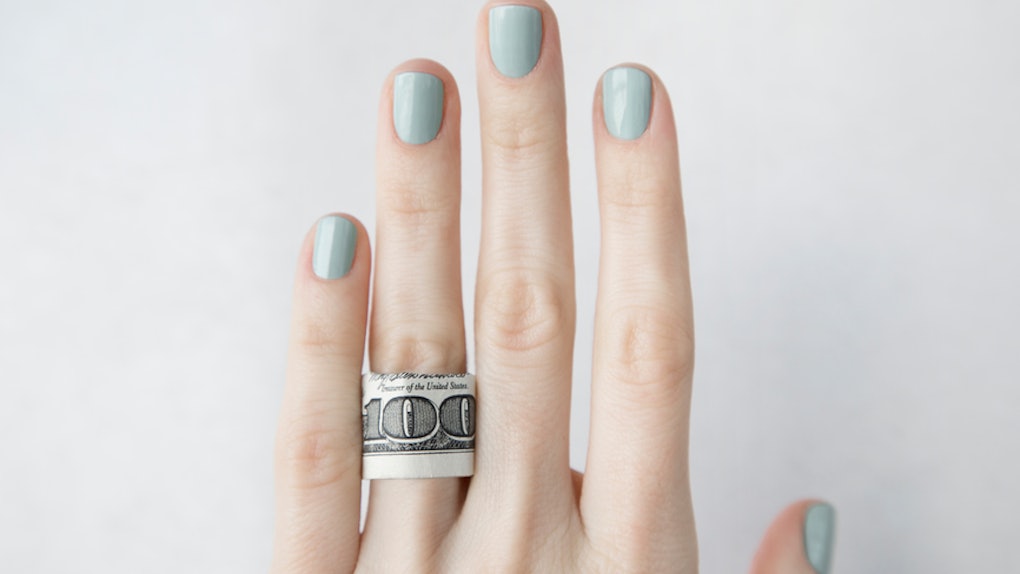 If you have ever said money doesn't really matter to you when it comes to romantic relationships, you may be on to something. There is new evidence to support the claim that millennials value true love over financial security. Digital wealth management company Personal Capital recently conducted a study about money and love, and the results might surprise you.

Which begs the question: When millennial women consider potential matches on dating apps, do they filter out individuals who have low-paying jobs or who look like they don't make much money? I spoke to two women who met their current partners on dating apps. The first woman openly admits she took men's jobs into account when swiping right or left, while the other chose her matches based on the belief that love is more important than money. Here's what they each had to say.

For this girl, it's heart eyes over dollar signs.

I occasionally look at their job if it's a good one and I am impressed, but I don't judge based on it and I don't actively look for that. I think love is more important than money. I don't go on dating apps to find the guy with the most dollar signs; I look for someone I think I would have fun with (and who I am attracted to).

It was important for this girl to date someone with an established career.

I 100 percent took jobs into account when swiping right or left. My friends and I were so tired of — for lack of a better word — losers on [dating apps] that we even [used a sugar baby dating site] in hopes of finding a 30- or 40-something boyfriend with a stable job who wouldn't make us Venmo him for our first date. I know it sounds gold digger-ish... maybe it was/is, but honestly, dating sucks and we were willing to try any and all 'dating services' that would allow us to meet an actual grown man, and not some 27-year-old guy who was still living with his parents and 'figuring things out.'

Ellen may be in the minority (at least as far as Personal Capital's findings are concerned), but her choice is a valid one. Regardless of what your heart tells you, the stressful reality is that money troubles can put a big strain on your romantic relationships. Michelle Brownstein, Vice President of Private Client Services at Personal Capital, says that it's important to talk about finances with your partner early on in a relationship.

"While financial security shouldn't be the number one quality you seek, financial stability and compatibility are important qualities that should be considered when entering a relationship. Even the strongest romantic bond will be tested by financial realities. Understanding your partner's financial priorities, coupled with open and honest dialogue, are important factors in the long run," she says.

Millennials tend to blame their financial woes on the economic choices made during their parents' generation, so it's comforting to know that they are still optimists at heart. Say what you will about the "jaded" millennial generation, but just know that millennials aren't so jaded that they no longer believe in the value of love.