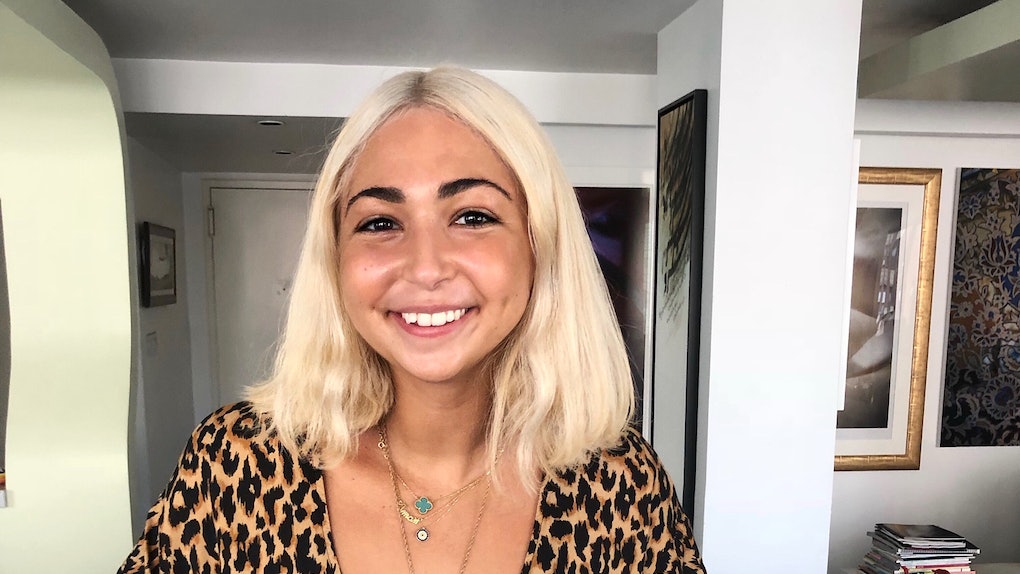 Gather round, kids, I have a spooky story for you! There's nothing more scary than an awkward dating story, and this one will leave you feeling particularly unsettled. It's about a ghost who haunted potential love interests online, but avoided meeting their eyes IRL. In other words, a stranger asked me on a date in a very eerie way, and years later, I'm still shooketh.

There's no escaping the fact that technology has changed the landscape of our social lives — from our means of communication, to who and how we date. Dating apps have transformed the ways in which we meet and get to know potential love interests and hookups. FaceTime has led viral relationships to feel just as face-to-face as hanging out IRL. We can now make dinner reservations online for a table for two as easily as we can brush our teeth. Flirting is facilitated and gratification is instant. I am essentially a walking case study for millennial behavior.

Throughout the age of our digital revolution, however, one thing has remained rather sacred: If you want to ask someone on a date, you've actually got to muster up the confidence and courage to do it — whether that means via text, Tinder, or even (gasp) IRL. In order to go from interacting via screen to physically seeing someone right in front of your very eyes, you have to — wait for it — use your words. An example: "Do you want to hang out this weekend and look at some moth memes?" Flawless execution.

If you defer from this sacred oath, you run the risk of freaking your potential romantic interest out. I, myself, have both been the victim of such reckless abandonment, and engaged in the same rituals — AKA, I rely heavily on the internet and social media! In this day and age, its allure is difficult to resist.

In October of my freshman year of college, a newly made friend suggested we stop by her home friend's apartment on our way to an underclassmen bar night. He was a year older than us, and lived with three friends (I remember one of them looked suspiciously old, maybe in his 80s. That's besides the point). We arrived and immediately set up shop on their beer-stained couch. Our host sat next to me, and we chatted a bit about my first few weeks at school. We discovered we were both Persian, so we discussed our favorite dishes, weird customs, and other shared cultural experiences. It was fun! My friend and I left shortly after for our event, without exchanging any numbers or last names. I didn't think much of it.

For the next week or so, my friend would tease me, saying that the guy I'd met that night had fallen in love with me — entirely based upon the conversation we'd shared. I'd brush off her jokes, believing them to be trivial and lighthearted, and the entire interaction to be completely civil and platonic. So when, I saw that the boy I had met that night had friended me on Facebook, I accepted without thinking twice. Not to brag, but I had, like, 1,000 Facebook friends at the time. I gladly welcomed him to the fold! But I never could have predicted what followed his request.

Curious, I clicked into a new notification, an event titled "Dinner At My House." I had been invited by my brand new Facebook friend. Flattered that I had been invited to an upperclassmen dinner party, I went to RSVP yes — but something stopped me in my tracks. I was the only person on the guest list. I scrolled up to the description. It read, "I'll cook you dinner at my house on Friday." I refreshed the event, thinking perhaps I had just been the first person to be invited. Nothing changed. I felt sufficiently confused, and slightly weirded out.

Concluding that this was, somehow, this guy's method of asking me out on a date, I pondered how to proceed. He had seemed perfectly normal in person, and a homemade meal was certainly preferable to the cafeteria food I had grown accustomed to. But he was a virtual stranger! We had only met once, for a maximum of 20 minutes. Surely he didn't think the way to woo me was via Facebook invite! Uncertain of my next move, I hesitantly selected "Maybe" as my RSVP. Yikes.

Over the course of the next week, I received lots of conflicting advice from my friends and classmates on how to proceed. One told me that the gesture was utterly romantic and that I had to say yes. Another confirmed my suspicion that the virtual interaction was creepy and that I should decline ASAP. My mother was all like, "He's Persian? Maybe he'll propose! You've got to go!" But it was my date himself who sealed his own fate — one day that same week, I passed him on the way to class, and he couldn't even make eye contact with me! His lack of confidence IRL startled me, and gave way to a certain gut feeling: This was a bad idea. So I RSVP'd "Can't Go," and was immediately met with guilt. The sight of "0 attending" on my screen still makes me cringe to this day.

Over the course of that year, my almost-date and I got to know each other better, even becoming friends before graduating school and going our separate ways. We continue to remain cordial through our mutual acquaintances. The invitation is something we can now both laugh at, and speak openly about. But let me be clear — it was never the Facebook invite that perplexed me. It was the fact that his IRL demeanor and his online persona didn't match up. He was moonlighting as two different people! And with Halloween approaching, no one needs a Jekyll and Hyde in their lives.

So this Halloween, consider my advice: If you truly have feelings for someone, don't just haunt them online. Introduce yourself! Use your words in addition to your thumbs.