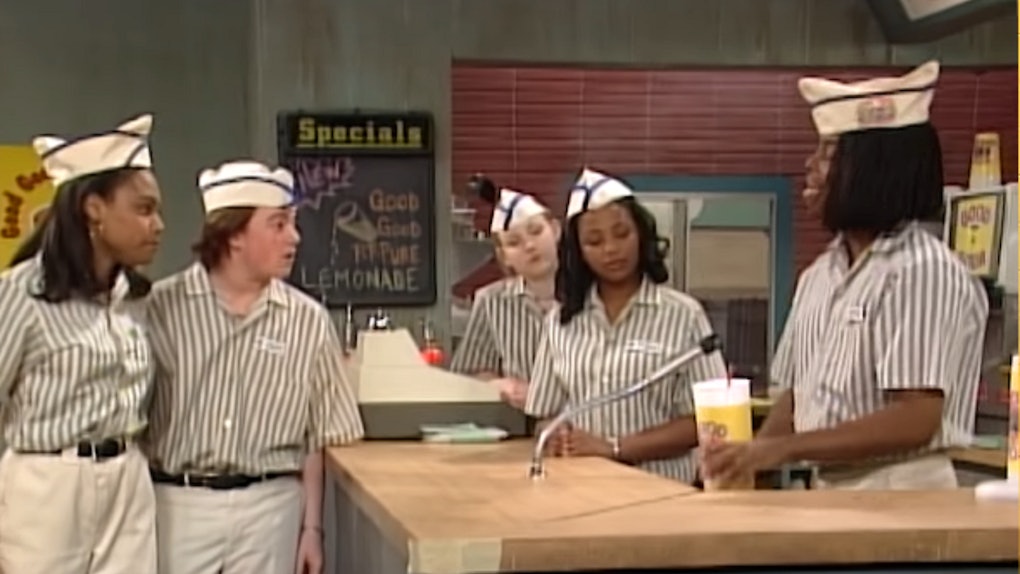 When it comes to fictional eateries from childhood TV, none sounded more appealing to me than All That's Good Burger. Appearing in a series of sketches throughout the comedy show and even inspiring a movie, the Good Burger concept always had me craving burgers and fries, and if you're in the same boat, get ready. A Good Burger pop-up restaurant will open to celebrate the All That revival, so excuse me while I prepare for them to finally take my order.

Debuting in 1994, the sketch comedy series All That birthed plenty of iconic sketches and characters, but the sketches about Good Burger, home of the Good Burger, have a special place in viewers' hearts. The popularity of the fictional fast food restaurant even led to a 1997 movie starring Kel Mitchell as cashier Ed and Kenan Thompson as new Good Burger employee Dexter. As Nickelodeon is launching its All That revival on June 15, my nostalgia is definitely overflowing right now, but Nickelodeon has blessed fans even more with its plan for a Good Burger pop-up.

Entertainment Weekly reports that Nickelodeon and the team that created a Saved By the Bell-inspired diner in 2016 will partner to produce a pop-up Good Burger shop in Los Angeles. Ahead of the restaurant's July 10 opening, interested fans can purchase tickets to the limited-time experience starting on Monday, June 17 at 10 a.m. PT.

In a video message promoting the pop-up, Mitchell promises that in addition to Good Burger's signature dish, fans may buy Good Chunks and Good Shakes. The restaurant will also offer photo opportunities and Good Burger merchandise to help you remember the experience, while games will also be available on site. There are no hints as to whether any original All That cast members will stop by, but seeing as Mitchell and Thompson are executive producing the revival, I wouldn't rule out guest appearances just yet.

Speaking of guest stars, Mitchell will join original cast members Josh Server and Lori Beth Denberg on the premiere of the revival. Because of his contract with Saturday Night Live, Thompson is expected to only appear as himself rather than former All That characters. While their prime era doesn't quite align with that of All That, the Jonas Brothers will also appear on the premiere as musical guests. Viewers can anticipate brand new sketches and the return of skits such as "Good Burger" and "Loud Librarian," which will feature old stars alongside some of the show's new talent. According to a Nickelodeon press release, the All That revival will also include guest performances from artists Daddy Yankee, Ally Brooke, and Kane Brown.

Ranging from 12 to 15 years old, the new All That cast has a heavy legacy to live up to, but with the original series' comedy veterans at their side, here's hoping that their first show ignites a new Nickelodeon generation of laughs. These cast members definitely deserve a Good Burger or two as they continue the All That tradition.

The revival of All That premieres at 8:30 p.m. ET on Saturday, June 15, on Nickelodeon. The Good Burger pop-up restaurant opens in West Hollywood, California, on Wednesday, July 10.