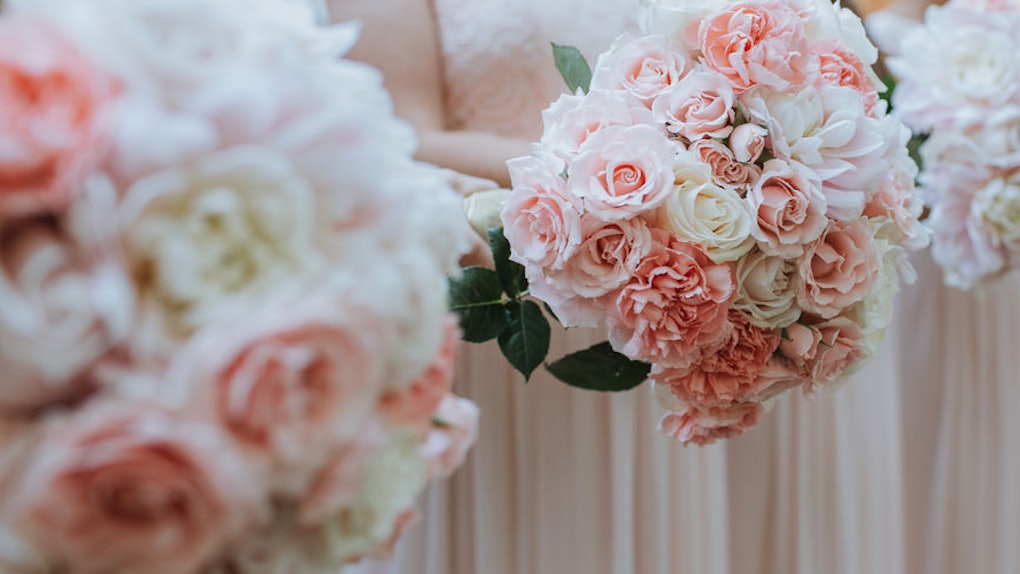 A Bridesmaid Got Kicked Out Of Her Sister’s Wedding Over A Haircut, & People Have Opinions

It's no surprise that the days leading up to your wedding can be stressful. You want everything to be perfect — from your walk down the aisle to your bridesmaids' appearances — and if any little thing goes slightly wrong, it may seem like the end of the world. The need for that perfection may even cause some brides to do things they wouldn't normally do, like remove a family member from their bridal party. Such was the case when a bridesmaid got kicked out of her sister’s wedding over a haircut that the bride apparently knew about beforehand and was OK with, and I'm confused... to say the least.

"So my sister is getting married in like a week and a half, and I'm a bridesmaid," Reddit user anonaccount623 wrote in the r/bridezillas thread. "When she chose her bridesmaids, she stated she would rather us not have unnatural colored hair, just in case it clashes with her dresses (a little dumb but still pretty understandable), but other than that, she didn't care what we did."

Taking her sister's word, the bridesmaid decided to cut her "lower-back-hitting hair" and donate the 14 inches she cut off. Sweet, right? The bride thought so, too! But when she sent a picture of her new 'do to her family group chat, the bride changed her mind.

"My sister immediately said, 'Oh my god, why would you do this right before my wedding?' And today told me I had to get extensions or I was out of her wedding," the bridesmaid continued. "I told her I wouldn’t be paying to get extensions and to just leave me out of the wedding if she's going to be that angry over my haircut." On a separate note, the user pointed out that she's a pale redhead, and her sister's bridesmaids' dresses are neon orange. "So, I already look like sh*t," she wrote. "Not that that matters. I'm just irritated."

The user ended her post by saying she knows how stressful a wedding can be, but that she would never go the lengths that her sister did. "I am married, I had a wedding," she explained. "And I would never dream of being angry at my sibling for cutting her hair." (Especially when you ran it by your sibling first and they "responded positively"!)

While it's normal for a bride to be stressed out about every wedding detail as the special day gets closer, Reddit users sided with the bridesmaid in this situation. "Your hair is fine and I actually like it better short. It look[s] healthy and pretty. She’s being an idiot. If it were me I would just let her kick me out of the wedding, show up in a beautiful dress of my choosing and look like a knockout," user bltrvns9 commented on the post.

Another one pointed out that the bride was fine with it at first, so it's not the bridesmaid's fault. "She stated she didn't have a problem, so her reaction is all on her," To_Go_Back1984 wrote. "So let her kick you out (especially since you aren't a big fan of the dress) and know in a couple of years she will regret this decision."

One user even gave the bride the benefit of the doubt, which was nice, considering most of the replies bashed her pretty harshly. "Sounds like wedding stress is getting to her," snflwrchick started their comment. "Hopefully you can talk it over again soon, maybe with a friend or parent involved to help. Your hair is awesome and once she calms down from the shock, it will be OK."

Wedding days can be overwhelming, and it's clear this bride was particularly amped up and worried about everything being absolutely perfect on her special day, which makes sense. She may not even realize that threatening to kick her sister out of her wedding party for a haircut may be a little much. Hopefully snflwrchick is right; once the bride calms down, it will be OK, and her sister will walk down the aisle with the other bridesmaids, in their (beautiful?) neon orange dresses.