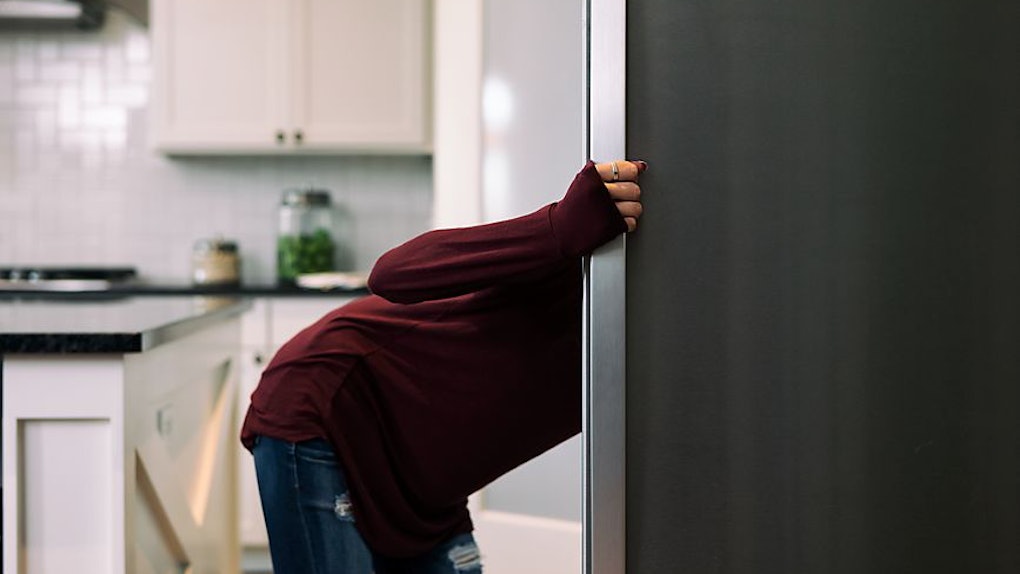 If you’re going from wolfing down meat and potato dishes on the reg to a strictly veg-only menu overnight, don't expect that your mouth is never going to water at the sight of a bacon cheeseburger again, or that the smell of roast chicken won’t entice you. Odds are, if you’re a carnivore-turned-herbivore, once in a blue moon, your body is going to crave animal products. This absolutely does not mean you have to give in to the hunger, though. There are plenty of life hacks for vegans when cravings strike. Thankfully, the food industry is slowly chugging away to offer plant-based peeps some alternatives that come eerily close to the real thing.

Coming from a predominantly Irish household myself, I consumed chicken, burgers, hot dogs, chopped meat, bacon (so much bacon), and drank tea with milk on the daily. Switching over to a vegetarian diet cold turkey for the sake of my sensitive tummy was no small feat, and I can totally relate to those of you who, once in a while, find yourself glancing at a family member’s dinner plate, or wishing McDonald’s could somehow mimic their chicken selects vegan-style because they're just that tasty. Rest assured though, the food industry is (slowly but surely) working on it.

Progressive food development has made it possible for vegans to have their burgers and eggs, and save the planet, too. More often than not, meat-eaters go plant-based because of health and moral issues, not because they didn't enjoy the taste of animal products. It's not uncommon to crave the foods you used to eat, but rather than take two steps back, take three steps forward by substituting meat for these delicious alternatives instead.

It's also ridiculously good for you. A lot of meat substitutes are made from soy, which, as you may already know, is a controversial topic because it contains phytoestrogens, which mimics estrogen in the body. Beyond Beef, however, is made up of 100 percent pea protein, and it's the first plant-based burger patty to be sold in the actual meat section of grocery stores.

Unfortunately, it's not available for purchase online, but it can be found in select Whole Foods, Dillons, and Kroger locations, as well as a few other stores around the country.

If you grew up watching The Amanda Show, you may remember a humorous skit entitled "The Girls Room," in which the character Debbie professed her love for eggs in every single episode. That is me IRL. I am Debbie, y'all, and I like eggs — a lot. So much so that if I was forced to only eat the stuff for breakfast, lunch, and dinner, I'd be perfectly content.

Now that that's out in the open, you can fully trust my judgment on Follow Your Heart's plant-based replacer, because oh my goodness, guys, this stuff is the real deal. The VeganEgg tastes more egg-like than some of the ones chickens produce.

Take two hearty tablespoons of the stuff and mix in half a cup of water until thick. Pour it over a warm skillet, and you've got yourself a breakfast scramble. It even works as a substitute in baking recipes!

Wings were another really tough finger food for me to give up when I went veg, but I eventually realized it wasn't so much the actual chicken protein that I missed, it was the satisfying crunch of the breading and finger-licking zest of the buffalo sauce.

If you're also a fan of this bar food staple, SweetPotatoSoul's recipe is sure to curb your cravings and then some. Inspired by southern friend chicken, Jenné Claiborne's recipe calls for some deep-fried cauliflower seasoned with goods like salt, cayenne pepper, onion powder, garlic powder, Old Bay seasoning, and nutritional yeast.

The secret, Claiborne says, is to coat the cauliflower twice so you really get that traditional crunch and, of course, douse those suckers in your favorite hot sauce.

4. A Beef Substitute From Scratch

When you feel like experimenting in the kitchen, consider Better Homes and Garden's delicious meatless lentil burger if you've got a hankering for beef.

I've tried a few homemade veggie burger recipes in hopes to find one that has a similar texture and taste to chopped meat, and while they've all turned out tasty, this one has me and my husband sold.

The recipe is simple, and only calls for a few ingredients like lentils, arugula, sweet potato, and mushroom. Once you nail down a substitute for chopped meat you actually like, you can use the plant-based patties in salads, sandwiches, and even as taco meat.

I married an Italian, so naturally, meatballs are a must in our household. Trader Joe's plant-based alternative is a decent option, in my opinion, and is made from soy.

It tastes delicious as a solo dish covered in tomato sauce with a side of rice or veggies. You can add them over pasta or on a sub, and I'd definitely suggest adding a few to salads for a protein boost.

I definitely think switching from plain cow's milk to unsweetened original almond milk can be somewhat of a difficult transition for your taste buds because the flavoring is very different. Chocolate almond milk, though, is a different story.

Blue Diamond's chocolate drink feels like silk on your tongue. It comes sweetened, or unsweetened, and it's 100 percent soy and lactose free so it's easily digestible on sensitive stomachs. An indulgence without the guilt of harming cows or risk of stomach ache? Yes, please.

I wholeheartedly believe that no food can solve emotional distress quite like a good cheese sauce. Unfortunately, another comfort food that often gets negated when someone goes full vegan is every college kid's staple comfort: macaroni and cheese.

Seriously, thank goodness for Annie's line of vegan shells and cream sauces. Each batch is made from pumpkin, sweet potatoes, and a lot of spices that, when combined, exceed expectations. Who says you need dairy to make cheese? Plant-based is pushing boundaries and I am here for it.

We need something to spread over our everything bagels in the morning, amirite? Giving up cream cheese is a struggle, especially on Saturday mornings when a nice warm bagel and large cup of coffee is luring you into your favorite shop. Those large tubs of flavored cream cheese are tempting AF, but Kite Hill has our back, friends.

The brand has launched a few almond milk substitutes like plain and chive, but trust me when I say that this jalapeno flavor is a breakfast game-changer. They are hard to come by though, so make sure you scout out stores like Whole Foods, Shoprite, and Fairway and stock up when the opportunity presents itself.

No dairy? No problem. Alter Eco chocolate bars and truffles are some of my favorite organic treats, and this dark salted almond bar just so happens to be vegan-friendly as well.

These are especially great for people who can't ever decide between salty or sweet. The ingredients list contains all of four ingredients, it's healthy, and all are fair trade-certified, meaning even though it feels like a treat (and it is), each bite is actually very good for you.

More like this
7 Wine Delivery Gifts To Send For Mother's Day To Make Mom Feel Special
By Marisa Casciano
The TikTok Recipe You Should Try, Based On Your Zodiac Sign
By Chelsea Jackson
7 TikTok Recipes Using Ramen To Make Lasagna, Pizza, Smoothies, & More Treats
By Kelly Pau
Stay up to date