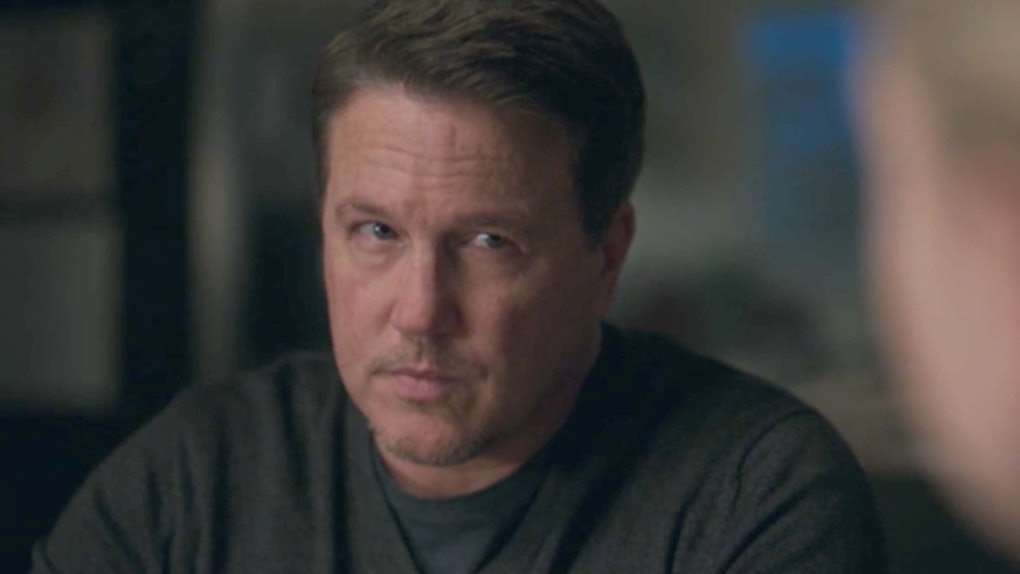 The Black Hood is at is again on Riverdale, except now it seems like we are finally about to get some real answers about the town's "angel of death." At the tail end of last week's episode, we see Betty begin to suspect her father Hal Cooper of being the man behind the Black Hood mask, and this week, she launches a full investigation into the theory that fans have been screaming about for months. At long last, all the clues that Hal Cooper is the Black Hood on Riverdale are adding up, and with the Season 2 finale just two episodes away, all signs seem to point to Betty's dad.

Spoiler alert: This post will include details from Riverdale Season 2 Episode 20, "Shadow of a Doubt." The latest episode of Riverdale gave us tons of new clues that point to Hal Cooper secretly being the Black Hood... and also one scene that seems to disprove the theory. Towards the end of the episode, the Black Hood appears during Fred Andrews and Hermione Lodge's mayoral debate to shoot up town hall, and for the first time, we see Hal Cooper in the same place as the Black Hood. Yes, that may seems like a major wrench in the theory, but it really is not enough to disprove anything, since a lot of evidence has been suggesting that there are multiple Black Hoods working together to "cleanse" Riverdale. Hal may have known that Betty was starting to suspect him, and had his fellow Black Hood pop up at town hall while he and Betty were there together to throw suspicion off himself. (See clue number 9 below for more on how Hal might have staged that).

Really, it still seems like there are way more clues reaffirming the Hal Cooper theory than anything substantially disproving it. As we head towards the Season 2 finale on May 16 — which will likely include the Black Hood's unmasking — let's go over all the clues that point to Hal Cooper being the man under that mask:

The very first clue that made Hal Cooper one of the main Black Hood suspects was purely the fact that he is one of the few characters on the show who resembles the killer. The Black Hood is a middle-aged man who has green eyes, just like Hal. Only a couple other characters match that description — namely, Sheriff Keller and Smithers — but Hal stands out as the prime suspect for other reasons as well.

The other major thing we know about the Black Hood is that he is closely connected to Betty Cooper. He communicates with Betty privately, lets her in on his plans, and seems set on working alongside her as allies. He frequently tells Betty that she and him are one in the same, a sentiment that makes Hal look even more suspicious.

3. The Connection To The Riverdale Register

The Black Hood uses the town's paper, the Riverdale Register, to communicate with the public — and Hal is the co-owner of the paper along with Alice. The Black Hood announces his presence in a note sent to Hal and Alice, which they publish in the paper. Later, he sends an archived Register article to Betty about Alice's spotty past, which seems to be something that someone familiar with the Register's archives would be able to dig up. In the latest episode, Jughead learns that the Register leaked a video that seemed to pin Midge's murder on Fangs Fogarty, a great way for the Black Hood to frame someone else for his killing.

Not only is Hal Cooper always present at public Black Hood attacks, but in the latest episode, Betty also finds out that his schedule really shadily suggests that he was unaccounted for during the private Black Hood attacks. Betty gets her hands on her dad's schedule book, and it lists unspecified meetings and trips on the days when the Black Hood attacked Fred Andrews, Ms. Grundy, Moose and Midge, and the Sugarman. As Cheryl points out, the schedule isn't evidence, but it is corroboration.

But the biggest piece of physical evidence connected Hal Cooper to the Black Hood is the Nancy Drew book that Betty finds in his secret B&B room. Earlier in the season, the Black Hood sent Betty a cypher that she could only solve using a specific Nancy Drew codebreaker book that she loved as a child, and Betty found that exact same book among her dad's things this week. Hal claimed that the book was a present he was saving for his daughter's birthday, but it is hard to chalk it up to coincidence.

7. The Targets, And The People Not Targeted

The only thing that does not fully make sense is what Hal Cooper's motive would be to start killing the town's "sinners." But it is notable that the Black Hood has not attacked anyone who appears to be close to Hal. Fred Andrews, Ms. Grundy, Moose, Midge, and the Sugarman all either have a purely circumstantial connection or no connection at all with Hal, and the Black Hood's latest presumed victim, Chic, is someone whom Hal openly hated. Although the Black Hood has threatened Betty's family on his phone calls with her, he has shown that he definitely will not hurt Betty, and does not seem to want to go after Alice as well.

Finally, we reach the latest development. The new episode ended with the Black Hood on Cheryl Blossom's doorstep, presumably at her house to kill her. Now, Hal has openly hated the Blossom family for the entirety of the series (despite starting a romance with Penelope this season), so it would make sense for Hal to want Cheryl taken care of. Betty also revealed to her dad earlier in the episode that Cheryl was helping her to investigate him. It was a quick moment, but you could hear the confusion and anger in Hal's voice when he reacted: "Cheryl!?"

One last thing before I finish: There actually is another convincing theory that claims Hal Cooper is not necessarily the Black Hood. The show could be ramping up to reveal that Hal Cooper has a twin, and that twin is the real mastermind behind the Black Hood. After all, Hal is a Blossom by blood, and twins are rampant within the Blossom family. This could also explain why Hal was cozying up with Penelope Blossom this season after he spent all of Season 1 vehemently hating all things Blossom — maybe Hal's twin is impersonating him and working with Penelope? It is a definite possibility.