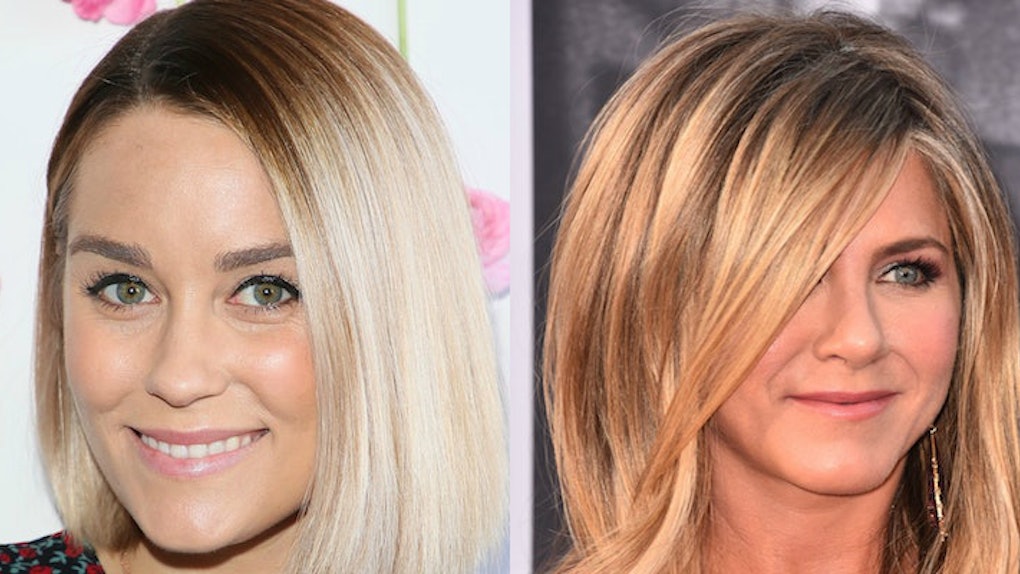 9 Celebrities You Didn't Know Had Tattoos Because They Hide Them So, So Well

For the most part, I can endure a wardrobe malfunction, devastating breakup, or career flop in total privacy. With the exception of a few friends and relatives, no one's really all that interested in the inner workings of my personal life. But the same can't be said for celebs, who are a constant source of entertainment for those that love to love them... and love to hate them. When your every waking move is documented in the gossip mags and scrutinized by the public, you've got to keep some things to yourself. Even if that something is a piece of sentimental ink, or in other cases, a permanent mistake. Whether they're strategic about hiding the design or just into the tiny tat trend, these celebrities you didn't know had tattoos are totally surprising.

Bang Bang Tattoo artist and king of the celeb-approved micro tat Jon Boy told GQ its often these small, intricate designs that carry the most weight:

People think because it’s a small tattoo, it’s not a real tattoo, but some of the smallest tattoos have the most meaning behind them. I go home feeling so drained and exhausted. I feel like I carry the weight of these clients and what they’re going through, whether they’re dealing with a death or whatever it may be. It sticks to me.

Despite her marriage (and later divorce) from the thoroughly inked Justin Theroux, Jen surprised herself when she got her first and only tattoo back in 2011. After her beloved Welsh Corgie-Terrier passed, Aniston paid homage to her late pet by inking his name, Norman, on her foot. Speaking to ET Canada, Jen opened up about the loss and her dedication, saying:

That’s my dog, my baby who just passed away. I never thought that would ever happen. It’s just my way to pay homage to him … forever.

Jason Wahler's was infamous on Laguna Beach and The Hills for toying with our beloved LC's heart, but what went undocumented on the MTV sensation was how permanent Lauren's one-time devotion ran for her co-star. Reality TV's resident good girl had her former man's first initial inked on her stomach. She later had the "J" switched to an "L" after the pair's tumultuous relationship finally came to an end. According to Bustle, she also bears "sticks and stones" and "13-5-22" on her body.

Ben Affleck's sprawling back tattoo is hardly discreet, but given the extent the actor's gone to keep it on the DL, it's definitely a surprise. When photos first surface of the actor's new ink back in 2016, Affleck shot down rumors surrounding the rising phoenix design. "[It's fake for a movie," he told Extra's Mario Lopez. "I actually do have a number of tattoos but I try to have them in places where you don't have to do a lot of cover up. They get sort of addictive, tattoos, after awhile." Totally believable, right? Wrong, because as it turns out, he was apparently lying. Fast forward a few years, and the Batman star was spotted with it once again. After the New Yorker published a piece titled “The Great Sadness of Ben Affleck" which notes his distinctive ink, Affleck shot back (and seemingly confirmed) the tattoo on twitter. "@NewYorker I'm doing just fine. Thick skin bolstered by garish tattoos." Still waiting for an explanation on this one.

Hailey Baldwin is hardly shy about showing off her fresh ink on Instagram, but what might come as a shock, is that Baldwin isn't the owner of just one or two tats, but rather 19. The supermodel and fiancée of Justin Bieber (!!!!) is a notable fan of celebrity tattoo artist Jon Boy, and is often featured on his 'gram sporting a new design. "I think the really little dainty tattoos are very, like, they’re very pretty on girls," she told The Cut. "I think now I’m going to chill out for a second on the tattoos because I’m running out of spots."

Blink and you'll miss it. Seriously. Following in the footsteps of her tatted BFF Hailey Baldwin, Kendall Jenner paid a visit to Jon Boy for a few teeny tiny designs, including her first: a small white dot. Yep. “To her, it’s the little things that matter," Jon Boy revealed. "The white color was because she didn’t want it to show with modeling and all that. It was a fun night." She's since added to the dot, turning it into a full heart on her middle finger. “Even though Kim always says, ‘Don’t put a bumper sticker on a Bentley,’ I really like tattoos,” Jenner said in a since-deleted post to her app.

Notoriously private Saldana is all about keeping her ink on lockdown, too. After copping to 10 tattoos while on David Letterman in 2014, the Guardians of the Galaxy actress admitted she's "running out of private places to put them on." And while Zoe and her even-more-tatted hubby are fans of her body art, someone in the family is not so keen on the permanent designs. "My grandmother says that I look like a newspaper naked," she laughed. According to the New York Daily News, her collection includes the word "heal" in Hebrew under her right breast.

Despite the fact that everyone stopped using the term YOLO a solid 3 years ago, Zac Efron is now and forever sporting a tattoo of the "you only live once" acronym. The phrased was inked in tiny script on his hand back in its peak years, AKA 2011, and he was first spotted with the addition while on a press tour for New Year's Eve. Honestly, don't blame him for flying under the radar with this one. Sorry, Z.

Reese doesn't really strike me as the tattoo type, but lo and behold, the girl's got one. A big one. A bikini-clad Witherspoon was first seen in 2011 with some surprising ink. At the time, a source for Us Weekly revealed that the star design on her tummy was a few years old, but the two adjacent birds were an addition after she wed her former agent and current hubby, Jim Toth. "In some ways, [the star tattoos] kind of symbolized their new life and love together," the source continued. "People consider Reese to be such an All-American sweetheart so it is more unexpected for her to have ink."

Ryan Gosling's role in The Place Beyond the Pines called for a lot of tattoos, but the clean-cut star actually has a few permanent designs. It was reported in 2015 that the ultra-private family man had inked a dedication to his first born, Esmeralda, when he was seen out with "ESME" on his knuckles. But without any further appearances, my guess it was more of a permanent marker situation than an actually permanent thing. The actor does, however, have a few known pieces of body art. "I like when they look bad, but no one will do bad tattoos," he told W Magazine in 2010. "So I did one myself. That’s why it’s bad. I’m waiting to get old — I think old guys with tattoos look good."