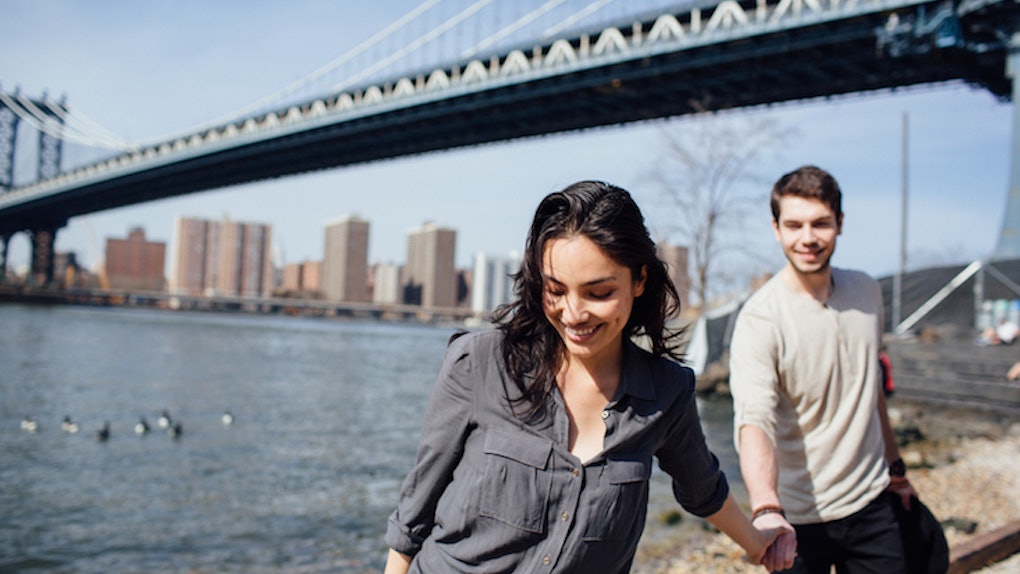 About two years ago, I went on a couples' trip to Tobago, a small Caribbean island that I'd visited every year with my parents when I was younger. It's hands-down one of my favorite places to be in the entire world so when my best friend and I both happened to be in relationships at the same time, I jumped at the chance to go as a foursome. Little did I know, this would be the source of bizarre vacation horror stories I would tell for years to come.

My best friend and my boyfriend shot snide remarks at each other the entire time we were there, making it almost impossible to enjoy group activities. In fact, they waged war on each other long before we even boarded our flight since they both had scheduling conflicts and felt that the other person should have readjusted their plans. To make things worse, my best friend was dating another close friend of mine at the time, putting him in the incredibly awkward position of having to choose sides. By the last day of our trip, no one was on speaking terms and we each sat several feet apart on the beach (yes, I have embarrassing photos to prove it). My best friend and I haven't been in contact since.

Much like my own disastrous island adventure, these eight women's vacation horror stories will definitely have you reconsidering any upcoming travels with your partner.

This is why you should never be afraid to travel alone.

My now-ex tried to cancel a vacation, saying he was worried about me being too stressed. I said I was fine, and I needed the vacation exactly because I had been so stressed. So we went, and it was only when we were out of the country that I realized he had tried to cancel the trip because he was planning to break up with me. To cowardly to do it before the flight, he decided instead to spend a week mostly ignoring me as we went sight-seeing, and making up excuses to avoid any intimacy in the evenings. Then when we got home he dumped me. I wish I could do that week over again and just go on the trip alone.

Luckily, this woman got her romantic trip to France after all.

My first trip to Europe, well the parts I travelled with my boyfriend at the time. Since I was a little kid I had wanted to go to the Louvre and my ex boyfriend complained so much whilst we were there I left way earlier than I wanted as he bummed me out so much and I felt bad about how much he was hating it. I am from Australia and I saved for literally years to go to Europe and see these kinds of things. Now I am much older I would have handled it differently but back then I was much more into trying to appease a boyfriend than stand up for myself. I got to finally go back to the Louvre 13 years later this year though and see it properly (with my husband) :)

Anyway for most of our Europe trip he didn't want to do anything that I found interesting (he just wanted to sit in cafes mostly). I mean everyone has their interests so neither of us is more correct in our interests but I would do stuff he wanted to do without complaining but didn't get the same in return. Just completely incompatible as travellers. He also would get mad at me for ordering the same types of food such as we were in a beer hall in Munich and I found this food called schwäbische käsespätzle which was DELICIOUS so I ate it three nights in a row and on our final night he cracked the sads with me as I was going to get it again so I got something else (some beef stew thing). I can get beef stew easily plus the other stuff on the menu easily back home but not spatzle! Anyway the trip being shit was partly on me too for not standing up for myself but the times I did ended up causing such huge arguments it was easier to just suck it up.

At least, these two were in it together.

I went to New Hampshire in June/July for about a week. My boyfriend and I were having a lovely time and then on our third day we both came down with the flu. The rest of the trip was us laying in bed sleeping because we were too sick to do anything else.

This woman went the distance but was it worth it?

Probably the time I did a whirlwind four day trip to Bali specifically to meet some relatives of my then-boyfriend. I met them for only a few hours and then they left? Also I came down with Hand Foot and Mouth and was miserable the entire time.

This is my nightmare.

Getting explosive diarrhea on a weekend trip with a VERY new boyfriend where u are sharing a tiny one bathroom hotel room with paper thin walls.

My ex decided that it would be great to tell me he didn't love me... at his friend's wedding... a day before my birthday and a week before we were due to go home.

Idk, I didn't handle it very well at all; he was extremely drunk and (allegedly) didn't remember saying it, but I was really confused as to why I had been invited in the first place if that's how he felt about me.

This woman learned a valuable lesson.

It's a tie between my Honeymoon and my first visit to my now-sister-in-law's.

The trip to the SIL happened after we'd been dating about a year. She lived near a major tourist spot.

My husband was content to basically sit on the couch, doing nothing, the whole week we were there. We went to some tourist spot one day, and that was it. The rest of the trip was spent dealing with my SIL talking down to me.

Our Honeymoon shouldn't have been a surprise either. He took no initiative in planning it or offering any opinions. He was happy to spend an hour or two a day doing something, then wanted to sit in the hotel. We didn't spend all that money and time traveling just to sit.

He still talks about how it was the best trip of his life. I just abandon him now to do what I want to do on trips.

This is why you should choose a travel buddy wisely.

I went to Europe with my boyfriend last year. It wasn't my top choice because I've been multiple times and wanted to see something new. A couple days in a started feeling really sick and it only got worse. I can probably tell you how to find every bathroom I used, the details of their interiors and likely little about the landmarks and quaint towns we were visiting. At a couple of points he was having us run around the city across streets full of traffic while I was begging him to stop because I thought I was going to collapse. But he just did understand. He thought I was being dramatic about slight stomach discomfort. The food was wonderful but every meal was absolute agony. My body wasn't holding food down so I was starving but eating only brought pain and undesired physical reactions. I spent 8 or 9 days on vacation like that. Once we got state side I spent 8 days in the hospital, another week at home on bed rest and wasn't fully recovered for another month. I managed to have fun anyway but I never want to experience that again.

The next time you get the urge to jet across the globe with your partner, maybe try a quick weekend getaway first to test things out.