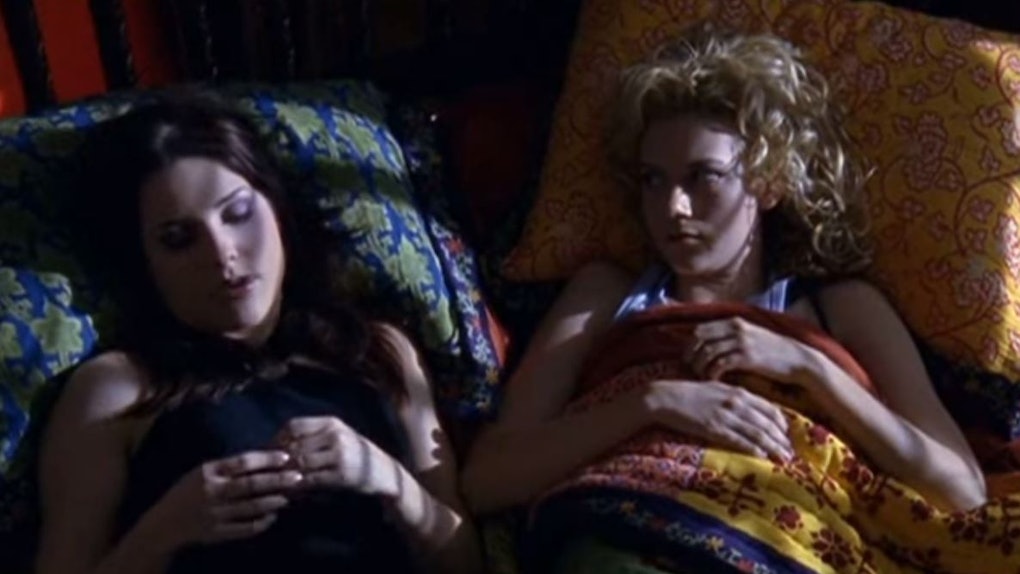 They had their fair share of fights, but Brooke Davis and Peyton Sawyer were always friendship goals on One Tree Hill. I mean, who could really blame them for fighting with total hunk Lucas Scott around all the time. But at the end of the day, "hoes over bros" always came out on top. If you and your best friend watched the show together, there were probably far too many Peyton and Brooke moments from One Tree Hill that made you both say, “same”... at the very same time. You can relate to these characters because your friendship is just as strong and important as theirs.

Hopefully, there's way less drama in your life, but it’s pretty much like you and your bestie live in Tree Hill. Despite the loves triangles, or as Brooke puts it, "rectangle plus one," her and Peyton were always there for each other. You and your BFF are exactly the same. You know you have your disagreements at times, but your friendship always wins out. These eight memorable Brooke and Peyton moments from One Tree Hill could seriously be moments straight from your own life. And the most important thing you and your BFF share with Brooke and Peyton is that you both can be a shoulder to cry on. This will come in handy when you re-watch One Tree Hill together, because oh boy, this show can really hit you in the feels.

1. You Live By The "Hoes Over Bros" Motto

"Hoes over bros" was Peyton and Brooke's go-to. Sure, they let some bros get in the way, but that never stopped them from caring about each other and being there 100 percent. "Hoes over bros" was such a big impact on their friendship that Brooke named her fashion line Clothes Over Bros.

2. You Help Each Other Out, Even If It Breaks Your Heart

Peyton and Brooke fought over Lucas... a lot. It became exhausting seeing these two friends fight over a guy, but one memorable moment from the show was when Peyton revealed to Brooke that Lucas said Brooke was the girl he'd want to be with when his dreams became a reality. Even though it broke Peyton's heart, she put her friend first. You would do the same for your BFF.

3. You Take Day Trips Together

Just like when Brooke and Peyton took Brooke's dad's boat out for the day, you and your BFF go on little adventures together. You go off on weekend trips to fun new places, or just have brunch and go shopping together. No matter what, you're always having fun together.

4. No Matter The Distance, You're There For Each Other

Despite having a successful fashion line in New York, Brooke moves back to Tree Hill to be with Peyton. You and your BFF don't necessarily have to move to a new city be together, but you understand the importance of being there for her, regardless of distance. If you are long-distance, you definitely make plans to visit each other.

5. You Talk To Other People About How Great Your BFF Is

When Peyton makes a video for her baby, because she's not sure if she'll make it, she makes sure to tell her kid about her best friend, Brooke. This scene always gets me. You totally know what it's like to tell someone about your BFF, and how emotional you get talking about how great she is.

6. You Lift Each Other Up

After Brooke was attacked, she circled all her bruises in her mirror and wrote words like "payback" and "retribution." After she reveals to Peyton that she was attacked, Peyton goes in and changes out the words on her mirror to words of encouragement, like "kind" and "beautiful." You are there to help lift your friend up at her weakest time.

7. You'd Risk Your Life For Each Other

When "Psycho Derek" tries to kill Brooke, Peyton risks her own life to save her. Thank God you'll never have to deal with a crazy person like "Psycho Derek," but you and your BFF understand the idea that you'd do anything for your bestie. You'll always be there for her.

8. You Only Fight Because You Care

Peyton and Brooke's biggest fight was an all-out rumble, but they were only fighting because they both cared so much. They let boys get in the way, but even if they weren't talking, they still cared for each other's happiness. You and your bestie will fight, but you will always make up, because your friendship is way too important to lose.