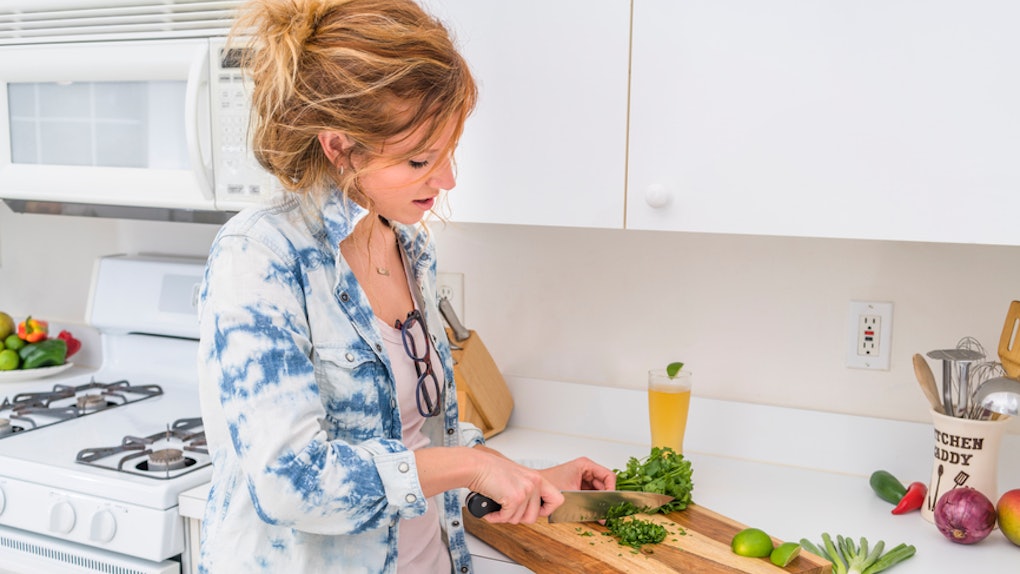 Sometimes being a real, actual adult can be so daunting that doing the bare minimum is the most you can expect of yourself. And by bare-minimum, I mean you've probably had a peanut butter and jelly sandwich for dinner for the last four days in a row. But as it turns out, most fancy cooking hacks are actually way more simple than you think. They not only help you save time, but also help you make the most of what you have. Trust me, there are tons of kitchen hacks you never knew you were missing.

Most of our efforts to cook often end in us wasting food (either because we bought too much, or don't know how to preserve it properly), hurting ourselves (do mild blisters require a trip to the ER?), or just plain disappointing our taste buds. But learning a few quick kitchen hacks can help cut down your grocery bill, as well as reduce the amount of times you open your refrigerator to find that something has developed a pulse. It's a total win-win, not to mention the pure joy you can get from shocking a friend over your borderline professional culinary skills.

PB and J is great and all, but sometimes it's nice to switch things up. Here are eight things you may be doing wrong in the kitchen, along with solutions for how to pretend you actually know what you're doing.

1. Store Your Lemons In A Bowl Of Water Instead Of On A Shelf

If you want to keep lemons from getting moldy, store them in a bowl of water, which will help them keep for up to three months.

2. Cut Your Limes Like Apples Instead Of Into Wedges

If you've been cutting your limes into groups of wedges, you're not getting the juiciest bang for your buck.

Instead, consider cutting your lime as you would an apple, as if the center is the "core," and the external parts are the pieces you want to cut off as a cooking or drink garnish.

3. Remember You Don't Need To Refrigerate Literally Everything

Although the immediate instinct is to throw literally any perishable food into the fridge for maximum lifespan, there are tons of food products that you shouldn't refrigerate, and will actually change on a molecular level if you keep them chilly for too long (read: will start to taste worse).

4. Pour Your Pasta Water Into Your Sauce Recipe Instead Of Down The Drain

That pasta water you drain into the sink actually has more value than you realize.

Believe it or not, pasta water can be an awesome addition to your pasta sauce. Because the liquid is starchy and salty, adding it to your sauce recipe can turn the resulting product into a creamy, cohesive masterpiece.

5. Know The Difference Between Boiling And Simmering

Not all boiled water is created equal. When you read a recipe and it mentions "simmering water," that does not mean you should throw the heat on high and wait for the bubbles. The difference between simmering and boiling water is about 30 degrees Fahrenheit, so it makes a big difference when you're cooking.

Simmering water should be much gentler than a boil; you should only see a bubble break at the surface occasionally, whereas boiling water should look like something closer to mayhem.

6. Cook Your Bacon In The Oven Instead Of On The Stove

If you've been cooking your bacon via a frying pan or skillet on the stove top, then you're creating more problems for yourself than you have to (and probably a grease burn or two, because ouch).

Cooking bacon in the oven, on the other hand, will decrease the clean-up, increase the quantity you can cook in one sitting, and TBH, it'll only improve the actual flavor of the bacon itself.

7. Don't Just Eyeball The Amount Of Spaghetti You Want To Cook

Everyone's been there: You open up the box of spaghetti, and you try to do some quick math in your head. If I twirl 12 spaghetti rods to make a forkful, and I want at least eight to 11 forkfuls of spaghetti, then I need... the whole package — definitely.

But if you're tired of realizing you actually made enough spaghetti for a small military encampment, here's a quick hack: The hole in the middle of your spaghetti spoon is perfect for measuring out a serving, according to Popsugar. Take a handful of spaghetti and see if it fits through the hole, then add or take away as needed.

8. Cook Enough In One Sitting To Last You For Days After The Fact

If you're taking the time to create any type of delicious meal, odds are that the ingredients you bought will provide more than one serving. Instead of portioning up each product (and leaving the rest to expire in your shelves and fridge), you should cook multiple servings.

Eat your meal as planned, then save the rest of the servings you cooked for the next week. This will save you time and money, plus it'll keep your wasting to a minimum.