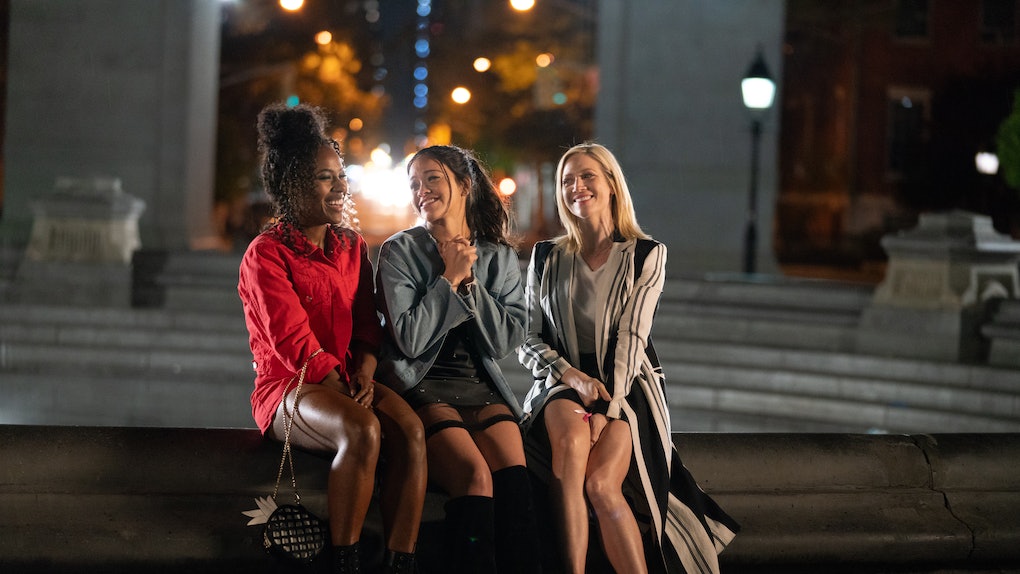 Nothing is more perfectly aligned with the weekend than a night on the sofa with your girlfriends as a movie plays in the background. We all have those nights when we're drawn to old Disney favorites or terrifying thrillers, but some of our most memorable movie nights are the ones that celebrate female friendship both onscreen and off. Whether you want to watch alone or with your girls, we have a solid list of girls' night movies that'll have you planning a hangout ASAP.

I can't be the only one with a soft spot for movies in which female friendships play an active, poignant role. Friendships can be messy, loyal, tense, hilarious, and everything in between, so we deserve stories that capture all facets of these bonds. Bridesmaids and Girls Trip are perfect for nights when you simultaneously need a laugh and a reminder that your girls have your back, but for now, we'll focus on titles currently streaming on Netflix, Hulu, or Amazon Prime as of April 2019.

Whether you're in the mood for a movie about your high school friends being your world or a flick exploring adulthood's effects on friendship, here's hoping you find something inspiring you to call up the ladies in your life.

Netflix's most recent original movie stars Gina Rodriguez as music journalist Jenny, whose longtime boyfriend breaks up with her when she has to move across the country for her dream job. It may read like a typical rom-com, but Jenny's constants throughout the movie are her two best friends, who remind just how awesome she is on her own. Someone Great emphasizes how your squad are often the ones at your side for life's highs and lows, and after watching the trio's last big night together in New York City, your group may be inspired to start planning a trip together ASAP.

Alexis Bledel, Blake Lively, Amber Tamblyn, and America Ferrera are best friends IRL as a result of filming this movie and its 2008 sequel, and if that wasn't great enough, their Sisterhood characters sum up the complexities of lifelong friendship. Spending their first summer apart, four friends use a pair of jeans that magically fits all of them to keep in touch, but family drama, young love, and sickness force them to realize that they're growing up.

Whether you like it or not, growing up often means unconsciously growing apart from your closest friends. But as The Sisterhood of the Traveling Pants demonstrates, your strongest friendships will often survive the tough times and become even more solid as a result.

Following Donna and the Dynamos through their post-college freedom in Mamma Mia! Here We Go Again is delightful, but our first introduction to the girl group came in Mamma Mia!. Based on the popular stage musical, the movie tracks bride-to-be Sophie's (Amanda Seyfried) quest to find her real father among her mother Donna's (Meryl Streep) three former lovers.

Donna's best friends come for the wedding, helping her out when she realizes her old boyfriends are in town, and Sophie is also accompanied by her two BFFs. Mamma Mia! may not make you and your best friend cry while hugging each other, but it will make you appreciate the ability to burst into song alongside your friends.

While the real focus of Dumplin' is a tense mother-daughter relationship and a love for Dolly Parton music, protagonist Willowdean begins her mission to sabotage her mother's beauty pageant with her best friend Ellen at her side. She and Ellen clash when the latter starts to enjoy the pageant culture, but Willowdean also builds a new support group consisting of her fellow beauty queen rebels.

In addition to Willowdean bonding with other non-traditional pageant contestants without resorting to cattiness, Dumplin's admiration of Dolly Parton ties in a message of self love. Learning to love and accept yourself is the greatest gift you can bring to a group dynamic, and this will hopefully resonate when you and your girlfriends follow up Dumplin' with a Dolly Parton singalong.

Contrary to the male-centric title, The Year of Spectacular Men is actually a coming-of-age story highlighting the bonds between sisters and their mother. Back to the Future's Lea Thompson directs the film and stars as the mother of her real-life daughters Zoey Deutch and Madelyn Deutch, who also co-wrote the screenplay. Madelyn plays a lost college grad who decides to embark on a year of experimental relationships and career moves, but the support of her mother and sister soon becomes crucial to her current life situation.

The family unit radiating throughout the movie tells viewers that some of their closest relationships can be with the women in their family. As people grow, they probably have less time for family members, but The Year of Spectacular Men reminds you that those bonds shouldn't be taken for granted.

Just like Dumplin', Lady Bird is remembered more for its ode to mothers and daughters, but it ends with a sweet dedication to Lady Bird's friendship with Julie. As high school or college winds down, the scariness of the unknown can often create weird wedges between your and your closest friends, and that's what happens to Lady Bird and Julie as their eventful senior year comes to a close. They find their way back to each other, recognizing that their time together is limited, and nothing is more relatable than saying goodbye to your best friend before a new chapter of your life begins.

Sarah Jessica Parker and her Sex and the City gang are definitely the epitome of onscreen female friendship. But before she hit Manhattan, SJP was rebelling at an all-girls high school with a dream of becoming a dancer in Girls Just Want to Have Fun. Her Janey quickly bonds with classmate Lynne (Helen Hunt), and the two embark on a quest to become cast members on their favorite series Dance TV.

A romance does overshadow the friendship in this movie, but the title alone strikes up memories of sleepovers, birthday parties, and nights out. Anyone up for Cyndi Lauper karaoke?

As one of Julia Roberts' first major films, Mystic Pizza is a must for rom-com fans, although it leans more on the serious side. Sisters Daisy and Kat work alongside best friend Jojo at a local pizzeria, but their humdrum routines change the summer before Kat goes to college. Jojo refuses to go through with her wedding, Kat babysits for an older, distinguished man for whom she develops feelings, and Daisy falls for a rich boy.

A friend group can hit a bumpy patch when they each explore romantic relationships the others may not approve of, but Mystic Pizza is proof that judgment should be tossed aside when your friends are struggling or in pain. When you're trying to help your BFF cope with heartache, remind her of Jojo's famous line, "I don't have to marry an a**hole, it's the '80s!". Have a pizza delivered during the pep talk and you'd make Julia Roberts proud.

What will you and your girl squad watch together?

More like this
These Fake 'Riverdale' Brand Names Are Even Better Than The Real Thing
By Rachel Varina
'He's All That': Premiere Date, Cast, Trailer, Filming News, & More
By Dylan Kickham
Is Netflix Making A 'To All The Boys' Spinoff Series About Kitty? Here's The Tea
By Rachel Varina
Stay up to date