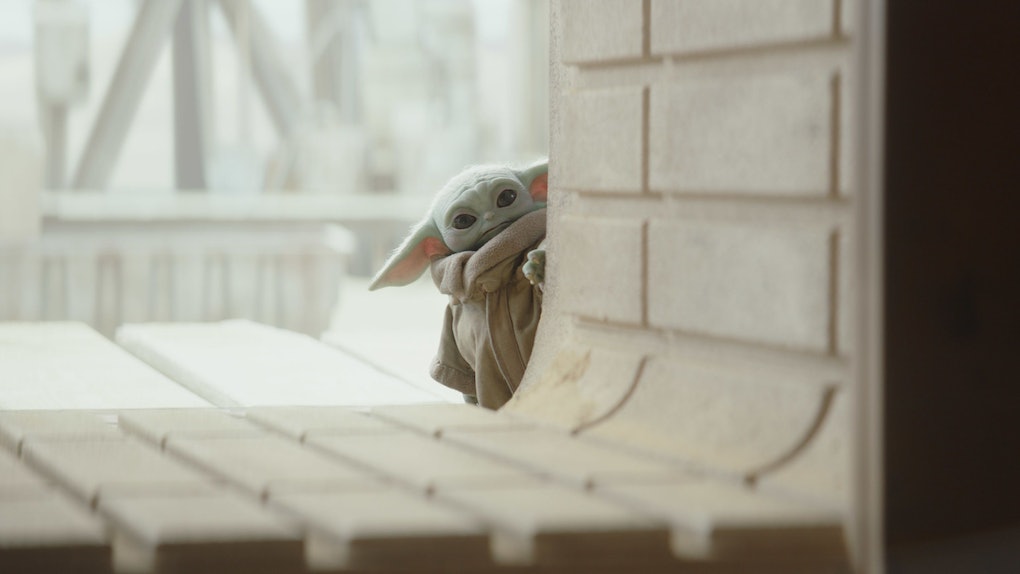 The Mandalorian is the first live-action series from the Star Wars universe. But unlike the films (or the animated series), the show does not directly tie into the Skywalker Saga. Instead, it uses easter eggs and references to create a shared universe and establish continuity with the films. That gives these callbacks outsized importance for viewers and means that fans check weekly to see what they may have missed. These easter eggs in The Mandalorian's Season 2 premiere are not only fun; some of them hint where the show is going next.

Season 2 is the first time the show has been back to Tatooine since Season 1. That meant the series got to reference itself, bringing back Amy Sedaris as Peli Motto, the owner of the garage where Mando parks when he's in town. She's still got her cute little droids too, which Mando seems to have changed his tune on since IG-11. Motto is full of references in her conversation, too. She establishes how infrastructure out in the galaxy's farther reaches is falling apart without the Empire to maintain it. (There's no one to even complain to.) And she mentions womp rats, a creature all those who grow up on Tatooine know well.

Here are the other references you may not have picked up on:

Mando's first stop in the episode contains an easter egg that throws back to the original Cantina scene in A New Hope, as he meets an Abyssin, a cycloptic alien race native to the planet Byss. Fans might not recognize the actor under all the makeup, but it's comedian John Leguizamo from the Ice Age films.

Fans may squee over Timothy Olyphant once again playing a Marshal as he did in Deadwood, but Cobb Vanth isn't someone The Mandalorian pulled from thin air. The Mandalorian armor-wearing character is originally from the Aftermath series by Chuck Wendig. In the novels, he has a similar backstory, though there he's a former slave-turned-sheriff. Here at least, he knows he should not wear the armor; on the page, he has no idea where it comes from, only that it works.

If Vanth's speeder looks familiar, that's because it may very well be. It's a modified podracer engine, the same kind that Anakin Skywalker once built. The show never says if it is the same one Skywalker once raced, but it's a definite nod to The Phantom Menace.

Speaking of Olyphant's tendency to play lawmen in small towns, the Weequay Bartender actor is another who tends to get typecast as well — as a barkeep, that is, not a Weequay. It's W. Earl Brown, who is famous for playing a barkeep in Deadwood. It turns out he and Olyphant have the same dynamic both in South Dakota and in a galaxy far, far away.

The Krayt Dragon is pulled from the now-defunct Star Wars Expanded Universe canon. This version is enlarged quite a bit from its initial description, which made it sound more like an oversized Komodo dragon. Instead, the dragon encountered here is redesigned to fit the skeleton that C-3P0 and R2 pass in the desert sands of A New Hope.

It's not clear if the Sarlacc pit is the same one where Jabba would throw his captives. But it's an obvious reference to Return of the Jedi.

6. The Orb In The Krayt Dragon

The "pearl" found in the dragon's tummy is another piece of Star Wars lore. A Krayt Dragon pearl, a digestion aid for the creature, is a highly valuable trophy. Also potentially significant: The pearls can be refined by trained Jedi to power a lightsaber. Baby Yoda will eventually need a weapon...

In case you thought that old, slow droid Peli Motto barks at looked familiar, it is. It's the same droid Uncle Owen decided not to waste his money on in A New Hope. Perhaps Motto should have done the same.

The most significant easter egg of the whole episode comes at the end, when Temuera Morrison, the original actor who played Boba Fett back in The Empire Strikes Back and Return Of The Jedi, steps on-screen. Whether or not he's actually playing Fett remains to be seen, but it's a reminder that, in the galaxy of The Mandalorian, the past is never dead. In fact, it's not even the past.

The Mandalorian continues Fridays on Disney+.

More like this
When Does 'Loki' Premiere On Disney+? Wednesdays Are The New Fridays
By Ani Bundel
'The Falcon And The Winter Soldier’s Finale Post-Credits Scene Hints At A Season 2
By Abby Monteil
Why Wasn't Dr. Strange In 'WandaVision'? Benedict Cumberbatch Was Written Out
By Ani Bundel
Stay up to date