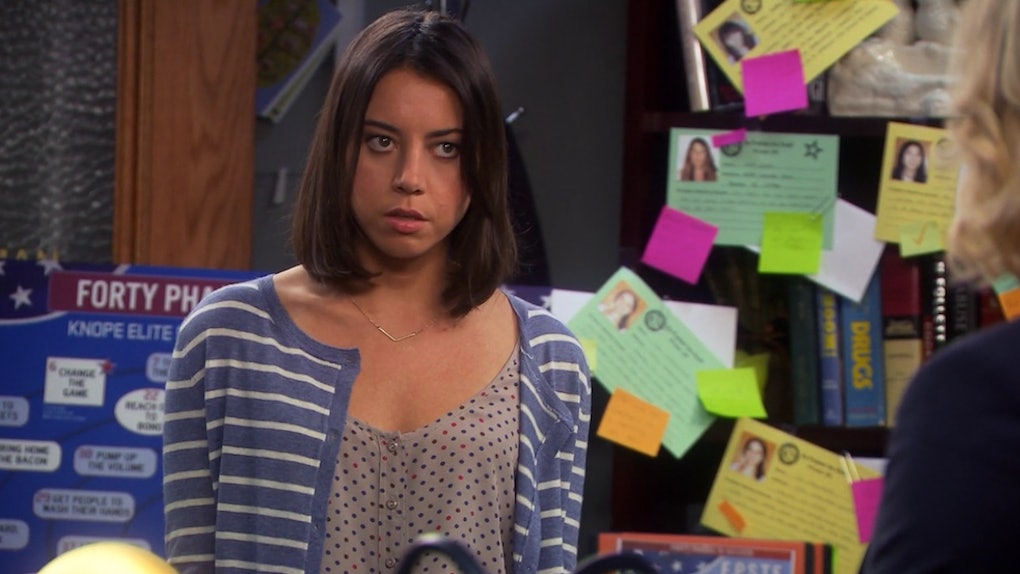 The season of giving is quickly followed by the season of thank you cards. And whether you're just tired of being fun and festive, or truly hate everything, it can be everyone's worst nightmare. We all want to show the people we love that we appreciate them, especially for all the time and energy they put into making us feel like a million bucks. But sometimes a simple card feels like way too much, or not enough at all -- and we forget there are plenty of ways to say thank you.

We're not all Olympic gift-givers, or care nearly as much as Leslie from Parks and Rec. I don't know about you, but her standard four hours of sleep a night just isn't going to cut it. I put naps on a pedestal. Sorry, friends.

But if we're anything like April, we've grown to know a sarcastic comment isn't always appropriate in the middle of a city council meeting, and that you just have to accept the hugs from Ann and Donna even if you don't want them.

People can be the worst, especially when they're stressed -- but we choose who we surround ourselves with, and my guess is that you chose a pretty rad crew, worth getting a little cheesy for.

It's like that meme that comes around Twitter every once in a while: What do you do when your mom deserves the world, but you have two dollars? Yeah, being broke and 20-something can make saying thank you even harder. So, thank goodness we came up with some creative ways to say thank you, inspired by April for the ones you love and love to hate.

1. Listening To Someone Is Always Appreciated

Let them rant to you about their biggest fears, hopes, and dreams -- even if they sound absolutely ridiculous to you. Just the fact that you listened to them babble on about it, and occasionally made a comment or suggestion along the way, will let them know you care.

April doesn't love Mouse Rat, but she listens to Andy talk about his band for hours -- suggesting new band names (Fleetwood Mac Sex Pants, maybe?), or singing along when she can. She also doesn't love politics, but when Leslie gets fired up about a project or a has a speech to make, she'll be the first to make a sarcastic comment in the pursuit of bringing her back down to Earth.

Sometimes, when you don't feel like saying anything, especially thank you, just lending a listening ear is enough. Your friends will truly appreciate it.

2. A Symbolic Present Is Thoughtful AF

Did you have a feminist victory with someone? Did you recently accomplish something together -- bake some cookies without burning them, win a soccer game, or survive a night out? Commemorate it with a thoughtful, and symbolic, present.

In a powerful moment in local politics, Leslie and April completed a trash route way ahead of the usual schedule, and got three new female workers hired. April used the opportunity to give Leslie a box full of garbage -- symbolic and thoughtful garbage, though.

3. Nominating Them For Something Will Make Them Feel Like A Million Bucks

You might not always have the right words to tell some they're amazing, or the courage to love something out loud -- but an award's committee will. Nothing says, "You're doing great," like a trophy, ribbon, or plaque dedicated to exactly that.

Just take it from April. She nominated Leslie for a big award for women in government that took the whole gang to London. It didn't take a whole lot of effort -- just a secret letter, and a moment of thinking outside of the box. Thank goodness for phase 13.

4. Being There For Them Will Show That You Care

When you hate everything, it's difficult to remind people that you really do care. Sure, you might find joy in stuff like napping or trash, but it's feelings nonetheless.

Showing people you care can be as simple as just being there. I once had a teacher who told me a majority of life is just showing up -- going to class, or that coffee date, or that dance recital, no matter how much it may drag. Presence means everything.

5. Donating To A Cause They Care For Will Make Their Day

Everybody has something they care about, even when they hate everything. For April, she loves animals -- mostly for not being people. They should be rewarded for that, right?

If you don't want to be loud and proud with your appreciation, find a cause somebody cares about and make a donation to it. You can send them a letter or an email from the organization saying that a contribution has been made in their honor.

There are foundations, non-profits, and funds for everything -- saving the turtles, curing cancer, or launching a new idea. You don't need to even love anything, you just need to know what they do.

6. Finding A Common Ground Brings On All The Good Feels

Sometimes, the best way to say thank you is just by relating to someone. Maybe you both equally hate everything, or love getting fully in spirit for Halloween. Use that common ground to make a connection.

People love feeling like they're understood, and you might find an unexpected friendship in a coworker or relative that, at first glance, seems like your polar opposite.

In April's case, she found an unlikely friendship in Ann. Having dated Andy and being one of Leslie's best friends, Ann and April end up pairing up a lot throughout Parks -- if even just to share some good advice.

When in doubt, you can always say thank you with a good, 'ole-fashioned thank you card. There is something about receiving a handwritten note from someone that just makes you feel appreciated. At the end of the day, it takes time and a postage stamp to send a letter -- and that folded piece of paper will probably be cherished more than you can imagine.