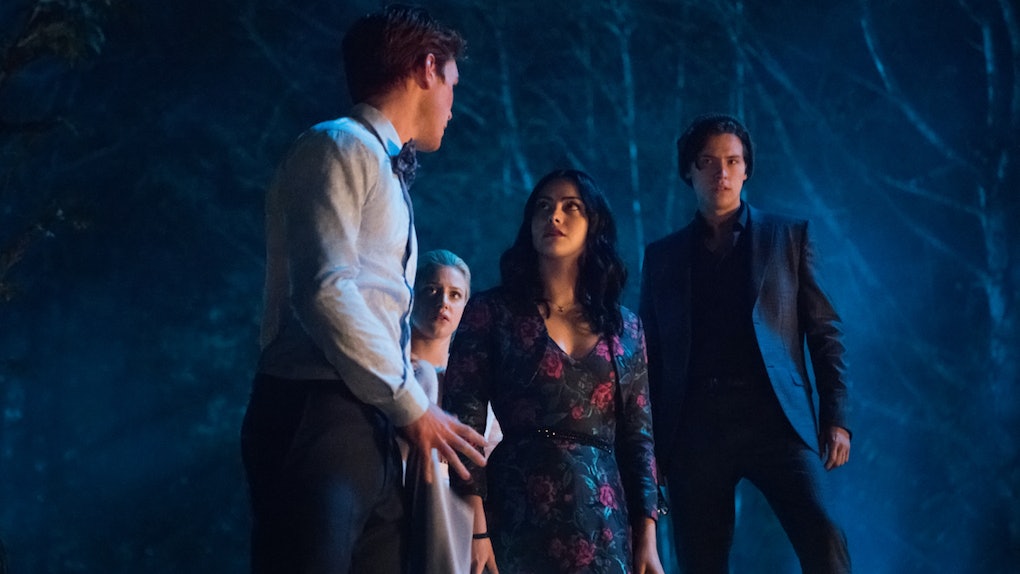 Although Riverdale's Season 3 finale did give fans answers to those big questions about the Gargoyle King, in typical Riverdale fashion, the climactic episode also left fans with about a million new questions to ponder while we all anxiously await Season 4. Since the finale was packed with so many twists and cliffhangers, it actually gave viewers a pretty good idea of what the next season might look like. Let's go over all the things Riverdale fans can expect in Season 4 that were hinted at in the Season 3 finale.

Spoiler alert: This post contains spoilers from the Riverdale Season 3 finale, "Survive the Night." After a season full of confusing mysteries, the finale episode of Season 3 finally delivered some answers. Fans learned that Penelope Blossom has been the mastermind behind both the Black Hood and the Gargoyle King this whole time. Not only did Penelope encourage Hal Cooper's homicidal rampage as the Black Hood, but when he went to jail, she also took his disciple Chic under her wing, reformed the teen runaway to be the spitting image of her son Jason Blossom, and had him become the Gargoyle King to continue in the Black Hood's murderous mission.

While the bulk of the episode centered on Archie, Betty, Veronica, and Jughead trying to survive Penelope's deadly obstacle course, the final moments of the episode were crucial in setting up Riverdale Season 4 (which the CW has already picked up). Let's go over the big questions from the Season 3 finale that most likely be at the center of Season 4's plot:

1. Is Jughead going to die?

Without a doubt, the most shocking scene from the finale was the last one, which was a surprise flash-forward showing Archie, Betty, and Veronica in their underwear and covered in blood about to burn their clothes in the woods.

As Betty instructs the clearly traumatized Archie and Veronica to burn their clothes, she also says that they need to burn Jughead's beanie. The clear implication is that Jughead was somehow killed, and the rest of the gang is trying to cover it up. So, does that mean Jughead's days are numbered heading into the new season?

2. Will Betty team up with her long-lost brother?

The mystery of The Farm is still unsolved, as the season ended with Edgar, Alice, and everyone else in the cult disappearing from town. However, an FBI agent informed Betty that Alice was actually never brainwashed and had in fact been working undercover to try to bring Edgar down. The FBI agent then reveals he is Betty's half-brother Charles Smith (the son of Alice and F.P. Jones that Alice gave up at birth), and it sounds like Season 4 will revolve around Betty and her newfound brother tracking down their cult-kidnapped mom.

3. Is Kevin going to be messed up?

The only member of The Farm that did not disappear with the cult was Kevin Keller, who ended up in tears after being forced to stay behind. Kevin is still fully brainwashed by the cult, and really has nobody left to turn to now that The Farm is gone. He may not be able to return to the old Kevin fans know and love in the new season.

4. How is Hiram planning to ruin Veronica's life?

Although Veronica managed to throw her mafioso father in prison and acquire all his properties, the final moments of the season finale reveal that Hiram has already cooked up a retaliation plan. We see Hermione getting arrested for conspiracy to murder Hiram, and then Hiram confirms with one of his prison guards that a certain piece of evidence has been planted. Then, Hiram seethes that Veronica has no idea what's coming. Neither do we, to be honest!

Archie's major hobby in Season 3 was boxing, but it sounds like Season 4 will see his interests shift more into social work. After Veronica gifts Archie the El Royale, he asks Mad Dog to help him turn the boxing gym into a halfway house or community center to help out the struggling youth in the area.

6. What is going on with Cheryl and Jason's corpse?

Cheryl Blossom has had her share of messed-up storylines on Riverdale, and it looks like Season 4 will be no different. The season finale revealed that Edgar Evernever had dug up Jason Blossom's corpse to air in his hypnotism of Cheryl, but strangely, rather than return her twin brother's body to its grave after escaping The Farm, Cheryl instead brought the body back to her home and began speaking to it as if Jason was alive. We already know how obsessed Cheryl was with her brother when he was alive, and now it looks like that obsession is being renewed with his dead body.

7. Will Penelope return for her revenge?

The finale ended with most of the villains taken care of: Hal Cooper was killed and Chic was thrown in prison. But Penelope Blossom managed to escape.

Since we now know that Penelope has been the mastermind behind all the terrible things that have happened in Riverdale, fans can bet that she will be planning some big revenge scheme that will likely be a major part of Season 4.