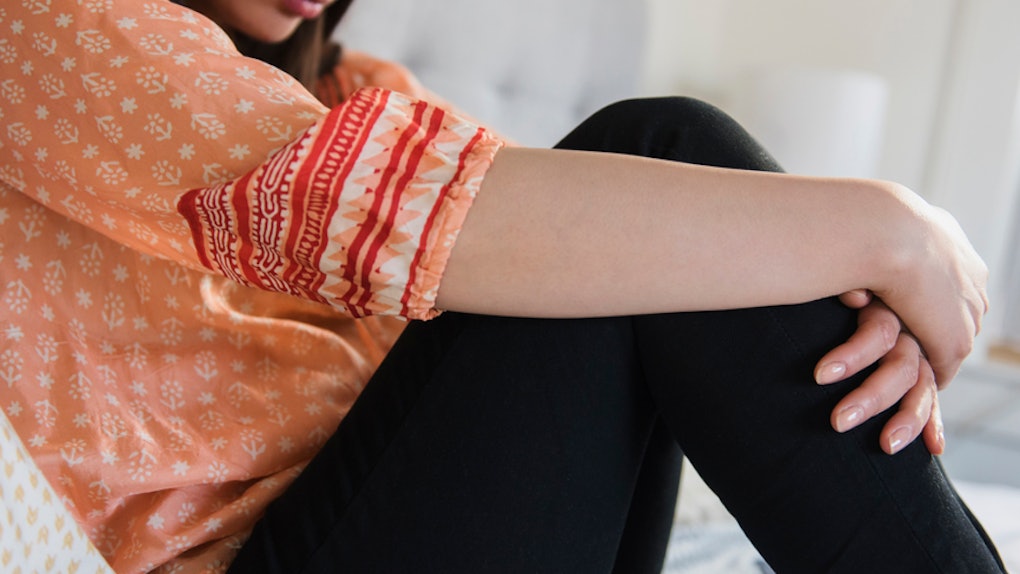 Anyone with a uterus can tell you there's a lot of stuff that comes out of a woman’s vagina, and isn't it a wonder to think most of it is just something that happens down there, with not much rhyme or reason? For once, I’m not referring to your period. Instead, I’m talking about vaginal discharge — you know, that kind of translucent, kind of white stuff you occasionally come across on your underwear? According to cycle tracking app Clue, vaginal fluid is not only normal, it’s also subject to change. Still, there are red flags in your discharge to be aware of because, despite the fact that discharge when you’re turned on isn’t the same as discharge during pregnancy, and that’s all fine, there are some discharges that are different in a bad way, too.

See, discharge gets its grotesque connotation from those unfortunate occasions when what’s coming out of your body is actually a really weird color, or looks kind of clumpy, or smells rank AF. Things like sexually transmitted diseases or infection, an overgrowth of bacteria, and even birth control can all lead to some interesting fluid development.

It’s really important to pay attention to any and all details having to do with what goes into your vagina, such as labels on feminine products, or using the right protection during intercourse. It’s also vital that you get to know your body and all its quirks, including the TMI stuff like the normal color, smell, and changes in discharge throughout the month. That way, if any of the following signs sound familiar, then you’ll know for sure it’s a red flag you shouldn’t ignore.

There’s good news and there’s bad news if you notice your vaginal discharge smells a little funky and is coming out with a yellowish tint. Let’s start with the bad news so I can offer you something to look forward to later on.

Stinky, yellow discharge translates to what the Centers for Disease Control and Prevention (CDC) call “trichomoniasis,” or “trich.” Trich is a sexually transmitted disease (STD) that develops from the passing of a parasite from one partner to another, and often leads to colorful discharge, “burning after urination,” and/or “redness or soreness in the genitals.”

It sounds pretty miserable, right? Well, the good news (sort of) is that trich is one of the most common curable STDs you can get. According to the CDC, 3.7 million people in the United States have the infection. Make an appointment with your OBGYN ASAP if you notice this particular pairing of discoloration and smell so they can prescribe proper medication.

2. It's Green And Reeks Of Fish

According to Planned Parenthood, a woman’s vagina is naturally swarming with bacteria, but if there’s an excessive amount of healthy bacteria being produced, due to use of feminine hygiene products that cause irritation, for example, a bacterial infection can develop, called bacterial vaginosis (aka BV). It just goes to show that too much of a good thing really can be bad.

Daniel Roshan, M.D., F.A.C.O.G, F.A.C.S, an assistant professor at the NYU School of Medicine, tells Elite Daily that women with bacterial vaginosis usually complain “of greenish discharge with fishy odor,” and note that the odor gets especially vile after sex.

Luckily, Roshan explains, BV can easily be treated with antibiotics via oral medication, or a medicinal cream or gel you can apply directly onto the vagina.

I don’t have to tell you that, when you become pregnant, your body starts going through some serious changes. But what you may not know is one of the very first changes to take place can be found in your vaginal discharge.

According to the American Pregnancy Association, vaginal discharge is totally normal during pregnancy, and nothing to be alarmed over (except, you know, if you weren’t trying to get pregnant in the first place). The discharge is referred to as “leukorrhea” and, Roshan tells Elite Daily, comes out milky white, “with no pain, no odor, and no itching.”

4. You Experience Chills Or A Fever, Too

Something to keep in mind when you’re experiencing discharge that looks off-putting, is how the rest of your body is feeling. When vaginal discharge is accompanied by symptoms such as “lower abdominal pain, pain during intercourse, fever, and chills,” Roshan tells Elite Daily, these are all signs that potentially point to pelvic inflammatory disease (PID).

According to Mayo Clinic, PID is an infection exclusively found in the female reproductive organs (lovely), and is caused by sexually transmitted bacteria dispersing from the vagina into the uterus, fallopian tubes, or ovaries. Depending on the level of severity, PID could cause only minimal symptoms. Either way, Roshan insists, the disease definitely requires medical attention.

Sorry, ladies, but that pink color you’ve spotted doesn’t mean your discharge is a girl. It can, however, translate to a few different things. In an exclusive interview with Elite Daily, Dr. Jessica Shepherd, OBGYN and U by Kotex partner, explains that a pink hue between cycles “is caused by a small amount of blood being expelled by the body and mixing with your cervical fluid.” If this is happening consistently, Dr. Shepherd says, seeking advice from your health care provider is essential.

Pregnancy and parenting website What To Expect also states that pink discharge can be one of two things: The first is ovulation bleeding, which just means that when a woman releases an egg from her ovaries during ovulation, “spotting is thought to be the result of blood” when the egg bursts from the ovary. The second potential cause for pink discharge is what’s called “implantation bleeding,” and it can happen about 10 to 14 days after a woman becomes pregnant.

Bleeding out of your vagina is normal (i.e. during your period), until it’s not (i.e. any time you’re not on your period). While sporadic bleeding could mean a few different things, such as ovulation, birth control issues, and infection, Alisa Vitti of FLO Living tells Elite Daily it could also be a sign of polyps on the cervix.

Make sure you diligently keep track of your period via notebook or app, like the My Flo Period Tracking App, and note details like when you’re expecting it, and how long each cycle typically is. If you notice bloody discharge at the wrong times, do not hesitate to give your doctor a call.

Last but certainly not least in terms of grossness, if your discharge is lumpy, you definitely have a case for your OBGYN.

Not to be too over the top, but if you do notice lumps in your discharge, zero in on those details. Does it resemble those awful cottage cheese cups your mom used to pack in your lunch box? If the answer is yes, Drs. Hedieh Asadi and Gunvor Ekman-Ordeberg of DeoDoc Intimate Skincare tell Elite Daily it’s likely you have a yeast infection which, thankfully, can be treated with over-the-counter saviors like Monistat. You'll be fine, girl, don't even worry about it.

More like this
Your Mars Sign Meaning Reveals A Lot About Your Sexual Needs, So Take Notes
By Roya Backlund
These 40 Clever Vaccine Selfie Instagram Captions Deserve A Shot On Your Feed
By Rachel Chapman
How To Not Get Pregnant After He Came In You & You're Freaking Out
By Rachel Shatto
Stay up to date