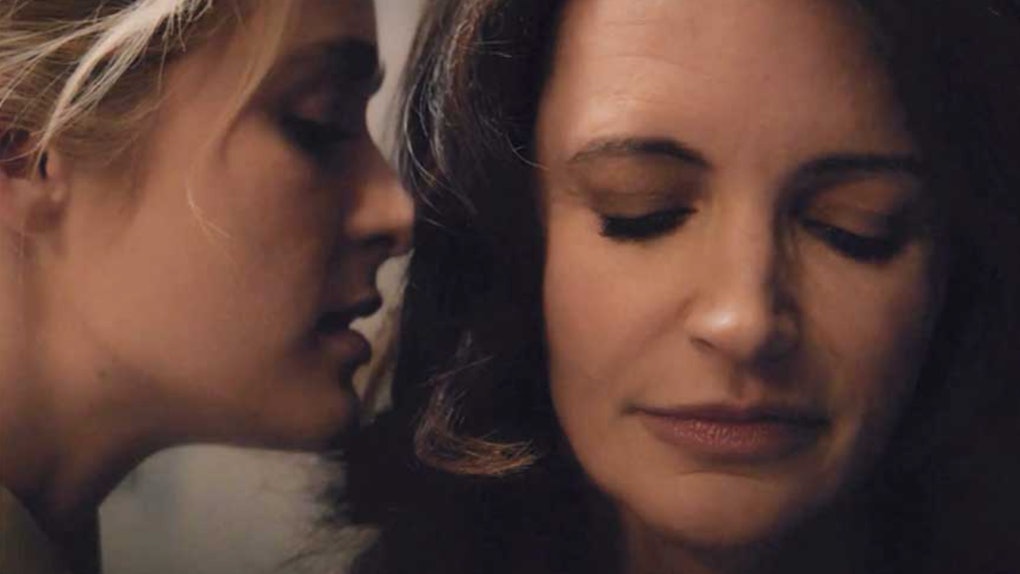 The hallmark of a good thriller movie is leaving fans wanting more as the final credits roll. But Netflix's new film, Deadly Illusions, takes that to the extreme. While part of the fun of the film is not knowing what's real and what's an ~illusion~, many viewers were frustrated when they got to the end of the movie and were still confused AF. After staring at your screen in shock for a few minutes, you've probably got some questions about that Deadly Illusions ending.

Warning: This post contains spoilers for Deadly Illusions. The film, which dropped on Netflix on March 18, is full of steamy plot twists. Kristin Davis (yup, that Kristin Davis from Sex and the City) plays a cigar smoking, retired bestselling author named Mary. After receiving an offer she can't refuse (aka a $2 million book deal), Mary agrees to write another installment to her popular novel series. After her friend Elaine (Shanola Hampton) suggests she get a nanny to help her get sh*t done, Mary hires Grace (Greer Grammer) and the two form an instant, intriguing connection.

What makes the film so confusing is that while Mary's writing her book, it becomes more difficult for her — as well as viewers — to tell what's fact and what's fiction. By the time the movie wraps up, it feels like there are more questions than answers. Here are the biggest ones viewers are still puzzling over:

That said, it's obvious the two had a strong bond that was borderline inappropriate (assuming at least the sunscreen and lingerie shopping scenes actually happened) prior to potentially engaging in any type of sexual activity.

This is one of the questions that was at least somewhat answered in the movie. In an effort to learn the truth about Grace, Mary visits Grace's aunt and learns Grace developed an alternate personality named Margaret due to her traumatic childhood. In a flashback, viewers see a young Grace trapped in a home and chained to a bed. The details are a little unclear, but by adopting the Margaret personality, Grace was somehow able to escape the imprisonment as a child.

It's Grace's "Margaret" personality who attacks Tom in the shower during one of the final scenes of the film, and presumably carries out most of Grace's misdeeds.

When Mary goes to visit Elaine after a fight, she discovers her friend has been murdered. The weapon, she realizes, is a pair of scissors from her home. After being detained by police and questioned as the prime suspect in her friend's death, Mary's quickly released. While the person behind the murder is one of the big mysteries left unanswered, there's reason to believe Mary didn't kill Elaine. First of all, at the end of the film, she visits her friend's grave and dedicates her book to her. Secondly, she was presumably never convicted of a crime.

More likely, Grace killed Elaine. In the scene when she attacks Tom in the shower, Grace (whose dangerous Margaret personality is in control) is seen in a tan trench coat, leather gloves, and heels, which is what the person who murdered Elaine was wearing, according to security camera footage. Perhaps that getup is what she wears when committing crimes?

5. Who Left The Hospital At The End Of The Movie?

In the very last scene after Mary visits Grace at the hospital, a woman wearing the same outfit as Elaine's killer is seen walking away. While viewers know the clothing is Mary's (she was seen wearing that jacket, jeans, shoes, and scarf when entering the hospital), the woman exiting wears the scarf over her hair and sunglasses over her eyes to hide her identity, just like Elaine's murderer did.

This could mean either Mary really did kill Elaine... Or, Grace killed/attacked Mary when she came to visit her in the hospital and escaped in the same getup she killed Elaine in. Considering both women have an affinity for that tan jacket, it could go either way.

One of the more bizarre theories circling social media is that Grace doesn't exist... or at least not the version that hooks up with Mary and attacks Tom. On March 20, the film's writer and director Anna Elizabeth James retweeted a tweet that said "What if this is just playing out the plot of her book?" So maybe Mary just used Grace as her muse and none of the really horrible stuff actually happened IRL. Perhaps it was all just a delusion in her mind as part of her writing process.

While there's no word as of March 23 about a Deadly Illusions sequel, at least one of the actors seems to think it's a good idea. Melissa Chambers, who played Grace's Aunt Lotty, tweeted her theory that Grace/Margaret killed Mary and escaped the hospital to kill again. She ended her tweet (which James liked) with a reference to "Deadly Illusions 2," which could mean if a second film happened, there might be more to Grace's story.

More like this
Is Netflix Making A 'To All The Boys' Spinoff Series About Kitty? Here's The Tea
By Rachel Varina
10 Rainy Day Movies To Watch On Netflix That Are Perfect To Pass The Time
By Kristen Perrone and Lexi Williams
10 Questions The ‘Schitt’s Creek’ Finale Left Unanswered
By Rachel Varina
Stay up to date