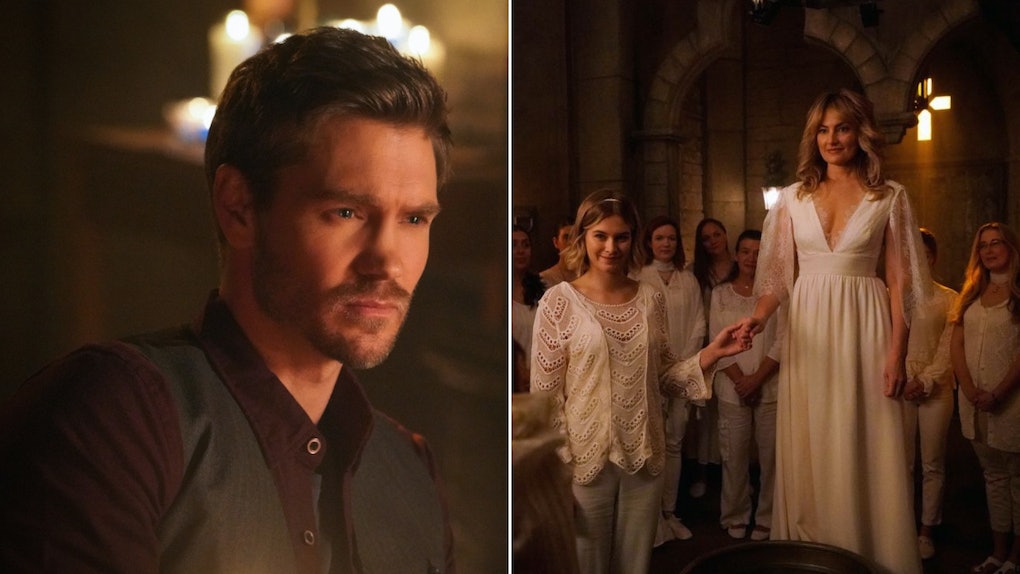 7 Questions 'Riverdale' Fans Have About The Farm That Will Make You Say "Wait, WTF?"

Between its mob bosses, jailbreaks, teen biker gangs, and 700 different masked serial killers, Riverdale somehow also managed to introduce an actual cult into the show. Riverdale began dropping seeds about The Farm in Season 2, when Polly Cooper went off to the commune to safely give birth to and raise her twins Juniper and Dagwood (those poor babies), but we really learned about The Farm's weirdness when the cult began taking over Riverdale in Season 3. Now, The Farm is everywhere, but it makes less sense than ever. These are just some of the questions Riverdale fans have about The Farm that prove nobody knows what the hell is going on.

Spoiler alert: This post will contain plot details from throughout Riverdale Season 3, up to and through Episode 18, "The Raid."

1. Is there an actual farm?

I mean, the cult is called The Farm... but we have yet to ever see an actual farm. The cult actually lives in the old Sisters of Quiet Mercy mansion now, which is very much not a farm. Were they on a farm before coming to Riverdale? If so, shouldn't that spot be important for them, since they named their group after it?

2. Why can Polly's babies fly?

Although this happened all the way back in the Season 3 premiere, we have yet to get an explanation for how Polly's newborn twins were able to fly! Betty catches her mom and Polly lifting the babies over a fire in the back yard, and they start floating in the air when Alice and Polly let go. Are we ever going to address this or what!?

3. Does The Farm magically cause seizures?

OK, I know that Penelope Blossom already said that the runoff of Fizzle Rocks from Claudius Blossom's drug factory getting into the town's water supply is what caused the outbreak of seizures in town, but that does not feel like the truth. As Betty pointed out, the seizures only seem to happen to women. Coincidentally, The Farm is predominantly made up of women — the only male recruits in The Farm are Kevin, a male Farmie who gives Betty and Veronica a tour of the Sisters of Quiet Mercy building, and... possibly Fangs? That question mark leads to the next confusion:

In the musical episode, Kevin and Fangs bonded over being haunted by Midge's death, and it seemed to lead to Kevin inviting Fangs into The Farm. Next thing we know, Fangs is dressed in white and performing some sort of induction/marriage (?) ceremony with Kevin as Evelyn watches on.

But then in the episode immediately following that, Fangs is back with the Serpents with no mention of him being in The Farm at all. Is he in or not?

5. Does Edgar Evernever have supernatural powers?

Although the Riverdale cast and crew have been adamant that this season is not supernatural, it is difficult to understand Edgar Evernever as a normal dude. When he was introduced at the end of the musical, he began a slow clap among a silent audience that only the rest of the Farmies joined in on, matching his clap exactly. Both Cheryl and Alice later claim that Edgar was able to let them speak to dead loved ones in the flesh. Can Edgar control minds or raise the dead? Or is this just going to wind up being some Fizzle Rocks-hallucination type of explanation?

6. Is The Farm just Scientology?

The prime example of modern cults is Scientology, and The Farm definitely gave a nod to the faux-religion by having Evelyn, Edgar, and other Farmies conduct personality interviews on potential recruits... and then store recordings of those interviews for blackmail later. Maybe Chad Michael Murray is actually just playing a version of Tom Cruise.

7. Is The Farm behind the Gargoyle King stuff?

This is undoubtedly the central question of Riverdale Season 3, since The Farm and the Gargoyle King have been the two biggest mysteries of the season. At this point, most fans suspect the two have to be related, especially since the Gargoyle King employs so much cult iconography and practices. Thankfully, this is a question that Riverdale actually will most likely give us an answer to at the end of the season.

More like this
When Will 'Riverdale' Season 5 Return In 2021? Its Mid-Season Break Is Long AF
By Rachel Varina
6 Facts About Mckenna Grace From 'The Handmaid's Tale' & 'Hill House'
By Ani Bundel
These Tweets About Beyoncé On Netflix's 'Selena: The Series' Are Too Much
By Dylan Kickham
Stay up to date